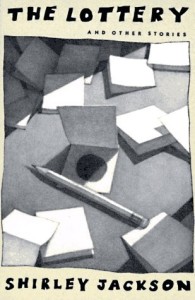 From time to time in my unorthodox career, I’ve found myself teaching a class—be it in ethics or literature or law—which includes a reading of Shirley Jackson’s horror story, The Lottery, first introduced in eighth grade English (or it was back in the day) and having the singular distinction of being the one story most retain memory of—even those who despise fiction.

I can’t possibly spoil the story by telling the ending, as everyone must’ve read it. So it is only memory that I prod when I relate that the denouement involves a contemporary American village’s annual custom of stoning a lottery winner—this time, a housewife and mother—all in order to make the corn crop grow. At least that’s the implied reason, as the purpose is left vague. The power of the story lies in the chilling nonchalance with which the ordinary townspeople conduct this yearly slaughter.

My students react with predictable disgust at the characters’ ignorance—“doing something for which they have no good reason,” it is often expressed.

But surely those are the wrong objections, I say.

“You’re faulting them because they’re illogical? Because there’s no real correlation between human sacrifice and corn growth?”

If so, what if there was a “good” reason? What if blood spill were actually to make corn grow, and science said that it did. Would that make the townspeople right? What if hunger could be eliminated, lives saved, etc., with the shedding of this particular character’s plasma?

And so the questioning goes, with the old utilitarian argument for the good set up against the old natural law one: A larger good justifies the dubious means that accomplish it vs. a good, no matter how large, cannot change the nature of, nor sanction the commission of, an evil meant to bring it about.

The exercise is useful because it flushes out the uneasy peace, willful complicity, and deliberate ignorance that so often stand in place of moral judgments now. But it’s also useful because pointing to real-world correlatives is so chillingly easy.

To wit, these headlines and news stories:

Planned Parenthood Has Been Selling Body Parts from Aborted Babies for at least 15 years.

For the squeamish, the links above take you to stories and videos involving accusations that Planned Parenthood, an abortion provider, has been selling the parts of aborted infants. Some of the charges suggest that babies are born alive, and even being kept alive, in order to harvest their organs and sell them for stem-cell research.

“A lot of people want intact hearts these days,” says senior director of Planned Parenthood’s medical services, Dr. Deborah Nucatola, in one video. “We’ve been very good at getting heart, lung, liver because we know that, so I’m not gonna crush that part. I’m gonna basically crush below. I’m gonna crush above and I’m gonna see if I can get it all intact.”

In another video, Mary Gatter, medical director of the PP Pasadena offices, is shown discussing abortion procedures with a supposed biotech salesman. Gatter offers to use “less crunchy” methods to abort babies so as to better obtain intact body parts.

And in yet another, a former technician describes the glee with which her supervisor tapped the heart of a child on the operating table, jumpstarting it into a beat, then told her to cut open the face in order to better access the brain.

The Congressional subcommittee on Oversight and Planning is looking into it all, as Planned Parenthood is taxpayer funded. Among the laws potentially broken is the Born Alive Infants Protection Act, which requires infants born during the process of abortion to be provided with medical care.

There is a fine context for this scandal. You can’t sell fetal tissue, regardless, under federal law. But you can donate fetal tissue from aborted babies. Planned Parenthood argues that the undercover videos show only efforts to reimburse the costs they undergo in the harvesting of the parts that they donate—i.e., that there is no profit involved.

So I return to my original objection made in my “Lottery” classes: is that really the point? Whether this is a commercial thing or not? What if it was the law that a baby’s parts could be harvested, regardless of whether she were alive or dead, if the intention were to donate the parts to stem cell research? Is it only a matter of legislative fiat and beneficent intent?

In the Nucatola video, the doctor explains how a baby can be positioned so as to allow for delivery up to the neck before killing and dissecting. This is of course a violation of the partial-birth abortion ban—but again, what if the purpose is to donate the parts to science?

Extract her up to the neck, then tweeze out her heart, kidneys, liver—and just use the verb “bequeath” or “give” or “contribute” when you do. You’ll get your tax deduction, just like you do at Goodwill or St. Vinny’s when you drop off your old overcoat and microwave.

In all the turnings of this macabre carousel, the law and science and commerce converge, dancing upon a set of semantic fictions too preposterous even for a child to believe in.

But there are plenty who play the game nonetheless. They spin the wheel. Cue the defenders of this practice, who scream that even to investigate this matter is to “wage a war on women and healthcare.”

Well, that doesn’t bother me a bit. Because I’m not playing. I do indeed set myself against any woman or man alike who does this abominable thing. Opposition to such inhumanity is justified in both its means and end. And if I am an exile to the scientific, legal, or cultural community for doing so, that’s just fine. I’ll happily play the outcast. Stone me.