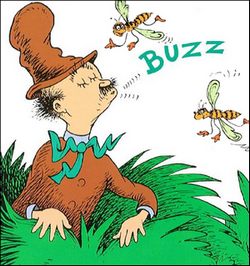 I am reading a biography of the theologian Dietrich Bonhoeffer, who was hanged in 1945 for his role in the plot to kill Hitler.

Suddenly the door opens and my two-year-old grandson, Alex, bounces in. Seeing the book, he attempts to climb into my lap so I can read to him as well. I put down the biography, pick him up, and select Mr. Brown Can Moo! Can You?, which is in the pile of books beside my chair along with Bonhoeffer’s Ethics and Letters and Papers from Prison, shifting instantly from the lead-weight of Nazism to the whimsy of Dr. Seuss.

Mr. Brown is an imitator extraordinaire of sounds. He can moo so well that a wide-eyed cow with blue horns looks on in stunned amazement. He can make the tick-tock sounds of a clock so convincingly that the clock changes its angle of repose out of respect. He is adept at the buzz of bees who, like the cow, look happily surprised by hearing their own sound emerge from a human mouth.

However, Mr. Brown’s most impressive imitation is thunder and lightning about which he gets so excited that he jumps up and down as yellow bolts zigzag around him. On the opposite end of the decibel scale is the silent kiss of two goldfish.

Theodor Seuss Geisel (Dr. Seuss) had a superb way of pulling listening children into his books. In Mr. Brown Can Moo! Can You?, which is subtitled Dr. Seuss’s Book of Wonderful Noises, he encourages them to make the sounds along with Mr. Brown. “I think you ought to try,” he writes. And my grandson does just that, hooting like the owl and popping like a cork.

There is one odd thing about Mr. Brown that most adults probably haven’t noticed. Never once in the book does he open his eyes. Like an opera singer with hands reverently clasped and head slightly tipped back, Mr. Brown has abandoned sight for sound. Even when standing on the back of a purple horse, his eyes are shut tight, and he is totally engrossed in klopp klopp klopp.

Mr. Brown lives fully in the present, or more accurately, the auditory moment he himself produces. About such strange goings-on, the horse looks blissfully happy. So does Alex.

I am not annoyed about having my concentration broken and my solitude taken away. In fact, even if my research demands both, there is something fundamentally right about it.

Bonhoeffer would have understood. He was interrupted numerous times during the writing of the Cost of Discipleship (which he composed in the late 1930s while running a seminary that the Nazis had declared illegal) and Ethics (which he wrote while deeply involved in the resistance).

Following his arrest in 1943, he read and wrote as much as possible in the enforced solitude of his cell. But he was often interrupted by guards, inmates, bombing raids, and work in the prison infirmary, taking the time to listen and to offer what help he could right up until the day he was hanged.

For example, on February 1, 1944, he wrote to his friend Eberhard Bethge about a terrible bombing raid on Berlin that had blown out the prison windows the night before. In the morning, some prisoners and guards had sought out Bonhoeffer for comforting. He wrote in his letter:

But I’m afraid I’m bad at comforting. I can listen all right, but I can hardly ever find anything to say. But perhaps the way one asks about some things and not about others helps to suggest what really matters; and it seems to me more important actually to share someone’s distress than to use smooth words about it.

Occasionally, Bonhoeffer broke off mid-sentence, writing “Enough of this; I’ve just been disturbed again” (May 29, 1944). But later he picked up his chain of thought as imperturbably as if nothing had occurred.

Similarly, the life of Jesus can be seen as perpetual interruption. I have often thought the disciples must have fumed at his inability to stay on schedule and get things done. Jesus would never have adhered to a prioritized things-to-do list. There was always one more child to hold, one more sick person to be healed, one more anxious person asking a hard question. Never impatient or self-absorbed, Jesus knew, as Bonhoeffer put it, “what really matters.”

And so my grandson and I finish Mr. Brown Can Moo! Can You? The last sound he makes is the soft whisper of a butterfly, very soft and very high.

“Maybe YOU can, too, I think you ought to try.”