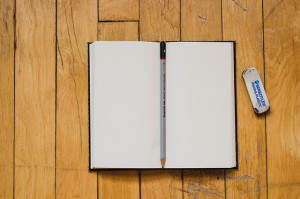 “They tended to accommodate any means in pursuit of an uncertain end,” she says, unsparingly. “They tended to avoid dwelling on just what that end might imply. When they could not think what else to do they moved another thousand miles, set out another garden: beans and squash and sweet peas from seeds carried from the last place. The past could be jettisoned, children buried and parents left behind, but seeds got carried.”

I wondered, when I read this, how much Didion was thinking about her own patterns of coming and leaving. She told the Paris Review in an interview in 1977 that “the only reader I hear is me. I am always writing to myself.”

And nearly forty years earlier, she had started her famous essay about being young in New York City, “Goodbye to All That,” with these words: “It is easy to see the beginning of things, and harder to see the ends.”

When Joan arrived in New York around 1960, she took the bus from LaGuardia to her hotel, home to the boy she already knew she wouldn’t marry in the spring, and thought about how her dress, which had seemed perfect back West, was all wrong there in the city of bright lights. Tiny and twenty years old, she shivered through the weekend shut up in the hotel room because she was sick and wet and it never occurred to her to turn the air conditioning down.

Was anyone ever so young?

When I first read “Goodbye to All That,” I was twenty-one and new to New York, and saw only Didion’s wonder, all the ways that New York was magical to her when she was first falling in love with the place, like I was—staying out all night, eating peaches on the curb, watching the bright lights.

When I got to the end, when she has stayed too long at the fair and is feeling weary of the whole thing, I started skimming the text. I skimmed because I didn’t get it.

I didn’t want to get it.

My parents and I had found an apartment for me, and they drove the three hours south from Albany to Manhattan two weekends in a row to buy furniture and help me set it up and move in.

I am ashamed now to remember that I took this for granted. I was young and moving out of their house for the first time and excited to be gaining, at last, my own freedom and independence. I was preoccupied because my boyfriend would be moving away soon, to Ireland, and I was nervous about being apart from him, nervous about how that would change our relationship, and nervous (I suspect now) because he was that boy I knew I wouldn’t marry in the spring.

But mostly I was too young and foolish and inexperienced to know that this time would pass quickly, that the beginnings of things are not forever.

That a year later I’d be at my father’s funeral.

When, after the moving, it came time for my family to head back home, I was afraid there would be a huge fuss. But by chance, my boyfriend’s family was also in the city that weekend, and so when he asked me if I could go see a Broadway show with them after my parents left, I told my family that’s what I’d be doing that evening.

I can’t even remember where my parents and I ate dinner, or if we ate dinner together, or if they left early for my benefit and disguised it as “getting home at a decent hour”; I do remember standing on the stoop watching the taillights of their minivan driving away. I was thinking of Mom swallowing to keep a smile on her face, and me saying, like it was no big deal, I’ll see you guys in a couple of weeks, and Dad’s kiss on my forehead.

The leash was cut now, and I was free, but I didn’t comprehend or want to comprehend what precious things are lost in new beginnings.

I am addicted to newness, obsessed with beginnings. I love the first month of school, the foam head on a new pint of stout, a computer that hasn’t had software installed on it yet, TV show pilots. First love, new friendships, fresh ideas.

Beginnings are unmarked by my failures. The smooth white pages of a new notebook don’t have my misspellings, my scratch-outs, the silly thoughts I’m embarrassed to re-read a year or five later.

Finishing college and deciding to move to New York City was, for me, like for Joan, like for a million other girls, a new-notebook moment. The old hometown one was spiral-bound and childish, filled with doodles of boys I’d liked idly and at a distance, chicken-scratched efforts at growing up that often ended in embarrassment, precocious childhood stories, insecurities, and bad hair and braces, all things that made me grimace when I thought of them.

New York beckoned like a black, hard-backed Moleskine, smooth to the touch, wrapped with a sturdy black elastic and just waiting for me to blossom into a self-assured, creative young woman who had nothing to be embarrassed about, who looked appropriate and read the right books and could talk to anyone. I could shove Albany onto a shelf and forget about it and go start the rest of my life.

I like endings, too, but only because they mean new beginnings. Since I was twenty-one, I have ended one long-term relationship, moved four times, quit five jobs, finished hundreds of books, and changed churches twice. I initiated all of those endings because something better and newer was available.

But as Joan says, the beginnings of things are far clearer than their endings, and I never anticipate how something might end when I begin it. I pounce on newness and expect it to stay that way forever, like a pair of shoes that I’m dismayed to discover needs re-soling and a bit of a shine after the first year.

My first youthful, thoughtless leaving was over a decade ago. I am thirty-two now. I am learning new things.

At the end of her essay, Joan leaves New York for Los Angeles. California is newer, more malleable, more open to change.

I’ve stayed in New York. But I love going to Los Angeles, running through Old Town in Pasadena, watching the mountains come into view as I fly toward the coast, driving fast around the freeways that arch past the city lights at night.

Sometimes it beckons to me, shiny and new, with no mistakes in it. At times, with no idea what to do next, I have paused and contemplated jettisoning the past, heading west.

But the lesson I am learning as I grow older is this: The most precious things in life come from staying.