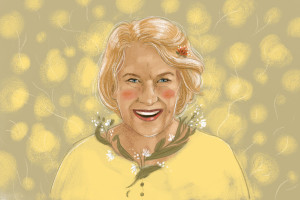 The following appears as the editorial statement in Image issue 88.

There is no such thing as an artist: there is only the world, lit or unlit as the light allows. When the candle is burning, who looks at the wick? When the candle is out, who needs it? But the world without light is wasteland and chaos, and a life without sacrifice is abomination. What can any artist set on fire but his world?… What can he light but the short string of his gut, and when that’s burnt out, any muck ready to hand? His face is flame like a seraph’s, lighting the kingdom of God for the people to see; his life goes up in the works; his feet are waxen and salt. He is holy and he is firm, spanning all the long gap with the length of his love, in flawed imitation of Christ on the cross stretched both ways unbroken and thorned. So must the work be also, in touch with, in touch with, in touch with; spanning the gap from here to eternity, home.

Few books to come across my desk lately have stirred so many emotions as The Abundance: Narrative Essays Old and New by Annie Dillard. In the Atlantic, the critic William Deresiewicz says that the book “might just as easily be called The Absence,” because the author has published nothing new for years. It’s a clever lead-in, but devoid of substance. Our online culture, with its constant demand for hitting the feeds at peak times every day, may dictate constant publication unto death as a requirement for any self-respecting author, but thank God Annie Dillard grew up before the advent of the internet. I prefer to look on her body of work and celebrate the abundance.