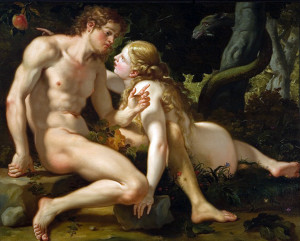 The Genesis story of the creation of Adam and Eve: poets for centuries have been attracted to it. They wonder: what was in God’s mind? In Adam’s? In Eve’s? Poets wonder and re-envision the scene. Richard Chess, in “When God Dreamed Eve through Adam” (Image #85), chooses to stay in Adam’s mind—and chooses to craft most of the poem as a long subordinate clause. The eight stanzas that hold us in suspension in this extended “when”-clause imagine Adam’s complex of emotions at his first sight of Eve. Then finally Adam crashes down into the grammar’s main clause, into a fear and terror “which he couldn’t tell from wonder”: the recognition of his and Eve’s profound “difference.” Now suddenly Adam, alarmed, sees everything in the world tossing up its “difference.” This, the poem suggests, is the free will that God gives us: will we let our differences become disastrous, destructive? Or will we enable them to “grow” as God dreamed they could?

When God Dreamed Eve through Adam

When Adam saw her, muscle of a new day,
when he squatted to smell the musk
between her legs, when he leaned down

To grasp the wrist of the most familiar
creature he’d encountered yet, to pull
himself, the mirror image of himself, to her feet;

When he took a few steps back
to appraise her with the mind of sun,
the heart of moon, to praise her

With the applause of leaves bestirred,
to seduce her with the iridescence
of lizard skin, to navigate into the current of her

And be powered and transported like a fish
through a diaphanous river’s shadow and light,
to know her with every cell, every molecule, all

The atoms and elements that spun into his inception—
with all creation pulsing
in his temples, his wrist, with his unique

Talent, endowed in him by his creator, to see
beyond the moment’s garden
all the way into the geneticist’s lab,

And he was frightened, the first, the original
terror which he couldn’t tell from wonder
as he stood there regarding what was made

Of the same stuff as he yet utterly strange—
how the world around him even then
was tossing up difference after difference,

When god dreamed Eve through Adam into being.