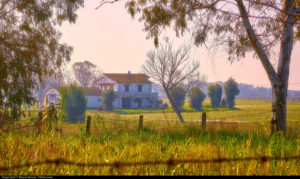 A few years ago, we invited the newest neighbor in our rural intentional Christian community to help us slaughter the chickens we had raised for meat.

Our neighbor told us about his guest up the hill; he was visiting from the city and he was a strict ethical vegan. Our neighbor warned his vegan friend, whom I will call Tim, what would be happening down the hill that afternoon. So early that morning, Tim visited the doomed fowl and blessed them before death.

I appreciated such a blessing on our chickens. Blessings over animals before slaughter have been part of animal killing in many traditional societies. Some Native American tribes would ask for forgiveness for taking the life of the animal and then offer thanks for the provision of its life for sustenance.

When he was in West Africa serving in the Peace Corps, my husband participated in the killing of an animal during a festival. In keeping with Beninese tradition, he offered the animal a sip of water before he took its life, as a sign of respect.

With my thoughts on these blessings—as I captured each chicken and brought it to my husband—I said a prayer of thanks for this creature. I prayed that we had given it a good life and that it would die quickly.

My husband began the process with a pained look on his face as he forced a chicken into the killing cone. The wooden post pounded into the ground that held the metal cone was splattered with the bright red blood. Another farm worker with an easy laugh, took an irreverent pose, cracking jokes about dead chickens.

Just as my husband killed the first chicken, I saw Tim coming down the path toward us. I was unprepared for the emotion that he brought with him. At first, I stood near him, asking him if he was okay. I felt for him because I could understand his position; at one point in my life, I too had protested animal slaughter with my food choices.

The animal-eating ethic of many Christians focuses on the passage in Acts when “a floating sheet made all things clean to eat!” According to this stance, God’s insistence that Peter eat (in a dream) what he formerly thought was unclean made those things clean for all Christians.

But some theologians and Christians take another view, citing Isaiah 11:6 as part of their ethic for eating: “The wolf will live with the lamb, the leopard will lie down with the goat, the calf and the lion and the yearling together; and a little child will lead them.”

For those Christians, this Isaiah passage describes a new heaven and new earth in which predator and prey will live in harmony. In her essay “God, Christianity and Meat,” Kathy Freston suggests that many theologians believe this “permission to eat meat” in Acts is actually “a concession to human weakness” and that we will once again live as we would’ve in Eden, as vegetarians.

As we continued with our task, Tim became more vocal in his protestations, looking increasingly downcast with killed chicken, muttering that there was no humane way to slaughter an animal. He asked to hold one of the chickens before it died, stroking it and saying longingly, “peace be with you,” as my husband took it from his grip.

Slowly, my compassion turned to annoyance. I understood his stance on eating but I resented that his presence changed the tone of something that was supposed to be a community project. This was our home and our place of business. We had chosen to live and work on a farm; we worked hard to raise our food in the most ethical and, in my mind, most Christian ways we could.

When the slaughter was finally over and Tim left, my husband commented, “We give our animals a good life. And in the end, they are chickens, not people.”

I must confess, that in the years since Tim interrupted our chicken slaughter, I am still torn between these two ethics. I have come to believe that we can show respect and care for animals by giving them good lives, lives that allow them to eat what their bodies were designed to eat, lives that gave them room to roam and grow.

But I relate to the other ethic, and particularly what so many Christians long for, a time when God will make all things new and death will be no more.

Farm life has taught me many things but most strongly that our general culture is averse to facing the difficult things that many of our ancestors couldn’t escape. I sometimes feel a kinship to the irreverent approach of Joel Salatin, a quirky environmentalist farmer and Christian (of Food Inc. fame) who has been raising and selling meat on his family farm for decades.

Salatin stresses the moral importance of providing animals with good lives and ethical deaths. In response to those suggesting that even ethical animal slaughter is cruel, he says that when visitors come to his farm, it is their children who can handle the process best:

The 7- to 12-year old children have no problem slitting throats while their parents cower inside their Prius listening to “All Things Considered.” Who is really facing life here? The chickens don’t talk or sign petitions. We honor them in life, which is the only way we earn the right to ask them to feed us—like the mutual respect that occurs between the cape buffalo and the lion.

I certainly don’t think that all people who have decided to abstain from meat or animal products aren’t facing life. But I think Salatin is making an important point, a point, however, that doesn’t go far enough about what our culture has trouble facing.

Though it spun out of perhaps even his control into a sad protest, I think Tim visited our chicken slaughter because he was trying to educate himself about farm animals. What the experience likely gave him was confirmation that his protestations were valid. Even if I disagreed with Tim about his manner of expressing his choices to our group, I can see now that he was trying to face into something difficult.

In his fumbling way, he was trying to face death. And in the end, that’s something I can respect.

Image above by Moyan Brenn, used with permission under a Creative Commons license.