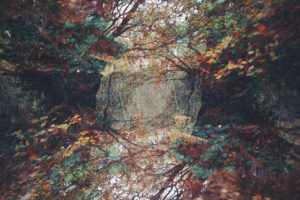 Though its fruit should’ve been in season, too many harsh Midwest winters left the leaves of the apple tree to wither. At the time of harvest, very little fruit hung from its branches.

But my daughter climbed anyway, her arms wrapped around the low-hanging branches, her feet bouncing against the trunk so she could swing herself up. She climbed all over it, picking the seconds, tossing them into the buckets circling the tree.

I was travelling to Texas while she climbed, so it was later that my friend told me that poison ivy crept along the trunk of the apple tree and into the branches.

All the while, I was at lunch in Texas with my ill father, laughing at the dark jokes of grief with my mother and sisters, and making lists of the things people should not say to someone with cancer, things like “my aunt had the same kind of cancer and it was awful. She died very painfully,” or “don’t you know how many poisonous chemicals they put in chemo?”

While I was doing these things, urushiol (the toxic oil in poison ivy) was travelling down a well-worn path over the skin of my daughter’s face. I’d seen her make the gesture before I left for my trip; I suppose she thought that being all the way across the room from the Kleenex box was too far away to stop the involuntary swipe of back of the hand so that the mucus from her runny nose made a smeary path, from the nose, to the cheek, to the chin.

Her poison ivy rash travelled the same path over her face. And spread everywhere in patches on her torso and arms.

“Will it still be here on my birthday party?” my daughter asked me on Monday when I returned home.

The truth was, I didn’t know. How long do these things last?

I decided to be honest: “It will be better on Saturday but it probably won’t be gone.”

I knew she was disappointed but she soldiered bravely on even as a couple of her classmates ran away from her at school, crying out that she was poisonous.

Party preparations were taking over my entire week. The hours I usually spent writing were filled with chopping onions, baking cakes, grocery shopping, and looking for just the right party favors.

During my week in Texas, I’d spent a wakeful night obsessing about the party invitation list, worrying in turns that I’d forgotten someone, and that too many people would show up. To help me cope, my party-planning sister, wishing she could help me on the day, spent hours online, emailed me the links to buy all the supplies, and took me to Target to buy themed plates and tablecloths that I stuffed into my suitcase for the flight home.

In the middle of the Target trip, I felt a panic uncurling—the simultaneous desperate need for more air along with the lack of energy necessary to take more breaths.

My sister, well acquainted with anxiety, put her hand out in a stalling gesture. “Let’s just step back a minute and simplify. Kid’s birthday parties are always crazy. It’s going to be fine.”

Her gentleness momentarily settled me but the anxiety still rumbled under the surface, following—like urushiol—the same well-worn path of grief and worry. I began to feel the familiar guilt too: why was I obsessing so much over this party when I could hardly cry at seeing my father?

Dry-eyed, I’d held my sister all the way through church as she wept, as the congregation recited Psalm 23: “Even though I walk through the valley of the shadow of death, I will fear no evil…Your rod and your staff they comfort me.”

I suppose I was experiencing a boringly common psychological defense mechanism: displacement. But accessing my grief would just have to wait. I had a party to plan.

My daughter woke the morning of the party with light leftover patches of the rash. She looked positively regal in her Cleopatra costume. Her costumed friends piled out of cars, breaking free of the confines of a long school week to jump on hay bales, pop giant bubbles, and take a few swings at a piñata.

In a quiet moment, as I sat on a hay bale in front of the fire, the anxiety murmured. Even as I inadvertently swept it away, I knew that it would eventually return to the surface, that it must itch and burn first before it could heal. In the meantime, the sun shone into the cool afternoon, brightening the forest behind us into the colors of fire, seeming to bless my daughter’s eighth year of life.

The leaves fell and blew away, not withered like those from the apple tree but releasing themselves in a way I could not, into the inevitability and grief that come from the seasons that must always separate life and death.

Christiana N. Peterson lives with her family in intentional community in the rural Midwest. Her forthcoming book with Herald Press is about the Christian mystics and life in community. You can find more of Christiana’s writing on her blog at christiananpeterson.com and follow her on twitter.

The above image is by Richard P J Lambert, used with permission under a Creative Commons license.