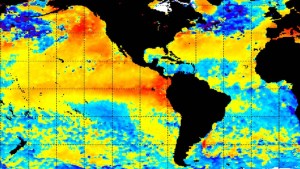 Of course you’ve heard of “El Niño.” And you know that it refers to the Pacific Ocean’s warming spells, which can cause heavy rains and even cyclones in the tropics. But did you know that El Niño (Spanish for “the boy”) is so named because it occurs around Christmas time? And did you know that there’s a sister phenomenon, “La Niña”—a cooling ocean effect that also causes major climate events? In her poem “Advent,” Ava Leavell Haymon takes these climatological facts and brilliantly conflates them with the coming of the Child which we await during the Advent season. “El Niño crawls in the manger, time runs out / El  Niño rocks himself dry on the edge of a continent.” Then “the weather channel shows us rain / Angels proclaim in vain…” This Boy’s coming will not evoke the sweet sentiments of Christmas cards. No, it brings cosmological turbulence: “Comets snuff out in dirty skies: Lovers of chaos, / computers roll back their zero eyes  The trumpet cries…” We pray to Los Niños to “spare us,” but their answer— “We have come for the children” — has a sinister undercurrent. That “for” is intentionally ambiguous. It could mean “for the sake of,” which is the usual Christmas message. But “come for” could also mean “to take the children away,” which a killing cyclone will certainly do. Here is a poem that makes us think twice (or three times or more) about what Advent brings.

El Niño slips across latitudes, rises dripping from the ocean
From seafloor mud, El Niño brings up the secrets of childhood
El Niño crawls in the manger, time runs out
El Niño rocks himself dry on the edge of a continent
Prairies of wheat go unpollinated, there is rumor
El Niño is killing the honeybees

The Niños hear their names on the news in every language
The Niños bankrupt distant cities with mudslides
Comets snuff out in dirty skies Celebrities seduce us
away from the guides in our dreams Lovers of chaos,
computers roll back their zero eyes The trumpet cries
Los Niños in a loud voice Faces on billboards draw closer

La Niña, we pray, and El Niño, her brother
We long for sweetness and scale
Our tables sag under piles of unsorted papers
Spare us, Niños We don’t know winter from summer
Above the trade winds, ozone crackles
their answer: We have come for the children

Ava Leavell Haymon writes poems and plays. She teaches poetry in Louisiana and directs Guadalupe Mesa Studios, a writers’ and artists’ center in New Mexico. Her poems have appeared in the Southern Review, Poetry, Prairie Schooner, and Northwest Review, and in five chapbooks, most recently Why the Groundhog Fears Her Shadow (March Street). Louisiana State University Press has published two of her collections: The Strict Economy of Fire andKitchen Heat. She was awarded the Louisiana Literature Poetry Prize for 2003.