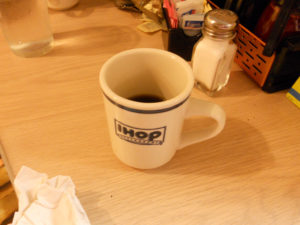 The fact that a half-hour meal alone in an IHOP occasions its own blog post shows just how far I’ve devolved in my practice of solitude.

I’ve gotten pretty good at putting my phone away when going out for meals with friends and family. But when I’m alone in a waiting room, in line at the store, or even on the sidewalk waiting for the pedestrian light, I reach for that phone like an itch.

Of course I love the convenience and connection of mobile technology. I usually choose e-books over paper (I’m ducking virtual fists as I type this) and cultivate dozens of deep friendships online. But I can barely sit by myself, even for more than a minute, without running my fingers over that screen. It’s not so much that technology itself has ruined me. I’ve forgotten how to sit, how to just be—period.

If it’s not a phone, it’s a book, magazine, or even a prayer to distract me.

Yes, even consciously choosing to speak to God when I’m alone can become a way to remove myself from the terrifying boredom of silence.

When traveling alone this past week. I decided to cross the parking lot from my Red Roof Inn to grab an omelet at IHOP for dinner. I meant to bring my Kindle but realized I had forgotten it. The rain was coming down too hard for me to run back to my room. But my phone, as always, was in my purse.

As I confidently asked for a table for one, I considered an impossible mission: What if I ate an entire meal without looking at my phone, without even picking up an old newspaper or jotting notes on a napkin?

In a 2013 Conan O’Brien episode, Louis C.K. talks about how phones have basically removed the ability to “just be a person” who can sit there and experience the emotions that surface from being alone. As an introvert, I claim that I enjoy being by myself. But is that really true?

The hostess sat me in a window booth and handed over the menu. This was the easy part. I had an array of skillets and omelets to study with purpose. Then, once I placed my order and the server disappeared with my laminated companion, the challenge really began.

I instinctively reached for the side pocket in my purse, where I’ve kept my cell since I got my first smartphone in 2011. Then I stopped and placed my hands in front of me on the table. I stared straight ahead. There was no reason to look down. Yes, this was unsettling.

I could have said a silent prayer or whispered the first chapter of Ephesians, which I’ve been attempting to memorize. But I just let my brain go lax as my eyes landed on whatever was in front of me.

Most of the tables, even ones without customers, had copper coffee pots sitting near the edge. What if I want to write about these later? I thought. My hand went toward my purse again: time to snap a picture. But I couldn’t. Or, I should say, wouldn’t. This was a choice.

I had the power to just be a person, an unproductive, unconnected person, sitting at a pancake house in Lafayette, Indiana.

This is what I remember:

The coffee pots shone like my daughter’s penny-colored hair.

The iron designs on the hanging light fixtures curled like treble clefs.

Out the window, work-traffic taillights bled into the reflective streets.

An IHOP employee worked on stringing Christmas lights on the partition between the dining room and the kitchen. The multi-colored bulbs clacked against the glass as she tried to balance them. She eventually gave up, allowing two-thirds of the strand to pile up on the floor.

The bubbly rusts, browns, and blues of the upholstery on the empty seat across from me suggested the hair of my daughter again—actually, the hair and eyes of all three of my children—which surprised me. I travel all the time, and this was just my first day of a weeklong trip. Was I missing them that much already?

The server—strangely, I do not remember what she looks like—brought out my omelet overflowing its folds with spinach and tomatoes. I focused completely on the interplay of half-ripe November tomatoes with melted Swiss cheese. I watched swirling, oily patterns emanate from the eggs. That’s it. I was just a person eating.

When I finished my meal, I wanted to grab the phone. At transitions, especially, the phone begs for attention. But I stared at the coffee pots again. This time, I noticed that one of them held the glow of the errant Christmas lights on the floor.

I know I sound ridiculous. It was just thirty minutes. On the other hand, I sense I’m not the only one who would find this situation unnatural. I was the only solitary diner in the restaurant and the only diner not using a device. It can be hard enough to put the phone away while with company. But sitting through a whole meal with nothing in front of you? Is it really that difficult?

Don’t get me wrong. I resist legalism—blanket rules and smug declarations about social media and mobile devices. I remember a flesh-and-blood friend telling me that “Facebook has no merit whatsoever.” I disagree passionately. I’ve made connections, both personally and professionally, that I would have never made without the medium.

More importantly, I’ve been able to talk people through major bouts of depression and doubt. I’ve reached out during my own anxious times when setting up a meeting or a phone call would have felt impossible.

But I have also formed a de facto rule that I cannot be in solitude for more than a few minutes without a distraction or “purpose.” My attempts at solitude have involved books or prayers and very little sitting. But instead of always reaching for that goal of a higher state of spirituality, I can be content sitting like the human lump I am in an IHOP in Lafayette with no other goal but to eat a meal and be.

The copper coffee pots were nice to look at. Yes, that is enough.

The above image is by Chris Baranski, used with permission under a Creative Commons license.