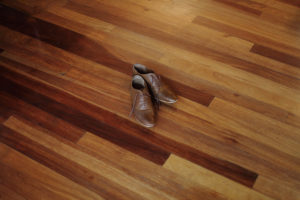 My father held the wall to work his way from the bed to the couch, avoiding the ship’s bell protruding from the wall. He was sick—the kind of sick that meant out of work too. It was his adrenal system, or his pineal gland, or a hormonal imbalance, depending on the doctor. And it was definitely sleep apnea and diabetes on top of whatever else.

During his illness, when I was in high school, he would play a twisted game with me. I might be sitting in our leather recliner, the ugly but fought-over mark of middle-class luxury in our house. He’d slap me lightly on the cheek to try to get a reaction. No reaction. Another slap, building, a bit harder each time.

It was perhaps less a game than the action of a bored younger sibling, a role he frequently played. There was no question of serious violence; I dominated him in strength, height, and health by this point. Every couple of slaps he would ask if he should stop. My goal was to never say yes. I might move slightly with some slaps, but I would win. The question was whether my frustration or discomfort would make me stop him before his worry about hitting me too hard would stop him.

The question mattered. Those first days of a serious illness bring guests, sympathy, and food. Casseroles and cookies stack up in the refrigerator and on the counter. Anonymous friends sent money in the mail when my father had been out of work for a few months.

At first, it is a tragedy or bad luck; it happens to you—you suffer, with the passive sense of receiving it. The illness is something to endure, and the sufferer garners praise when endured cheerfully. Soon, though, the sickness is an endurance test for those around you.

When the illness lasted the visits changed. Tall men with pale skin from the overcast Portland skies visited from our Baptist church, but less frequently, without casseroles, and with new purpose.

Ostensibly, the goal was healing. They asked, “What is the sin in your life? There must be something you aren’t repenting.” Sickness as God’s favorite punishment for sin, or at least a way to renew a soul. In this case, my father’s soul.

Hard times that last are no longer passive suffering. They are active, a lifestyle choice, never mind the adrenal system that won’t turn on or off properly, or the little tumor that may or may not be pressing on your pineal gland—the scans aren’t conclusive.

In our living room, with my father sinking back into the couch and the tall men from the church sipping cups of tea my mother hustled into the living room, the meeting began. We heard about Ananias and Sapphira withholding money from the early Christian church. It wasn’t so much that they lied to their fellow believers, but that they tried to deceive God. The disciples had to drag them out by their heels.

What was my father hiding? Why would he lie to them as church leaders, and more importantly, to God? And always, what’s the sin in your life you aren’t confessing? To put it in terms these men would deny if challenged: “Your illness is causing us discomfort: guilt for not taking more care of you, fear for ourselves, and sadness because we do care. The discomfort requires action, so what’s the cause and cure of the illness? It’s you and your sin, and if you won’t repent, we no longer have to feel so bad about it.”

Soon enough, my father’s denial that there was some sin became the problem. He’s too proud, said the reasoning. Pride and lying piled onto the unknown sin, until that first cause of the illness wasn’t necessary anymore.

The American prosperity gospel would say that if you trust God and obey him, you’ll be blessed in material ways. Good people get rich. Our church utterly rejected any connection to this idea, yet although riches weren’t a sign of God’s favor, illness or poverty could signify God’s displeasure. It’s the tough times gospel, but not one for aiding the suffering.

With the tough times gospel, sin can cause God to punish you, giving you control over God. Of course, God could choose to show mercy, but diabetes can be a useful form of discipline. Christians are often seen as inconsistent when they don’t want government programs to pay for the poor or out of work, but the logic fits. The notion that the poor are to blame resonates with the tough times gospel and with the prosperity gospel.

Those tall men didn’t return, but the smell of the urine bucket in the corner of my father’s bedroom remained.

The question is precisely one of endurance, not the compassion fatigue that Susan Sontag explores in her work on images of suffering. Compassion fatigue involves looking at suffering enough that it wears out the ability to empathize with another; my father’s lack of feeling in his feet remained a fact, but quit affecting me emotionally.

Endurance is different. Of course you wear out of compassion—seeing the same pain repeatedly with no sense of being able to fix it. Endurance is continuing to act and to work and to look after the compassion is gone, whether for my father, for refugees, or for the mentally ill person who will never be cured.

Fifteen years later, my father had phone calls from my brother and me, my mother taking care of him, and his parents dropping by, but virtually no one else. No other cheeks to slap, literally or metaphorically.

Perhaps turning the other cheek is the wrong biblical image to play with here. Endurance is more obvious in the directive to go a second mile after being forced to walk the first. My father even ran the mile in high school. He understood that endurance can be both chosen and required, like a Lenten fast that must continue all year.

After Easter, I look to the example of the women who came to Jesus’s tomb, knowing him to be dead, ready to prepare the body, showing the endurance that continues to take action until breath and hope return.

Matt Newcomb is an English professor and writing program director at SUNY New Paltz. He lives with his family in the Hudson Valley, where he writes about faith, sports, and rhetoric.

Above image by Apetitu, used with permission under a Creative Commons License.