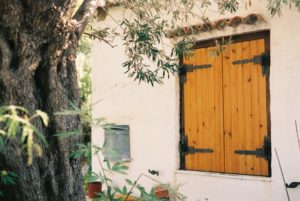 The prose poem is a challenging genre. After all, what distinguishes “plain prose” from “prose poetry”? Here, in Judith Ortiz Cofer’s “The Aging Maria,” I’d say it’s, first, the liberty with sentence structure. Take the opening sentence: in a prose work we’d say it’s too long, stretches in too many directions. But here, each phrase moves us further into the image and context of this garden statue of Mary: she forbears the elements, the tropical hurricanes; she has held her place through generations; her “calm blue gaze cut[s] through time”; she stares at the avocado tree. Also, there’s the hint of an iambic beat in most of these opening phrases. Second, what feels poetic is the changes rung throughout the poem on the statue’s aging, the vivid imagery of its disintegration over time. Finally, the movement back and forth between mere statue and Mary the “Queen of Heaven” feels poetic: reality and saint seamlessly interchanging places. The saint wins out at the poem’s very end, where—in the twilight—“the yellow patina of age briefly turn[s] to a luminous gold, as though she were lit, as she is, from within.” Listen, too, to all the luscious alliteration of “l”s in this final sentence, and you’ll know you’re hearing poetry.

She stands in my mother’s front lawn, forbearing the elements, the yearly tropical depressions and occasional hurricanes, calm blue gaze cutting through time just as she had in my grandmother’s jardín, where she stared perpetually at the avocado tree. Santa María, sole witness to the mature fruit’s mysterious plunging off the branches in the night, explosions on the zinc roof of my first bedroom, the abrupt starts of my awakenings on the island. The paint on her plaster face is now cracked so that she seems wiser, somehow marked by lines of pain and laughter. Her blue and white gown is worn through to the raw material of her making, as if she had been neglected by busy offspring in her waning years, living on a fixed income, no daughters checking in on her from time to time, no new robes or sandals on Mother’s Day. Now in direct contact with the ground, her naked feet have yellowed. The cloud she once stood on is half buried in the fertilized soil where my mother grows her high-maintenance roses. The Queen of Heaven is aging on a Caribbean island, sustained only by the collective memory of her one year of living dangerously, and the still popular assumption that glory clings to her presence. Her new smile may be the irony created by loss, the real revelation: she is beyond repair. Yet year after year a tiny crèche is placed before her in December, as if her arms could still hold a child, although it is plain to see that her fragile fingers are chipped at the tips and broken at the joints. In fact, all that is unsustained by cast or mold has begun to fall away. Still, year after year, she stands firm in my mother’s garden. In crepuscular light, her still regal form acquires a certain luster, the yellow patina of age briefly turning to a luminous gold, as though she were lit, as she is, from within.

Above image by Ellen Munro, used with permission under a Creative Commons License.