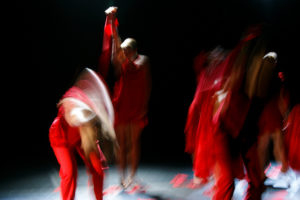 Jasmine Temple, laboratory technician at New York University Lagone Medical Center, Institute for Systems Genetics, won this year’s agar art contest for her creation “Sunset at the End.” The contest, held every year by the American Society for Microbiology, features images of landscapes, portraits, and conceptual art made by the arrangement of microorganisms grown on agar plates.

Temple’s image was unique not only because it was beautiful, but also because it showed the potential of transkingdom interactions—the exchange of genetic material between taxonomic kingdoms. Temple and her team made the image by engineering the yeast with plasmids that code for pigments normally made by bacteria, fungi, and some sea life forms. As the yeast colonies grew, colors and patterns emerged until a sailboat, Montauk oceanfront, and a red sky at night emerged.

We are never truly ourselves, and this fact has the potential for great healing.

Transkingdom interactions occur frequently in the gut and in the soil. Our identity as many different organisms sharing code and forming what appears to be a composite whole may lead us to new medicines and modes to honor all the ways we belong to and are formed by each other.

How do you make all thirty-seven trillion of your cells seen? my dance instructor Matthew asks.

I open my eyes in the ninety-degree rehearsal room. I look at the other dancers, and they look at me. We are making a dance about where we come from and the land that lives in our bodies and memories.

The innocence of dance is that it is lost the moment after it occurs. Dance is a haunting that you give yourself; performance an accumulation of ghosts. What does the audience see? Why do we need people to see us in order to express what our homes and our bodies mean and want?

In performance, I come face to face with my own wanting. In the cloak of performance, I can express what has been closed off to me. When I perform, I’m seen, but not altogether real.

Is an action born of pain, of not wanting to die because of who you are, less real or less authentic because it’s a performance? Some of the realest and most emotionally authentic things I’ve seen have been performed.

Performance is often defined as an action done for entertainment or as a means of representing oneself, and it’s the latter that makes people suspicious. As if we have loads of options for communicating the things we’ll never understand—the death of a man who can’t come back, fear that lives as an ongoing drip down the spine, pain that can’t be spoken because there’s no space made in the air for it.

The microbiology contest places agar, normally used for growing cultures and diagnosing the cause of infections, in the role of performer. By allowing transkingdom interactions to paint something beautiful, we learn about the many different ways code and meaning can be expressed and how often expression results from exchanges that call who we are into question.

I struggle with the performance of religion, of science, of writing about both. Everything I’m writing now is somehow false; sometimes I fear that writing makes me more persona than person. I feel that I am engaged in the pursuit of being continually wrong, continually lost, continually misrepresenting myself.

What is performed in the between-places, where pieces of selves are lost and exchanged and transformed?

Our history as a species made of many other species, many of them once parasites, is carried along with us. Much of our evolution was spurred by transposons, or bits of rogue genetic material that inserts itself into code.

Many transposons are now simply corpses we’ve been dragging around for millennia, though two spurred the development of embryonic stem cells and further cell specialization. Only one transposon is still mobile, accounting for 18% of our genetic code (so far) as it hops around, though there is another that will occasionally hitch rides on it.

If we learned all the languages our throats or skins could perform, would we ever be able to fully express that we love someone or that we’re scared or that we have an unnamable self under all the names given to us? Or would we keep looking for new ways to pass on the same inexpressible messages?

Take care of each other, Matthew says in our last rehearsal. Touch each other like little cats making biscuits.

Our bodies are tools and channels for performing this dance we’ll do about our homelands. Our bodies are also puffed bundt cakes in areas filled with lymph from our injured muscles, bridges to an audience who will receive and give back the story of our performance, microscopic codes and graveyards for all the selves we might become and might never be, and cat biscuits.

I wonder occasionally what the audience saw and received from our performance that night, what they returned to us. The only things I’ll remember are the sprung floor under my soles, the arrangement of light glancing off our skin as we moved, how I was once part of a many-limbed bird.

Above image by Ed Schipul, used with permission under a Creative Commons License.