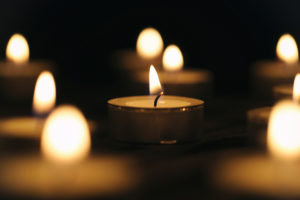 It was nonviolence that initially brought me to my spiritual director, Fr. Bill Shannon.

I was a new Christian, baptized into the Catholic Church at Easter in 1983. The very next month, the U.S. Catholic Bishops Conference issued a pastoral letter called The Challenge of Peace. The context of the letter was the Cold War’s nuclear arms race.

What struck me most powerfully was Section 4, “The Value of Non-violence.” The section is an overview of nonviolence in Christian history. Revelatory for me was this sentence: “We believe work to develop non-violent means of fending off aggression and resolving conflict best reflects the call of Jesus both to love and to justice.”

I knew next to nothing about nonviolence at the time. But I earnestly began to study it, eager to follow the call of Jesus as my new bishops had articulated it.

I’d heard that Fr. William Shannon had recently retired from teaching theology at a local college and was beginning to write about Thomas Merton and nonviolence. Oh, I thought, maybe our common interest in nonviolence could help us. A new friend of mine from my parish had been president of the college where Fr. Shannon had taught. I nervously asked her if she’d call him and ask if I could go to him for spiritual direction.

By then it was 1985. At one of our earliest meetings, Bill (as he was soon inviting me to call him) recounted his astonishing personal experience of nonviolence.

“Remember the terrible terrorist attack in Beirut, when two hundred fifty U.S. Marines were killed? I remember the day exactly: October 23, 1983. That very day, as soon as I learned of the attack, my instantaneous thought was ‘I’m going to stop smoking.’”

I must have look wide-eyed and puzzled by the connection, because he explained:

Awestruck, I sat on the edge of my chair and asked: “But withdrawal symptoms?”

“Amazing…” was all I could sputter out.

“I’m sure,” Bill went on, “that what subconsciously prepared me for this experience, for this response to violence, was all the reading of Thomas Merton’s I’d been doing on nonviolence. For Merton, nonviolence is a spiritual orientation; it’s not just a political strategy.”

It wasn’t long before Bill and I attended a workshop led by Hildegard Goss-Mayr, a leader in the International Fellowship of Reconciliation. She had just returned, with her husband Jean Goss, from training the Filipino bishops and people for their nonviolent revolution against President Marcos in 1986.

During the 1990s, when the Cold War had ended and peace seemed to be breaking out all over, Bill and I didn’t talk as much about nonviolence.

With the country crazed for violent revenge, Bill sent around an email urging the U.S. to drop bread instead of bombs on Afghanistan.

At our monthly meetings, we began touching regularly on our anti-war activities. When we met in September 2002, I mentioned the difficulty of praying in stillness during those days—especially with the daily heap of always-urgent emails (call Congress today!).

Bill said: “All you can do is live in the now. Be present to God in the present moment. Do what you can in the present, and be done with it—always in joy, trusting that God is love.”

When I complained that the problem with email is that there’s too much in the now, he smiled and said: “Overdoing is a form of violence to yourself. Stop when you need to; tend to other things in your life.”

All of which I “knew.” But I needed to hear it from him.

Two months later, I was again telling Bill about the flurry of anti-war activities that I was engaged in.

In response, he didn’t comment on the activities. Instead, he took a larger view.

“Hope,” he said, “is the virtue we need to hold onto in this dark time. We pray in the dark, but we mustn’t get discouraged.”

He smiled and said “Asking that question is what God wants.”

I do join the rallies. As for the political emails, I deal with a few each day, then stop, remembering Bill’s caution that “Overdoing is a form of violence to yourself.”

During this scary bleak time, I try to hold in mind Bill’s hope in hope itself and his words:

“Hope is the virtue we need to hold onto in this dark time. We pray in the dark, but we mustn’t get discouraged.”

Above image by Markus Grossalber, used with permission under a Creative Commons License.