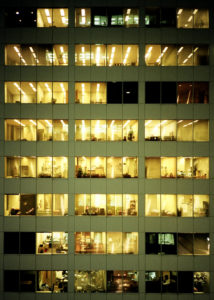 This post originally appeared in Good Letters on October 20, 2011

In the last few years, my school has made a huge push towards what our Global Studies’ Director refers to as “glocalism.”

In essence, glocalism encapsulates the idea that we are all of us citizens of various communities, both local and global, and that being glocal citizens entails envisioning ourselves as active members of both a local neighborhood community, as well as a world community. He often uses the image of concentric circles to illustrate this, and I think they serve as apt exemplars of the concept.

I am a member of my immediate family, my extended family, my school community, my physical neighborhood, my city, my county, my state, my country, my continent, etc.

As technology and transportation become more broadly accessible and make it increasingly easier to connect with people across the globe, the distance between us grows daily more miniscule. And yet, so often, the fact that we can watch televisual events unfolding all over the globe does not necessarily translate into lives lived as better neighbors, whether locally or globally.

So our push towards knowledge of our roles as neighbors is not limited merely to acknowledging the fairly obvious fact of our innate connectedness, but recognizing that this connectedness carries with it certain demands upon us. We are neighbors, whether we would have it so or not. The only question is whether we will be good or bad ones.

I’ve been pondering what I want to say for two months now, tossing ideas around and around. In the middle of the night, it finally occurred to me that being a global neighbor means that we get to experience both the enormous comfort and the equally enormous responsibility of knowing we are not alone.

I’ve always loved the line in Shadowlands, “We read to know we are not alone.”

When we read, we encounter people throughout the millennia who have despaired as we have, loved as we have, feared as we have, dreamed as we have, and so on. The same holds true for travel, I believe, if we are attentive and humble and receptive. We travel. We get to know people, who despite their enormous cultural and personal differences know despair and joy and hunger and desire and loneliness. We are not alone. We are comforted. We are not too much or too little. We are like all the others, behind and before.

But it’s not only comforting to know we are not alone. The knowledge that we are not alone places upon us certain expectations, and we do not have the option of pretending that our choices have no consequences.

I heard Bill McKibben speak at an Energy Fair several years ago, and I was struck by this fact. The United States comprises roughly four percent of the total global population. However, we account for over twenty five percent of the world’s energy consumption, particularly of non-renewable resources such as fossil fuels like oil and coal. Bangladesh, by contrast, has a population that is approximately half of that of the United States, but their energy consumption is so minuscule that it doesn’t even register above one percent on the global scale.

There are clear factors that affect these numbers—development, economics, education, lack of technology. However, the fact remains that a country that accounts for so little energy output is now receiving the full brunt of climate change, as their waters warm and rise.

In an article entitled “The Submerging World” in Orion, McKibben writes:

“Marine scientists have warned that this most benign and teeming of all ecosystems [coral reefs on the shores of Bangladesh] may not make it to mid-century. Already, widespread bleaching from higher temperatures has sterilized many reefs…. And when the reefs die off and disintegrate, islands like Tuvalu’s, with nothing to break the surf, are opened to increased wave action, which merely compounds the problem of rising seas…. Mosquitoes carrying dengue fever are already spreading into places that have never known mosquitoes before—parts of Bangladesh, for one—bringing sudden hemorrhagic death.”

To imagine myself as a neighbor to Bangladesh, I have to try less hard than many Americans. One of my favorite students of the last four years hails from Bangladesh, and the chair of our English department has a son who works for the Foreign Service in Dhaka. A carved elephant sits on my desk that was brought back to me as a present from Bangladesh last year. I have merely to glance up from where I am sitting to know that somehow I am connected to that country so many thousands of miles away.

So what does that mean?

It means that every time I drive my car when I could bike or walk, every time I lower my AC or raise my heat when I don’t absolutely have to, every time I wantonly dispose of trash that could be composted or recycled or choose not to consider alternative methods that avoid rubbish altogether, I am making a choice that affects Bangladesh.

At the very least, every time I find myself indulging in the illusory notion of my inviolable solitude and pretending that my actions have no consequences for other people, I am now reminded of the family I know from Bangladesh. Suddenly, climate change is no longer abstract and theoretical. It possesses a familiar face and name.

That’s what it means to me to be a global neighbor—to know you are not alone, for better, for worse, for richer, for poorer. We will continue to affect those halfway across the globe, whether we own this fact or not. The only question that remains is whether we will choose to affect them for good or for ill.

Above image by spDuchamp, used with permission under a Creative Commons license.