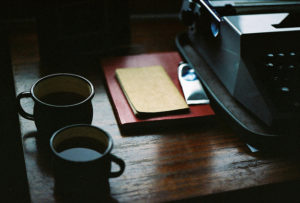 I was standing in the kitchen of a rental house in the middle of forty acres of woods deep in the Willamette Valley of Oregon, when I told my agent I wanted to write about the death penalty, a topic that had chased me for over a decade. I’d only recently sold my first young adult novel, so I came at him hesitantly and with a caution I rarely trot out when discussing my own work.

I process ideas out loud and with a boldness that, at times, embarrasses me in retrospect. But even with my own preternatural confidence, I wasn’t blind to the hurdles an editor would need to clear to get on board with a book—for teens!—that featured a character on death row. He was more than interested, which was a good thing because the roots were already reaching out and taking hold.

This was six years ago.

It took three years to write the first words.

I was sitting at a desk next to a bank of floor to ceiling mirrors in the office of what was a new job. I didn’t know then—despite the rest of my coworkers jumping ship an hour earlier—that nobody waited for the five o’clock whistle. So after exhausting all attempts at doing work, I resigned myself to thirty minutes of writing, rationalizing it as a one-time thing. A gap filler.

Sitting in the sun, I wrote this sentence:

Luke and Toby didn’t know a thing about planes, hadn’t even set foot in one before they found that rusted-out crop duster halfway between Highway 10 and a little gas station that marked the end of incorporation and the beginning of what people simply referred to as county.

For the next two years, I barely wrote another word of what had colloquially become “the death penalty book.” Other writers—friends—would ask if I’d finished, which itself eventually became a sort of joke. I’d shake my head and sigh, the frustration very real in my voice as I said, “Still working.” Or: “It’s coming along.” But the truth was: I couldn’t find the words. Or more importantly: I didn’t trust myself to write them.

And it froze me faster and harder than a Minnesota winter.

(I realize this is possibly the most insufferable thing for a writer—especially one who hasn’t exactly had world-altering success, critically or commercially—to put out into the world. To be like, I’m afraid of messing up the idea of a lifetime. But I felt an obligation to the story, to the reader.)

I was a press witness to an execution. I saw a man put to death. They told me it was my job and I did it without a single objection, an act of cowardice that still haunts me.

For the fifteen years since, I’ve searched for some way to express the shame and injustice of that experience. That pursuit took me to seminary. It pushed me to read every book I could find about capital punishment and mass incarceration. I attended vigils and public forums. I taught classes at prisons and juvenile correctional facilities.

And I ultimately befriended death row inmates (that’s the real work) and wrote letters until my hand cramped. All of it to make sense of/run away from/finally process what happened in that tiny, triangular room.

I write young adult fiction. It hasn’t always been a comfortable relationship. Most of the tension comes from my own literary peccadillos. I was a serious writer, you see, inevitably seconds away from producing significant literary tomes. I’d probably become a compulsive bandana wearer, too.

You see where this is going.

The truth was, I enjoyed writing about teenagers. Real teenagers who were embarrassed about secondhand clothing and confused about whether they were ready to have sex and, above all, trying to figure out what it means to grow up.

As a youth pastor, this was territory I knew.

The switch flipped when I realized that publishing books for teenagers wasn’t a cheat. And when I (ahem) actually read some young adult novels, I discovered an industry dedicated to telling stories that not only represented the teenage experience, but pushed them to think about deeper philosophical and theological questions.

There are few topics where I’m unwilling to hear the other side. Capitol punishment tops the list.

It is brokenness incarnate, our fears and anger and limited imagination becoming flesh. Becoming needles and sedatives and grown men strapped to a gurney, screaming out last words behind soundproof glass.

Most adults I know support the death penalty, trotting out thoughtless arguments like: Some things are unforgiveable. An eye for an eye. They don’t deserve to live.

Most of them are Christians.

They’ve lost their imaginations, their vision for the world as it could be. To quote Walter Brueggemann’s The Prophetic Imagination, they’ve forgotten that “hope is subversive, for it limits the grandiose pretension of the present, daring to announce that the present to which we have all made commitments is now called into question.”

I want to believe that in the most desperate way.

I once heard a Famous Youth Pastor say his job was to break kids’ hearts by confronting them with the injustice in the world. Because once they’d seen it, they won’t be able to forget it. Their heart would stay broken to the stuff that breaks God’s heart.

Young adult fiction does this same work. It introduces teenagers to the injustice of governments leveraging food against bloody entertainment. It reminds them that loyalty and friendship can defeat overwhelming evil. It engages the God-given sense of love, justice, and peace that is inside all of us.

There’s a reason Christ calls children to him. They are still in process, called, not because of their standing, but instead because of their vision. And ultimately, that makes them very, very dangerous to the status quo.

When people ask me why I’m writing a death penalty book for teenagers, I joke.

But the truth is: I’m no longer confident that we can leave this conversation to the adults. A death penalty book written for that audience must first ricochet again and again against a heart that has been hardened by a world that rewards practicality and safe, middle-of-the-road theology. And if it miraculously does penetrate a lifetime of ideology and dogma, what soil does it find?

My own heart is rocky, at best.

So why am I writing a book like this for teenagers?

Because when confronted with the main theme of the novel—is anyone beyond redemption?—their hearts won’t let them answer with anything but a resounding, no.

Above image by Barbara W, used with permission under a Creative Commons license.