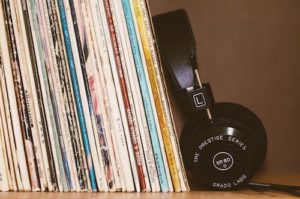 First, a note: I think this might be the last time I do this. If you’ve followed my writing about music for the last twenty years (in which case you are my mother, so thanks) you’ve heard me say things like this off and on for at least the last ten, so I don’t mean to be overdramatic.

Music continues to be an enormous force in my life (apparently I listened to over 700 hours of it on Spotify alone this year, according to a creepy algorithm that also correctly guessed my age and told me I’m basically stuck in 2003 in terms of my musical tastes), but this is my tenth year writing a year-end music list for “Good Letters,” and as I try to expand its focus to listening in a broad sense, I think I’m going to call it a day and try something different next year.

Plus, I’ve been in the habit of calling the list “XX Songs for 20XX,” and I’m not sure I can come up with eighteen songs next year.

So here are seventeen songs, albums, radio shows, podcasts, and other things I listened to that stuck with me in 2017. No theme, this time. Just me listening to my life. Feel free to listen along. And get in touch with me, or anybody really, so we can listen to yours, too.