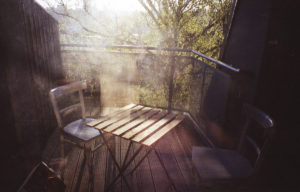 Near the end of 2017, I rewatched Oliver Assayas’s ghost story film Personal Shopper not long after my wife asked if I had any New Year’s resolutions. It occurred to me that Personal Shopper may be an interesting film to frame the answer to that question. For all its apparent ambiguity, Personal Shopper seems clear about at least one thing: We are all mediums.

Kristen Stewart plays Maureen, a personal shopper in Paris for a celebrity named Kyra. Maureen buys clothes and jewelry for her celebrity boss. Maureen is also grieving the death of her twin brother, Lewis, who died of a heart attack. Maureen shares in common with Lewis the genetic heart condition that killed him. They also share an interest in “the world beyond our world,” particularly the ability of the dead to communicate with the living.

Maureen and her brother promised that whoever died first would send the other a sign, and she’s waiting for that sign. With it, she could assure the buyers of Lewis’s house that it’s free from evil spirits. A sign could also assure Maureen that she can move on.

Maureen’s waiting forms the film’s sensibility, one by which the viewer experiences an in-between space.

Personal Shopper can come across as if there’s not much to it. It seems thin at first. Yet, this is fitting insofar as it’s inviting the viewer to observe the surrounding world as a thin place. In the world we inhabit, the world beyond is ever close. Close enough that we might miss it.

Personal Shopper is a drama that uses quietly elements of thrill and horror. The potential threats are notable: Mortality, materialism, and technology.

Mortality threatens our lives, and mediums attempt to make contact in a way that might mean death isn’t the ultimate end and mortality need not be feared. Because she shares the heart condition that killed her twin brother, Maureen’s sense of mortality is acute.

Materialism threatens with the suggestion that all of our mediating is but an illusion that means nothing. Her work as a personal shopper—as a medium for someone else’s projection of glamour—threatens to erode her soul with its shallow comforts. “I spend my days doing bullshit that doesn’t interest me,” Maureen says.

At Kyra’s apartment, Maureen talks with Kyra’s long-time illicit lover, Ingo. He believes that Kyra is about to break up with him because she doesn’t want her husband to discover that she’s cheating on him. Maureen asks if he loves Kyra. He says that love never crossed his mind—that it was “just physical.”

Technology is a medium that can be used for good and ill. Maureen receives text messages from an anonymous sender. Assayas manages to make the message exchange into one of the most thrilling cinematic moments of the year.

Is the sender Lewis? Some sinister stalker? Assayas films the exchange in such a way that awaiting the anonymous sender’s replies is like awaiting a message from the other side. But it’s also riddled with the anxiety that the message may not be good. Sometimes the “ambient awareness” that surrounds us is like a specter of everyone’s worst impulses.

Eventually, the anonymous texter encourages Maureen to try on Kyra’s clothes, a forbidden act with an allure to which she succumbs. Trying on Kyra’s clothes made it more explicit: Shopping for Kyra was a roleplaying fantasy, and that spirit of celebrity and materialistic success began to gain entry into Maureen’s life.

One of the more interesting references in Personal Shopper is to Rudolf Steiner, who believed we ignore our spiritual experience at our own peril. Owen Barfield—least known among the Inklings—was something of a devotee of Steiner. Barfield wrote that the “historical moment was that one in which the western mind had reached the lowest depths of materialism, and there were few who would listen to what [Steiner] had to say.”

Barfield thought Steiner was perhaps the key figure in “the painful transition of humanity” from what Barfield referred to as “original participation” to “final participation.” For Barfield, final participation was “the idea of a fully conscious participative unity with nature.” Standing in the way of our transition is “modern man’s inveterate habit of experiencing matter devoid of spirit, and consequently of conceiving spirit as less real, and finally as altogether unreal.”

Maureen mourns Lewis’s death because he is her twin, but even more so because Lewis “was deeply intuitive of others; he understood things that went unspoken.” His friends and family believed that he saw things others didn’t. They try to “hold on to the memory of his freedom” and “put it into practice.”

The much debated last scene seems to suggest that neither our subjective experience nor objective nature are ultimate. Instead, what matters is the participative unity between the two—a matter that is quite spiritual.

After watching Personal Shopper, I found myself reflecting on Czeslaw Milosz’s wonderful “Ars Poetica?” Milosz writes, “The purpose of poetry is to remind us / how difficult it is to remain just one person, / for our house is open, there are no keys in the doors, / and invisible guests come in and out at will.”

We are polyphonic. Contradictory voices visit us, and our urges scatter us in many directions. We are always on the verge of losing control of who we are becoming, of mediating someone or something that is unbecoming of us, often without our knowing.

“Poems should be written rarely and reluctantly, / under unbearable duress and only with the hope / that good spirits, not evil ones, choose us for their instrument,” Milosz writes.

Assayas is trying to channel the good spirits in his film. In the New Year, what do we hope to make way for? I’m trying to attend to and become a medium for those good spirits, even and especially, as the bad circle all around us.