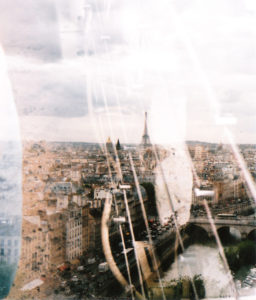 In my first church job, I rarely had to serve communion so, every month I’d get a few moments to remember what church was like before I had come on staff.

In The United Methodist Church, the way we celebrate communion is fairly standardized. I’ve heard arguments that this standardization (read: boring; unwilling to change) is indicative of problems facing the Protestant church. But the liturgy—the giving and receiving of the elements—is familiar and comforting to me. Something I mouth to myself as the pastor consecrates the elements.

Butch was retired Air Force and could talk smack with the best of them. When his son left for college, he presented the kid with a backpack full of recently changed locks. When he stood up to read scripture or help out with the announcements, you could feel the anxiety levels starting to rise inside that large sanctuary.

Simply put, Butch and I were simpatico.

That Sunday, I walked to the front of the church with the rest of the congregation, singing hymns and trying to eke out a moment of reflection before my responsibilities would inevitably take over.

When I got to the chancel, I received the bread.

The body of Christ, broken for you.

After the bread, comes the wine (grape juice in Methodism).

The blood of Christ, shed for you.

But Butch was manning the cup that day and a familiar glint passed through his eyes as he offered it to me.

The blood of Christ, shed…even for you.

I did a double take, trying to catch his eye to see if he’d meant to alter the. But he was already smiling at the next person. I stood there long enough that a family waited awkwardly for me to keep moving. When I got back to my pew, I watched Butch. But nothing seemed out of place.

As soon as the organ fired up at the end of the service, I went to find him in the fellowship hall.

“What did you mean by even you,” I said. No context. No attempt at subtlety.

Butch considered his coffee, then me.

“Exactly what I said.”

And then he walked away.

It’s a conversation that comes to mind often, most recently as my family and I were watching the second season of The Good Place. In this season, the characters—Eleanor (Kristen Bell), Chidi (William Jackson Harper), Jason (Manny Jacinto), and Tahani (Jameela Jamil)—have grown and evolved and made a case that they are now “good people.”

This growth mostly centers around philosophy, not theology, despite the characters’ attempts to navigate an afterlife, no matter how vague. As a result, the moral ethics of the show act as de facto gospel to help characters figure out what it means to be “good.” Despite the show’s intent to keep miles away from any theology (Christian or otherwise), it’s hard to separate the show’s purpose with even a casual knowledge of theology.

I admit that, at first, I wasn’t sold on the show’s premise. I’ve been duped by too many movies or television shows that hint at spirituality that goes beyond the basic, only to commit the usual unforgivable sins.

So I went into the pilot episode of The Good Place hesitantly, with the knowledge that I could use that half hour in any number of other, more productive ways.

Thankfully, the show was a surprise—to many. The characters are compelling. The story is both fresh and unexpected, without preying on cheap emotionalism or ginning up constant plot twists (I’m looking at you, This is Us) that eventually fade into white noise.

Even the moral philosophy is entertaining, causing my family to pause the show more than once and discuss the Trolley Problem, Kantian ethics, utilitarianism.

Basically, it’s everything I’ve ever wanted from a television show.

Naturally, given my particular stripe, I see theological implications in each episode. I see hints of sanctifying grace, a power that refines us throughout our lives. I see moments of shocking realization, the sort of turnaround I associate with conversion. With judgment and conviction. With repentance.

I see characters who reject a binary view of heaven and hell, who consistently and faithfully seek out a need for redemption they can’t quite understand or explain. They choose to believe that the process of becoming better never ends. So they work and they struggle and they hope.

I can already hear my Lutheran friends—among others—grumbling about earning our way into heaven. And while I’m sympathetic to this position, it’s important to remember that The Good Place isn’t meant to be constructive theology.

Instead, it is a reminder of something much more important. A truth that, perhaps, we’ve allowed to become commonplace. One that pushes our comfortable ideas of grace, love, and forgiveness into a much riskier realm. Because The Good Place is centered around people who probably don’t deserve a second chance. And yet, they get it.

But maybe more importantly, I want to remember that God also accepts the people who believe they are good. Those of us who are convinced of our right to be at the table. Who don’t act in cartoonishly bad ways, but instead choose small lies and minor indiscretions, allowing them to accumulate over the entirety of a life. Telling ourselves it’s okay.

I want to believe in a God who reminds us of our status again and again, whether through the pages of the Bible, Kant, a silly television show, or even the salty mouth of an old Air Force Colonel.

Always saying, “Yes, even you.”