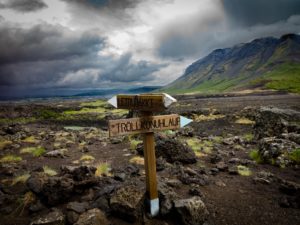 The first time I threw something in a pathetic fit of anger, my husband and I were walking a gravel road in Saskatchewan. We’d been living in a cabin. No internet, phones, etc., and this was before we were parents. Most days would unravel into a fight about something or another.  It would feel irreconcilable.

Then we’d get distracted or calm down and the issue would dissolve.

That first time, we were walking briskly, pumping our arms to burn more calories and emphasize key points, yelling about god knows what. The pumping didn’t loose our scratching inner roosters, and the yelling fell flat, as there were no neighbors in earshot, and as such, no transgression.

A few red-winged blackbirds stayed put atop reeds in the ditch. A garter snake moved off into green canola, but not because we were yelling.  At some apex of the argument, I threw my jacket at my husband. The wind took it for a moment before it crumpled on the road.

We laughed—at my escalation, at being that mad over nothing, at how embarrassing and childish it was to throw a jacket.

Fighting with my husband catapults me into senselessness like nothing else. We launch feelings, we drag out old skeletons, we bash our hamster balls of gender. We talk it out, so far as necessary, both of us tired and wanting a simple evening—a rum, a BBC re-run.

When we can’t get to a resolution, I’m a livewire. I slam the door or rip paper. It’s always unsatisfying, and frightening, to see oneself ripping paper.

I’m beginning to understand what all the semi-resolution has cost. I can see an outlined form, now, of what the anger, the senselessness, is saying.

Anger (for me) is the current of God the Mother. Almost all my life, I’ve trained to disconnect from that current; to be convinced I don’t know it or live from it. The current is wider than anger, of course. Anger is just particularly good at busting through walls, floors, cultural training.

Last night, after an unresolved fight, in which we gave up and sat beside each other on the couch like cement on fire, watching a murder mystery, I dreamed that I broke our huldufólk rock, by accident, during a fight.

We joke that the rock is our best friend. It’s palm-sized, and flat-bottomed so it doesn’t roll. It’s porous, with eerily perfect facial structure: two eye sockets, rounded apple cheeks, little nose. Strangest of all, there are unbelievably clear moss patches marking eyes, a small mouth, ears, and a small tuft of hair.

When I spotted the rock at the side of the road, we were walking in a valley at dusk. The foothills were covered in moss that was soft as foam to climb. I turned the rock over a few times, chuckled, and put it in my backpack. We continued to walk, dazed by the inhuman landscape.

The rocks, amidst the moss, kept becoming faces—an old, angular, male face here; a chubby milk-maid face there. Big faces. Small faces. Child-sized faces. At first it felt like the game of spotting figures in clouds.

But then, on my left, the form of a woman in a long dress, walking uphill, seen from behind. Carrying something. I blinked—there she was. I walked forward, to see if the image would dissolve—but there she was. I walked backwards. Closed my eyes. Still there. I hurried up to my husband and had a few sips of his beer.

Home, in Canada, I read about huldufólk, Icelandic rock spirits. I knew it sounded insane and fruit-loopy, but as I read, there was no question about what I had seen.

And there he sat, this rock face, near my frost-flowered window in the city. Wracked with guilt, I thought about mailing him back but worried someone in a mailroom would toss him in the garbage.

I thought about seeing if Jonsi, from Sigur Ros (we had concert tickets that week) would personally take the rock back. I settled on taking it back myself at some point in the future.

Whenever we’ve moved, I wrap the rock carefully and unpack him first, before kitchen necessities, pajamas, whatever. My husband and I walk through the new apartment, dead-seriously discussing locations for the rock to sit.

The bizarre animality of our feelings toward this rock. Beyond the thing. But also absolutely and necessarily connected to the thing.

This is how God the Mother always speaks. Though I’ve found she’s not that into speaking (speaking being cornered by pedantics). She’s more of a doer. Pushing buds, undoing and retying life in compost heaps, leading cows and humans through birth canals, tapering the breath of the dying.

You’ve known her, I’m sure. The feeling of snapping-to in the car, having been lost in a daydream while some other layer of yourself drives. Maybe you’ve known her in childbirth, in teeth meeting apple, in looseness of leaves in late fall.

Both my husband and I, in recent years with too much anguish to get into, have found ourselves alone at home, separately, weeping or beyond weeping, and have seen the rock face from the corner of an eye. It looks like it’s watching with a calm detachment, full of a kind of love.

At first I thought the calm the rock face extends had to do with perspective—how short his sojourn in our house is, given the life of a rock. This morning, with phrases of last night’s fight still dispersing in the air, I think it’s more about the way this rock bares spirit.

For years, anger broke and tilled the ground, with a violence that scared me. Then this huldufólk came into our home like a spiritual egg that hatched and changed everything. Now I’m accepting what’s grown and what’s faltered in the opened ground. The marriage is ending, with a sort of quiet—a similar calm detachment.

Katie Gorrie is a poet and celebrant based in Montreal and rural New Brunswick. She is the creative director of The Filid Chapbook, and she teaches at St. Stephen’s University.