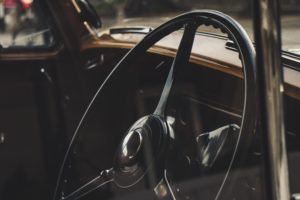 The song catches me off-guard. It is nudged between other songs on an album of ethereal harmonies. Sister Sinjin sounds either like a trio of cloistered women offering up their haunted harmonies and lyrics in the small rays of sunlight off stained glass, or they are wise women who run with the wolves, singing of earth and spirit. I suspect they are both.

But then, as a new song starts, in a clear voice one of them begins singing of caskets and death. And I start to cry.

I didn’t get to say goodbye to my father when he died in his makeshift hospice room in the house I grew up in. I’d said an awkward and truncated goodbye a few months earlier when I left his room to fly back to my home across the country.

His mother had died only months before he did and their strange, strained, codependent relationship hid something sad in the years of his childhood which both of them spoke very little about.

There was no funeral for my grandmother; my dad was sick so he and my mom drove to West Texas alone to bury her beside her first husband—my father’s father. Living many states away, I didn’t get to say goodbye to her either.

Though I spent quite a lot of time with her and loved her, I never felt a great kinship to my father’s mother.

Petite and elegant, she did not pass down her genetics to me. I inherited my paternal grandfather’s big-boned, West Texas tenant-farmer stock. My body would forever be a disappointment to my father, who encouraged my intellect and artistic pursuits but was always telling me to put the fork down.

The candy dishes littered around my grandmother’s house were at cross-purposes with my parent’s goals, and I felt equally guilty and elated as I went from crystal dish to crystal dish, eating my way through a bag of Hershey’s kisses.

I always came back from a week in the summer at my grandmother’s house just a little bit fatter.

I loved the warm hospitality of the house my grandparents built together: the magical spider plant lamp that turned on or off with a tap of a leaf, the plastic Dutch boy and girl who stood in a permanent magnetic kiss even when you tried to pull them apart, the mottled marble floors that were the perfect texture for sliding on sock feet, and my father’s childhood room that was preserved in time.

My grandfather died of a heart attack in the 1960s when my father was only fourteen. Though long dead, he still inhabited the house when I was growing up, his office held him in its file cabinets, art-deco furniture, and black rolling office chair.

His beat-up car sat in one spot of the four-car garage all the years I visited, the rat poop visible through the dusty windshield when we tried to peer inside, wondering how much that car would be worth if it had been cared for.

I’m not sure how my grandmother’s second husband (the grandfather I grew up with) felt about living in a museum all those years. Maybe he understood, after losing his own first wife to cancer, how my grandmother’s home had become a shrine to both her first husband and their only child.

Death lived in every corner of that house—until my grandmother finally let it go to move closer to family—but we came to feel nostalgic about it.

Maybe death became nostalgic for my father. Every time he left for a business trip his clipped “love you” to his daughters was usually followed by “Lord willing, and if I live, I’ll see you in a few weeks.”

The Lord didn’t will him to live forever. And I never got to say goodbye. It’s probably how he wanted it: The call history on his phone indicated that he called a person or two on the day he died. I wasn’t one of them.

“How long must we live In the midst of death?”

My grief speaks for me sometimes. That’s what living in the midst of death is: we have to sway back and forth as this wily wind takes us where it wills—anger, laughter, sadness, numbness.

Today I feel hurt and a little angry. But tomorrow, I will remember my father’s kiss, his scratchy beard, his broad chest warm and safe, and I will miss him terribly.

I will cry again for that lost goodbye.