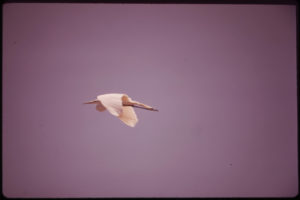 Todd Davis’s poetic imagination is steeped in the natural world. “First Kiss” demonstrates this as much as any poem possibly could. The poem describes a childhood courtship, every action of which either involves elements of nature or is seen in terms of them. This begins with the poem’s very first words: the girl sounds like an egret and gives off the smell of the rabbit tobacco plant. Then the boy snares rat snakes, even letting himself be entwined in them. In church, the girl “croaks” (like a frog or crow) about blackbirds. When she finally kisses him, it’s “under the bent-down / branches of a hedge apple” and her kiss is a “peck” — “like a flicker grubbing a snag.” Reading this poem, letting myself be absorbed into it, I feel immersed in the natural world — even more so than if I were taking a walk in the woods. The poem dramatizes, delightfully and — dare I say it? — completely naturally, how our human life cannot be conceived apart from the fullness of creation.

She spoke with the voice of an egret, skin swirled
with the smell of rabbit tobacco. He hid in honeysuckle
to watch her catch dragonflies, blue-green matchsticks
with wings glistening like wax paper. Mamaw called them
snake doctors, claimed they’d follow all manner of slithering,
stitch them back together when they were riven by a shovel
or hoe. The boy snared rat snakes, allowed them to slip
around his wrist and elbow, circle his waist. When the girl passed
on the path between fields, or walking to town along the wagon road,
he thought of wind unsettling muslin, the first hint of darkness
on the threshing floor. She bent to his ear in church, croaked
about the feathers of red-winged blackbirds, how they resembled
the leather covers of a Bible, their whistle-song like the secrets
inked on onionskin paper. The morning she took his hand
on the way to the schoolhouse, pulled him under the bent-down
branches of a hedge apple and kissed him, pecking at his lips
like a flicker grubbing a snag, he remembered the preacher
pushing his head backward in the tank of water, hollering
to the congregation that he was saved.