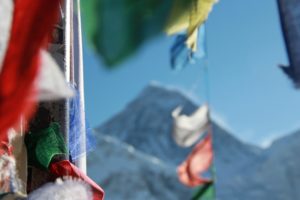 One night after rifling through my tilting mountain of bedside books and coming up short, I sifted through my husband’s stash. I pilfered The Ghosts of K2, the library book he’d been reading about the first decades of expeditions to climb the second highest mountain in the world.

While I attempted K2, my husband moved on to Jon Krakauer’s Into Thin Air, another mountain climbing book about Everest. My husband spent some of his younger years guiding groups or climbing mountains alone. Sometimes I think that his recent book stash is a wistful nod to those adventure days.

During our eight years in intentional community on a farm, he rarely cracked open an adventure book. Farming, with its risk and unpredictability, was adventure enough. But now that he is in an only slightly more secure occupation (pastoring), the wistfulness returns now and again.

Mountain-climbing narratives are not my usual reading fare. It’s not that I’ve never climbed a mountain. In high school, I went on one of those Christian youth group treks up a mountain in Colorado where guides—not much older than we were—tried to hammer in lessons about discipline, delayed gratification, and teamwork. One day after a break for lunch, they made us pack up our stuff and put back on all of our heavy gear before telling us, “Surprise! Just kidding…we’re at base camp!”

It was meant to teach us something or other about trusting them or not complaining. But I was pretty annoyed and I’m not sure I learned much beyond the fact that I lose my vision in high altitudes (true story).

But these annoyances are nothing compared to what was suffered by the climbers of K2: the frostbite, unfathomable wind speeds, nights bivouacking in deadly temperatures, or the potentially lethal disorientation of elevations comparable to the cruising altitudes of passenger planes.

Of course, it’s difficult not to blame the climbers themselves. Early exploration was a deadly preoccupation: What did they think would happen?

The early climbers of K2 were an interesting bunch. One of the first attempts was by the famous occultist Aleister Crowley who, at some point in his life, was banished from Italy because he was too depraved even for Mussolini. Later attempts came from an Italian royal named Duke Abruzzi and then a group of Ivy League boys, backed by an Alpine climbing club.

What did these explorers have in common? Wealth, education, privilege, and perhaps a large dose of insanity? They also possessed the not morally neutral knowledge of how to utilize the gifts of the local people: the sheer number of local Pakistani porters (sometimes 200) who were hired to help carry food, supplies, and the multiple tons of equipment for these expeditions is shocking. The expertise and altitude acclimatization of Sherpas, members of a Himalayan people who are well-known for their skill in mountaineering, made many (if not all) of these climbs possible.

As I read the history of the expeditions to K2 it seemed to be another story of something conquered by Western men who have been given the lion’s share of the glory.

As we prepare to celebrate Thanksgiving, it should be even clearer to us that our infrastructures and ideals have been built up by people who went to violent extremes to conquer a place. The Mashpee Wampanoag tribe, who traces roots back to the tribe who aided the pilgrims, has recently been forced to protest to keep from losing their reservation and governance. Conquering seems to be a perpetual sin that continues to disenfranchise its survivors.

I don’t mean to say that conquering a mountain is exactly the same as conquering and displacing Indigenous peoples but the way many have taken summits—without regard to the local culture or the health of the landscape—has lead to disastrous results for the land and the people.

My husband is reflective about his own adventure-seeking as he reads these mountaineering memoirs and recalls some of his mountain treks. Marriage and fatherhood have certainly tempered his itchy feet, but I think it’s more than that.

I think he recognized that extreme mountain climbing only perpetuates the desire to do more of it. The Ghosts of K2 by Mike Conefrey emphasizes repeatedly that these obsessions with K2 never brought happiness its climbers. In fact, one of the Ivy League boys Charlie Houston, who unsuccessfully attempted K2 twice, was so distraught when he heard that someone else had finally reached the summit that he lost his memory for a few days and had no idea where he was.

He literally lost his mind.

When Jon Krakauer wrote Into Thin Air, his memoir of a tragic trek to Everest, he talked about the foolishness of a climbing obsession that eventually led him to Everest.

But though his urge to conquer might’ve had consequences, Krakauer’s retelling became an offering, a gift of healing, a corrective in the face of the tragedy. Maybe creation is the antidote to conquering. Conquering is all stomping boots, grasping, hacking, and splitting. Creating is open hands, humble offerings, molding, shaping, and blooming.

The climbers of K2 and Everest who lived to write their tales describe the awe of the first site of these mountains. From a distance away, long before they have set foot on the mountain, the awe is solid and thick. But once they have reached the top, the air is too thin to breathe, to think, or to even appreciate the momentous accomplishment of reaching the summit.
I wonder if the un-inhabitability of these mountaintops could be God’s way of telling us that sometimes staying low is better for those of us who have the urge to conquer.

Below the mountain is where there is enough air for life to bloom. That is where our minds are clear enough to feel awe. That is where we can sit back on our heels and remember our smallness in the face of a Creator and we can wonder how to offer that life as a gift to the world.