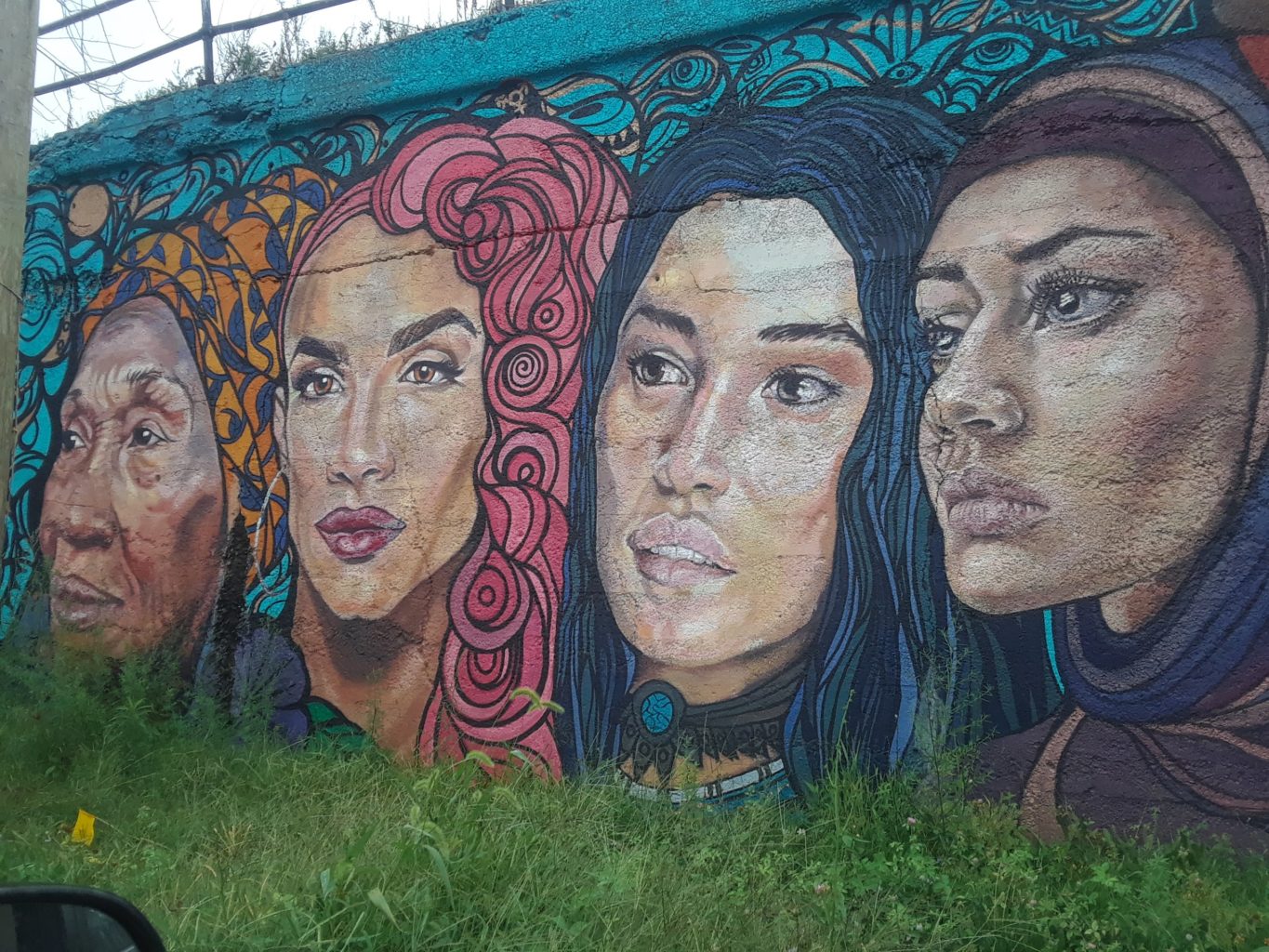 Mural by Sam Kirk and Sandra Antongiorgi (2016) in Pilsen, home of the National Museum of Mexican Art in Chicago, courtesy of the author

On August 3, I was on a bus between Guanajuato and Mexico City, traveling with my family, when a 21-year-old American man opened fire in a Wal-Mart in El Paso, Texas, killing twenty-two people and injuring twenty-four. According to the Associated Press, he had published a screed online that referred to a “Hispanic invasion of Texas.” ​The governor of Texas, Greg Abbott, had previously sent out campaign literature which encouraged people to “defend” Texas and “take matters into our own hands.”

​In Mexico, the massacre dominated the news for days. The next Tuesday, as I rode to the National University in Mexico City with my friend, we listened to the radio as journalists pointed out the facts, which included Trump’s “criminals, drug dealers, rapists” invective against Mexican immigrants, the prevalence of guns in the United States, and America’s fraught relationship with the second amendment of our Constitution. (They didn’t mention, though it was pertinent, that El Paso has a Spanish name because much of the United States used to be Mexico, and that Mexican territory now called Texas was “claimed” by the United States in 1845, a move that was not recognized by the Mexican Government.)

I recalled those days after the shooting when I visited this year’s Día de los Muertos exhibit at the National Museum of Mexican Art in Chicago, which is dedicated to “those who tragically lost their lives in El Paso, Texas, where Mexicans and immigrants were targeted in the August 3rd hate crime.”

Día de los Muertos is a syncretic tradition; like many things in Mexico, it’s a combination of Spanish Catholicism and pre-Columbian ritual. It’s celebrated different ways in different places, but generally, on October 31, it is believed the souls of people who died as children come to visit, staying through November 1, and on November 2, the souls of the adult dead visit.

The All Saints and All Souls remembrance, the museum notes, dates back to the tenth century in Catholic tradition, but this year, it has additional resonance for those in the quickly-gentrifying community of Pilsen, where the museum is located. The dedication to those who were killed in El Paso reminds us that Mexicans and Mexican-Americans in this country are subject to discrimination, and in some places, whether through immigration status, cultural and racial oppression, or even targeted violence, they are in danger from American citizens.

The exhibition is curated in Spanish and English with both a foreign (American) audience and its own Mexican-American community in mind. Día de Muertos rituals are observed all over Mexico, and some might never have seen a particular regional celebration. Mexico includes many tribes of indigenous Americans (Maya, Huichol, Nahuatl, Mixtec, and more), Spaniards and other Europeans, Africans, and even smaller subcultures of religious groups such as Jews and Mennonites. Mexicans recognize and celebrate their “mestizaje,” mixed-race identity that combines indigenous and European roots. The mixing of these cultures isn’t always utopian, but in this exhibition, the cultural influences on display are valued, identified as a part of contemporary Mexico.

Implicitly, the exhibit comments on the inclusion and celebration of difference as part of a national identity—a lesson the United States should receive.

One section of the exhibit focuses on the “Costa Chica” of Guerrero, where Afro-Mexican culture informs the costumes, dancing, and music that happen during the Día de Muertos celebration. The Danza de los Diablos, or Dance of the Devils, according to the curator’s notes, is influenced by Spanish tradition as well as African masks and images. In this tradition, men dressed as devils, with masks of hides and horsehair, escort the spirits of the dead from the cemetery on the nights of October 31 and November 1. One, the Major Devil, cracks a whip, and his “wife,” another man in costume as a woman, carries a plastic baby doll and also cracks a whip at spectators and other participants. The dancers are usually “younger men and boys,” the curator reports, “as it requires tremendous stamina to dance for 3 or 4 hours straight.” 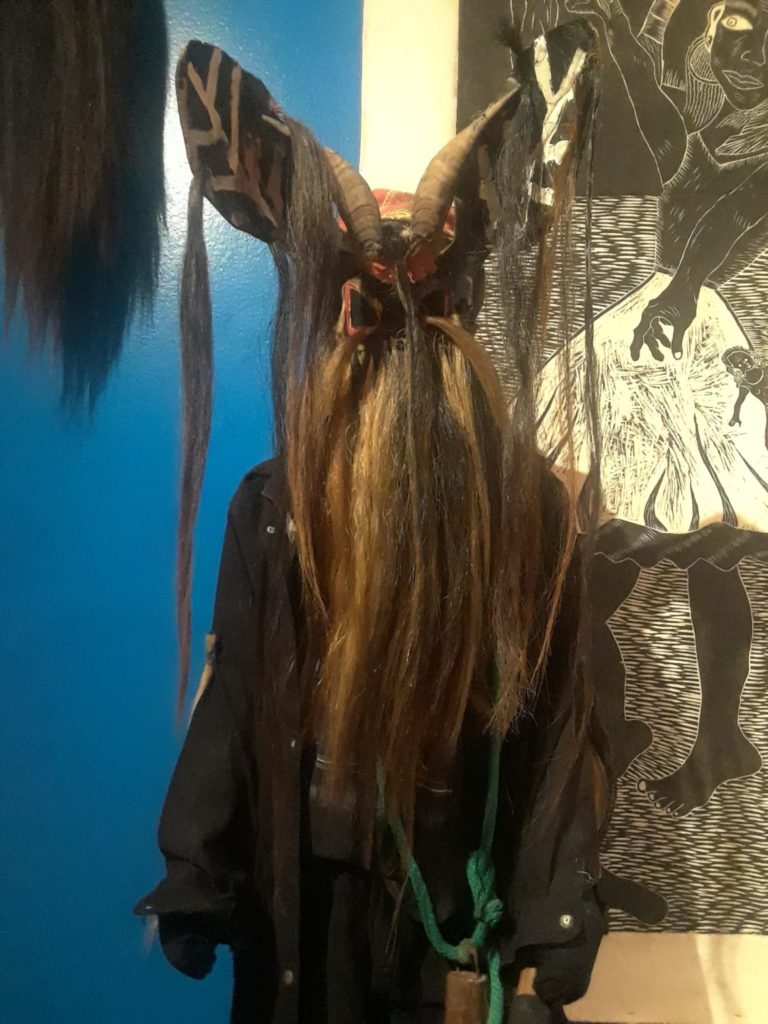 photo courtesy of the author

Though dancing and performing in masks is a frequent component of Mexican rituals and holidays, these masks are influenced directly by the escaped slaves that settled in the “Black Towns” of Guerrero. The curator also notes that African instruments such as the “bote” (made from a calabash gourd) and an instrument made from a “horse’s jawbone” are played during the Dance of the Devils. In the gallery, a video runs continuously, showing the dancers in costume making their way through one of the towns, harmonica music accompanying their route. Two life-size mannequins wear the costumes of a devil and his wife. Horsehair masks hung high on the wall flank a large etching of the ritual, and the musical instruments—the jawbone, a bote—are also on display. The room also includes a typical Costa Chica ofrenda (or offering), an altar decorated with flowers, food, photographs, and personal mementos. Like all the ofrendas in the museum, it is dedicated to specific individuals. The names and dates attached to the ofrenda give us a sense of the long cultural memory—and gratitude—of those who erect such altars.

The exhibition also includes an ofrenda for a Chicago resident, Elisa, nicknamed “Mama Licha.” A floor-to-ceiling display of photographs, marigolds, sugar skulls, butterflies, and candles, it commemorates the life of a woman who married in Mexico at age 17, moved to Chicago from Durango in the 1970s, worked more than full-time to help buy a house for her family, and went on to parent “7 children, 25 grandchildren, and 19 great-grandchildren.” She naturalized in 1996 with several of her children, was a member of her local Catholic church, St. Agnes of Bohemia, and was a much-loved member of the community of Pilsen. Photographs of Elisa through the years are on display, from early black and white photos to the large central portrait ensconced in an ornate silver frame and surrounded by marigold blossoms. Marigolds are sacred to the Día de Muertos celebration: marigold petals are scattered to lead relatives home from the cemetery. Though Elisa’s last names are not given, her extraordinary story indicates the deep roots of the Mexican-American community in Pilsen, and the importance of elders in the creation of a family and a community.

Another impressive installation was created by fourth, fifth and sixth graders of Summit School District 104 to commemorate the deaths of children in ICE custody. Titled “The Golden Cage/La Jaula de Oro,” it displays photographs of children who died in ICE detention centers, plaster casts of faces, hands, and feet, and a large golden cage filled with Monarch butterflies (whose yearly pilgrimage ends in both Michoacan and Mexico states). Unlike the other ofrendas, it’s much more austere. Only a few marigolds ring the base of the cage, and one single white candle with one sugar skull is placed underneath each of the seven photographs of children. The  song “La Jaula del Oro,” by The Tigres del Norte, inspired the work.

According to the accompanying statement, the students read and discussed the song’s lyrics and then interviewed family members about what they lost or gained by moving:

“We discussed current politics, the recent mass ICE raids, and the anti-Latino sentiments expressed by our nation’s president. We talked about what it means to leave everything you have ever known in order to transition to a new place surrounded by constant uncertainty, loneliness, and even fear. Finally, we talked about how these ideas might be expressed visually or symbolically.”

For many of these children, these topics of discussion are not theoretical. Their own families may be living under the fear of deportation—or living with deportation as a reality. A sign in the museum lobby, which also appears in the windows of homes in the surrounding neighborhood, indicates that “the inhabitants of this home are aware of their rights.”

This exhibition extends beyond the pieces I have noted. (The anima sola–devotional images of “lonely souls” in purgatory or burning in the fires of hell–are particularly sobering.) 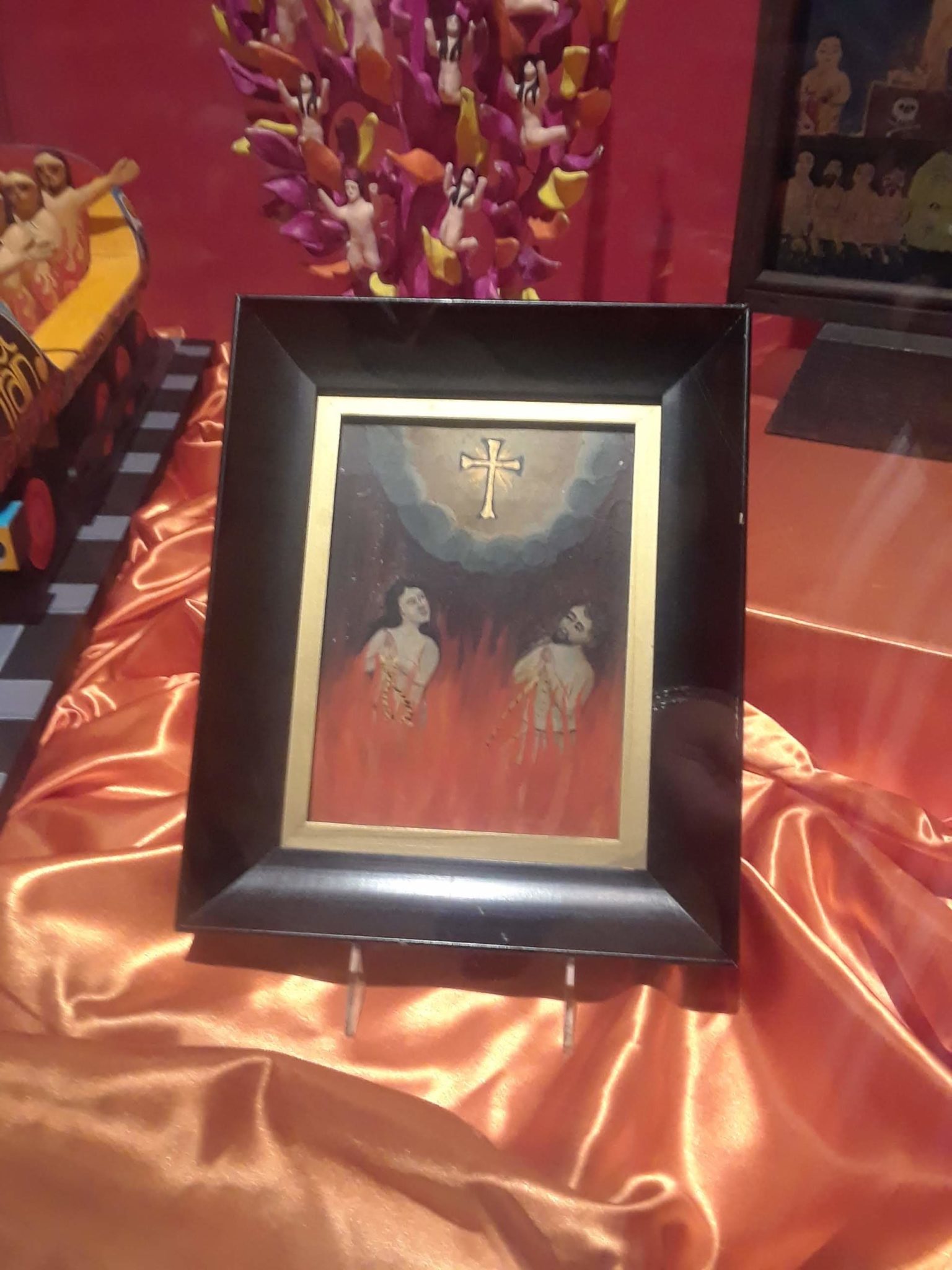 photo courtesy of the author

Chances are you’ve encountered some version of Día de Muertos, which in English is usually translated as Day of the Dead. In Spanish, it’s more like “Day of Dead People,” which seems awkward perhaps because it acknowledges the ongoing personhood of the dead, or simply because we in the United States have such an avoidant relationship with death. But it is good to keep in mind the lives of those we have lost, and to recognize the value of Día de Muertos celebrations, which recognize the dignity of human life, even in the celebration of the dead.

”Día de Muertos: A Matter of Life” is open at the National Museum of Mexican Art in Chicago until December 8th, 2019.

Susan L. Miller is the author of Communion of Saints: Poems. She has traveled extensively in Mexico and is currently writing a collection of essays about mortality in Mexican art and culture. She teaches at Rutgers University and lives in Brooklyn, New York, with her family.