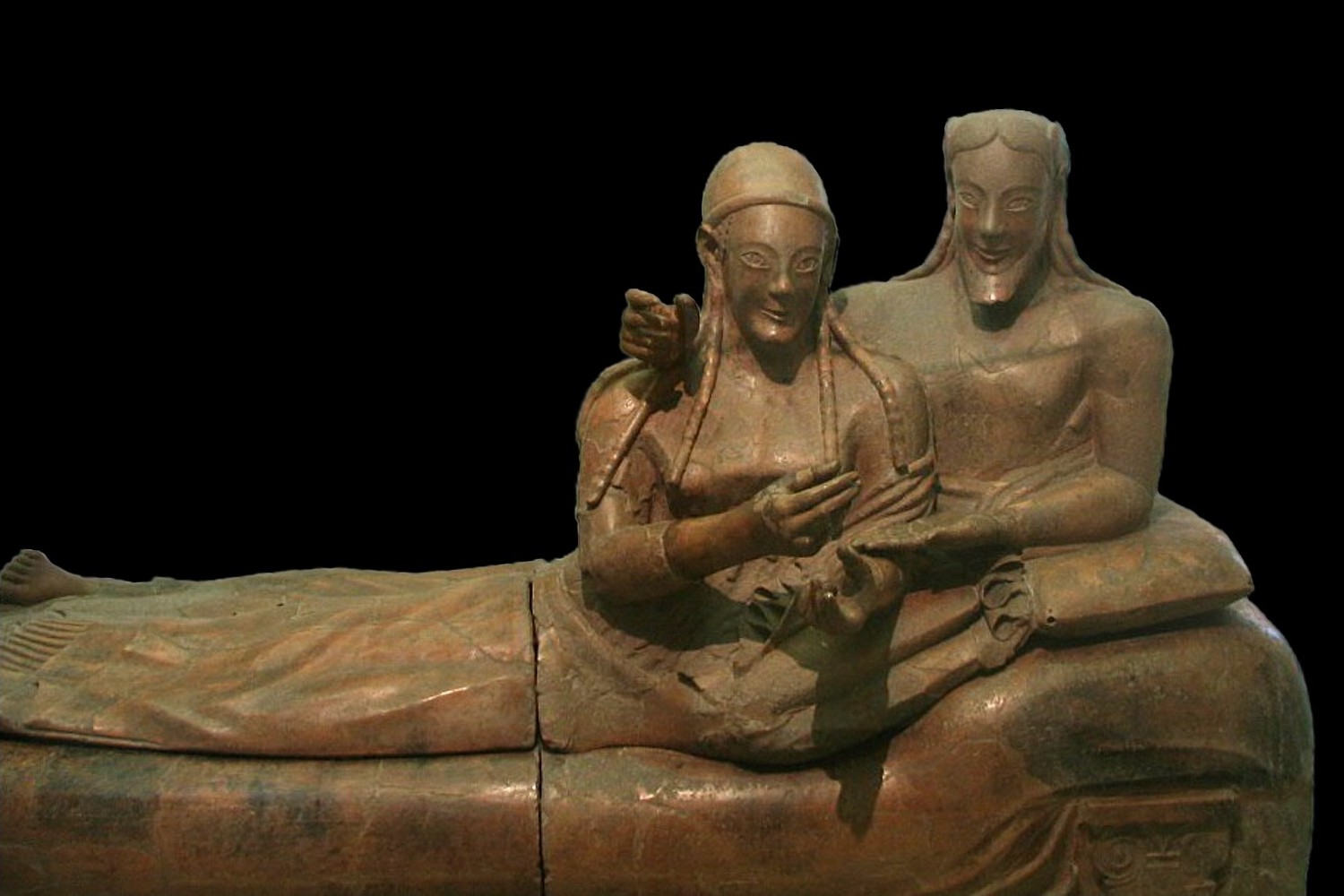 Sarcophagus of the Spouses (Etruscan)

A Lumbee friend described her mother’s relationship to family, from the vantage of her matrilineal world, as being like a door. The very word starts opening them. From door we are all too quick to rush to gatekeeper; our western and colonial habits of mind favor such things as the defense of property, watchmen along the ramparts, locks and bolts, and clear lines between inside and out-of-doors. The Baptists sing of salvation, One door and only one and yet its sides are two; Inside or outside, on which side are you?

But actually gatekeeper seemed the smallest part of what she was implying of her mother’s role in the life and health of her family. The emphasis laid more to admittance than exclusion, a passage between inner and outer worlds in multiple senses. I don’t think that one need be Lumbee to understand how motherhood might be understood this way, and I’ve known many non-Lumbee mothers, including my own, whose entire person seemed invested in the wisdom of free admittance, framing a worldview that begins there. It’s quite different to safeguarding and vouchsafing, those parsimonious tendencies of culture, mind, and ultimately affection that are perilous to men and women alike. Still, it is a continual struggle to know where to stand with respect to the door, and whether to direct our love to or for our children, and how these two postures are different and related. The door suggests the possibility of both, but more, it implies the importance of being open to who and what a child really is rather than whatever image is presented by love’s warped glass.

While acknowledging the astonishing and daunting difficulty of crossing over, in even the smallest authentic way, to a maternal pattern of culture in thought, I wondered if language might not provide one point of passage. So I dropped in on a friend who teaches Cherokee language, on a day when the lesson was, happily, all about family relationships. He started with a joke, delivered, like the rest of the lesson, in Cherokee. Translated in English, it goes like this:

The joke is that “who’s your daddy” is pretty much an unheard-of phrase in Cherokee, since the understanding of family relationships commences with the mother. From what I can tell, just about all humor springs from a sense of superiority or our discomfort with the instability of a superior position. The superiority here stems from an ironic position: you have just asked a useless question and your cultural roots are showing to the hairline. Even as single-mother families become more common in our society, the first questions of kinship reveal a patrilineal habit of thought: Who’s your baby’s daddy?

Instead, the first lesson of introduction in Cherokee is, Who’s your mother? Next came the words necessary to kinship understanding. Of course, words like “brother” and “sister” have fairly fixed meanings in English, but are unfixable as they roam around in culture and families, whether those families are nuclear, nuked, or denuclearized.

Cherokee is a challenging language since it omits some of the most common phonemes of English and, to the English-speaker, throws syntax, word order, and subject-object relationships into the air like so many scrabble pieces. To the general bogglement and gruntlement of my mind (the latter being the opposite of disgruntlement, and a happy place for a little piggy), it turns out that kinship relationships are case-specific in Cherokee. To the best of my understanding, male relationships are defined by “to”: you are to your brothers. But you must use a different case for your sisters, and my understanding is that you are more or less for them.

This is probably a weak approximation in English. I surmise that it has something to do with reception and projection of the self, and I suppose that a lot of gender mischief could ensue. For want of a better way to put it, as my friend explained it, Cherokee seems to have a kind of semantics for duderiffic—a kind of outgoing of the self that is reserved specifically for a relationship framed as brother-to-brother, some spirited, front running verbal tail-wagging. Who came up with the language of this matrilineal society? Is the experience of affection really that different?

During the course of the Cherokee lesson, as happens with complete immersion, I began to understand, in a mysterious way, the questions that my friend was asking without knowing exactly how. He asked about who my mother was, and I mumbled a reply, and then something about—an egg?

I assumed I had misunderstood. Was it something about a good or bad egg?

If your nose works, you know instantly when you’re faced with a bad egg, which stinks unto heaven.[1] The phrase “good egg,” which seems more tenacious in the Midwest than elsewhere, is said to derive simply from the opposite of that. Since eggs symbolize societies nicely, shining shoulder to shoulder and largely indistinguishable in their ranked boxes, good eggs are by implication good neighbors, and the term, in my understanding, implies a certain kind of cheerfully unexamined good citizenship. Whereas a bad apple soon spoils the barrel, eggs offer us optimism: bad ones occur routinely, but aren’t poisonous to the whole. Much of your disposition to human nature rests on whether you prefer your people in a barrel or the carton.

What does it say of our creed that we only hear of a bad seed and good eggs? I prefer to think of the latter in way that stretches back to my days as an undergraduate, when, crammed with liberal arts, there was time to do such perfectly important things as studying art.

The Etruscan Sarcophagus of the Spouses resents one of the enduring riddles of art history: what was the couple holding? It had to be something small but deeply meaningful. Others have speculated, and I would place my first bet, that if the woman with the egg-shaped hat held anything in her right hand it was indeed an egg, and a good one, for all the ages to see. It would be understood instantly as an enclosed orb, paradoxically signifying free admittance, too, for as long as life moves between and through the generations. Jauntily self- possessed and arrested in their place at the threshold of life and death, were the objects the couple held to or for us?

Case matters, not merely for grammar, but self-conception. Suppose we push this experiment to its conclusion and try it out in ultimate terms:

God is for us

This last seems to be the beginning of all our education, and it points to a key distinction: is it more useful to know God apophatically (by what God is not) or cataphatically (by affirming what he is)? Try a bit of both: God is not for us but to us. And its converse, God is not to us but for us. You have arrived at the distinction between the watchmaker and the interventionist.

So what is the case of my daughter, and love for her, in English, in Cherokee? For its part, Cherokee offers only an idiom for daughter, for which there is no word in the English sense. Instead, the word for daughter and egg are one and the same. Beneath this, one senses a wonderful sort of gynolatry; a son is a son is a son, but a daughter is an egg. And notwithstanding the reproductive subtext and particles, as a Cherokee man, if I should speak of my daughter, she is still my egg, too.

The ritual of a father “giving away” his daughter is perhaps the deepest expression of our culture’s paternalism, and its dative habit of mind, with all its confusion about to and for, which passes on to the ablative, the case reserved for going away that leads to our peculiar regard for the genitive, more familiarly known as the possessive case. In fact, when I look at my daughter, Vera Rose, I am continually fascinated by the door I see her standing in, one of welcome through which the breath of creation itself might pass, sensing in her a capacity for drawing forth and sustaining life that is both different to, and complementary of, my son. Yes, she stands in the door, at once to and for the world.

My first lesson in Cherokee, then, and of father-daughterhood, is this: My egg, Vera Rose, is a good egg.

[1] Another aside about humor: jokes about the way that old people “smell” aren’t actually so much about what they smell like as they are, per usual, based in a sense of superiority. We younger folk, ha ha, retain a command of faculties, whereas the elderly gradually lose their ability to sense what’s unpleasant. Is it any accident that the very young and the very intelligent (sometimes the autistic) see and reject the gloating aspect of codes of thoughtless humor?

Bryan Giemza is an Associate Professor of Humanities and Literature in the Honors College at Texas Tech. In addition to his teaching and research he serves as public scholar for the Sowell Family Collection in Literature, Community and the Natural World. He has also served as the Director of the Southern Historical Collection at the University of North Carolina at Chapel Hill.