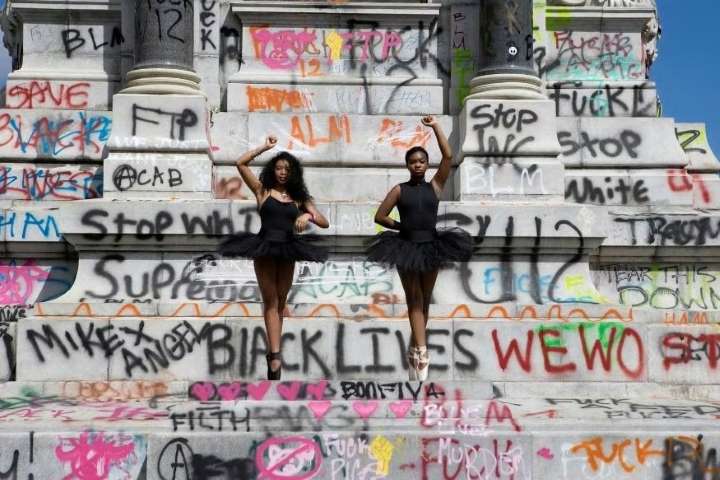 When a monument is targeted during a protest, as is happening all over the US in the wake of the murder of George Floyd, it is often framed as a violent escalation. Often mentioned in one breath with smashing windows or looting, it is presented as a regrettable deviation from the idealized path of peaceful protest.

Yet these attacks on monuments cannot simply be dismissed as unthinking acts of destruction. In many ways they are transformative and profound.

The language of media reports often obscures this. Across the political spectrum, from the Washington Post to Fox News, labels like “vandalizing” and “defacement” conceal the complexity of these attacks.

The Oxford English Dictionary defines a vandal as someone who “acts like a… barbarian; a willful or ignorant destroyer of anything beautiful, venerable, or worthy of preservation” (italics mine).

By this definition, many of the recent attacks do not qualify in any sense of the word: the protestors’ actions are not ignorant; many of the monuments they target only seem respectable; and finally, many protestors do not simply destroy. Rather, they add new layers of meaning to these deeply problematic sculptures.

Since many of these monuments have been around for so long, they have become seemingly neutral objects woven into the fabric of their cities, things many people see and at the same time do not see. They hide in plain sight as innocuously as trees or lampposts. And yet they are one more addition to the long list of things that make public spaces hostile to people of color, since they memorialize figures whose actions are at the root of the persecution and pain of people of color today.

They are toy soldiers, but gigantic ones, in “venerable,” gleaming marble or bronze, keeping watch in the name of their originals—who were probably much shorter, much less handsome, and are certainly much less alive right now.

Yet all of this changes when monuments are toppled, burned, or graffitied. Graffiti on a monument is not simply a “scrawl,” as the Washington Post calls it, a word reminiscent of a naughty child doodling on the kitchen cabinets in magic marker. Instead, it re-inscribes a monument with the meaning its noble surface conceals: the blood, the violence, the greed. Many of these so-called scrawls ring loud and clear. Words like “traitors” or “spiritual genocide” emboss the monument with a new historical narrative.

When a sculpture is toppled, it’s not an instantaneous disappearing act, where you blink and there’s only an empty pedestal left. In between, there is the moment of falling: a figure that seemed set in stone is now moving, the tectonic plates of history finally shifting. The bronze or marble comes alive for a second. What was up is coming down. And the sight is truly spectacular: rigidity becomes kinetic; different histories break through the cracks.

Something else happens here. The monument does not stop being a monument, but it becomes a memorial of a different kind: an invocation against itself and its original message. A confederate monument becomes a symbol of the Black Lives Matter movement. Briefly, a small part of public space is reclaimed by suppressed narratives of people of color. The monument becomes a document.

And even if the statues are “cleaned up” (as though these imprints of pain are dirt to be washed off) or moved to a more “discrete” location, this moment when history comes alive has been captured and shared all over social media and the news: most people will see this monument precisely at the time when it was conveying an entirely different message from what was originally intended.

Even spraying graffiti on a “sympathetic” monument such as the Robert Gould Shaw and the Fifty-Fourth Regiment Memorial, which honors African American Civil War veterans from Massachusetts, should not be disqualified as a raging, irrational act. After all: what are monuments for? Is the sole function of a monument to be as shiny as possible and not look any different from the way it looked over a century ago? Surely not.

Monuments are meant to convey our ideals or act as warnings—they are our ideological lighthouses. What if their message becomes muted? Is graffiti stating that black lives matter truly an affront—or is it another symptom of a repressive culture that all too often brands graffiti as dirt or damage, rather than as a tool of expression for those who cannot otherwise bring their histories to public spaces?

The death of George Floyd has shown once again how urgent and necessary systemic change is. In many cases, attacking a monument should not be seen as undesirable collateral damage, like looting a TV. Instead, these attacks are like gashes in the self-satisfied veneer of democracy and respectability, creating room for new narratives. In this case, immutable preservation is the actual violence.