Still looking for the perfect book for that person on your Christmas list? We rounded up our favorite ImageUpdate Staff Picks from the past year to give you an Image-approved selection.

For the Friend Who Wants Time to Reflect: 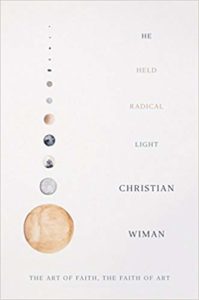 He Held Radical Light, Christian Wiman’s slim new volume of essays on art, death, and eternity, demands to be read with a level of focused attention that is hard for me to come by these days, but it repays the effort.

Picking up where My Bright Abyss left off, it’s a chain of essays about contemporary poets, including A.R. Ammons, Denise Levertov, Seamus Heaney, Susan Howe, Donald Hall, and many others, in which Wiman probes his own youthful desire to write “a poem that would live forever”—a wish intensified by his battle with cancer. That goal might seem ludicrous, if Wiman were not so self-aware, so sincere, and such a thirsty reader of poems. As it is, the idea of such a poem, possible or not, feels worthy of every attention.

Essays on the what art can do in the face of death are interlaced with funny and touching moments of literary memoir from Wiman’s time as editor of Poetry magazine. For example, a reading of Mary Oliver’s “White Owl Flies into and Out of the Field” as a poem about mortality appears with an anecdote in which Wiman and Oliver, walking in Chicago, discover a dead pigeon on Michigan Avenue and Oliver pockets it.

Wiman rejects the notion that poetry is a “personally redemptive activity,” but is impelled by the idea that it is a means of being drawn more deeply into the created order and from there, maybe, to the creator. “The hook is both God and void, grace and pain,” he writes.

Wiman expects a lot from poets, including himself. Also from readers. To shut out the world and enter this book is to join him, if only for a few hours, in an oasis where language might really do anything, even live forever.

For the Lover of Poetry and the Color Blue: 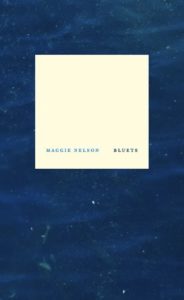 “Suppose I were to begin by saying I had fallen in love with a color,” Maggie Nelson writes in the opening of Bluets. The 2009 book is a series of 240 prose poems that, when taken together, compose a novella-length essay about loss, love, and the narrator’s longing for the color blue. The poems, which Nelson calls “propositions,” move between moments of memoir and philosophical reflection. As with the opening sentence, they invite readers to suppose and speculate alongside her. Nelson might offer an axiom to ponder and then will often subvert it in the following proposition, creating a sort of swirling effect. The text’s one constant is her love for blue itself, which manifests in how sharply she pays attention. “How could all the shreds of blue garbage bags stuck in brambles, or the bright blue tarps flapping over every shanty and fish stand in the world, be, in essence, the fingerprints of God?” Nelson says. “I will try to explain this.” And try she does, by way of a book that’s disruptive, and soothing, and unlike any I’ve readbefore.

For the Friend Seeking Fantasy: 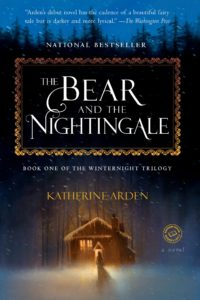 The Bear and the Nightingale, Katherine Arden’s impressive debut novel, recalls the enchantment of the fairytales my mother read to me when I was a child, but it is much darker, colder, and more intricate. The story takes place in early medieval Russia (what was Rus at the time), in a remote, frozen village near the forest. Vasya, a young, headstrong girl with strange abilities—who sees and talks to the domovoi, the spirit of the hearth, and the other old gods—pushes against the boundaries set by the village, a zealous priest, and her cruel stepmother. The novel explores tensions between the pagan and the Christian, what it means to be faithful, and the sacrifice faith requires. The prose is elegant and captivating as crystalizing snow, and Vasya is a fiery protagonist in the dark landscape—you’ll be rooting for her all the way.

For the Friend Searching for Her Voice: 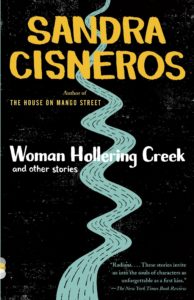 I have adored Sandra Cisneros since my tenth grade English class read The House on Mango Street. This book introduced me to vignettes, those brief flashes of color, for the first time. They attracted me, because they were the closest I had ever seen prose come to poetry. Their brevity somehow made me mull over them longer, each page forcing me to take a break, look up, and do some deep breathing. Woman Hollering Creek, a collection of short stories dealing with the complexities of Latinx, Chicanx, and immigrant identity, forces the reader to take those same reflective pauses. Cisneros draws us into her world, a world of Spanish slang sprinkled into English sentences. This is a world straddling the Mexican-American border, wobbling at times to one side or the other. The reader follows various characters, mostly women, in both Mexico and the United States. These women struggle with issues of family, sexuality, abuse, infidelity, and finding a home within the many cultures of the borderlands. They are searching to embody and draw forth their power as Mexicanas y Chicanas against a world that often forgets or exploits them. They are searching for their voices, so one day they will holler from joy and freedom instead of pain and frustration.

For the Daughter or Mother Whose Strength Sings: 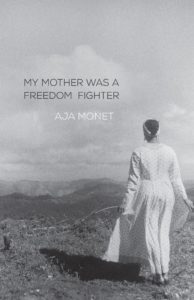 When I was growing up, my parents traveled often, especially my mother. There always seemed to be conferences scheduled over Halloween and Valentine’s Day, and she missed many of my concerts and soccer games. So, like many travel-weary parents, she turned to the apology that is gift giving. I got rocks from Morocco, a shawl from Spain, Egyptian perfume…but over the years she learned that I preferred the stories that came with the gifts to the objects themselves. Gifts made a revised reappearance, though, when I chose my college major. I study (and write) poetry, a genre my parents have never cared for and do not understand. Cue gifts. To apologize for loving my poetry despite having no idea how to appreciate it, my mom buys me books of poems, and, for someone who claims to have no knowledge of good poetry, she has incredible taste in the books she buys. Her latest gift to me is a collection by Aja Monet entitled My Mother Was a Freedom Fighter. This book is an ode to the female voice, to the women who have “not yet been taught / to dim.” Monet is not only a poet, but also an activist, performer, and songwriter. Each of these identities rages through in her poetry as she voices the unvoiced and challenges her readers: “what of my speaking is not poetry / if I make this language sing.” Her work uplifts mothers and sisters, all doing their part to fight for a better world. At the same time, her work has also reminded me of my own calling as a poet, and of how much I appreciate the warrior who is my own mother. A woman who fought her way to the top of a male-dominated industry, traveled to strange countries on her own, and always uplifts and supports me, no matter how far I am from her physically, or how far I am from the work she understands.

For the God-Haunted Friend: 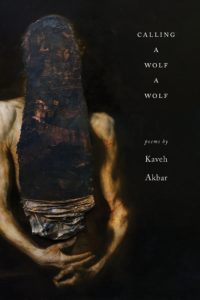 “It's amazing what you can find / if you just dissect everything” Kaveh Akbar tells us in his glittering debut, Calling a Wolf a Wolf.  Balancing themes of Iranian-American heritage, alcohol addiction, and faith with both reverence and violence, Akbar's poems read like confessions, offering insightful new language to describe timeless conditions like doubt and hunger. The collection wields haunting imagery, evoking vague mythologies with animals and jewels so that a mouse devouring its own tail becomes a metaphor for destructive addiction and televised violence draws the lofty spiritual down to earth. While the imagery in the collection is raw, Akbar resists the temptation to “reduc[e] / a life to its most grotesque artifact,” tempering pain with tenderness, chaos with specificity. I was consumed by the recurring “Portrait of the Alcoholic” poems, which punctuate Akbar’s imaginative world with moments of confused fragmentation and wonder: “this cave / is big enough for everyone look at all the diamonds.” Equally memorable are the glimpses of family, poignant pictures like in “Learning to Pray” where “the twilight stripe of father…worshipped / as the long faultless tongue of God.” Altogether Calling a Wolf a Wolf reads like a lush exploration through the darkness of alcoholism as Akbar (and the reader) “fumble toward grace / like a vine searching for a wall.”

For the Friend Who Wants to Reconnect: 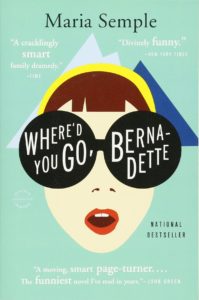 When I first read Maria Semple’s novel Where’d You Go, Bernadette, I was nineteen years old and on vacation in Charlottetown, Prince Edward Island. I couldn’t have felt further away from the Seattle that Semple described, or related less to her middle-aged titular character.

Fast forward five years, and I’m a Seattleite who felt surprisingly receptive to Bernadette’s struggle with isolation. In the middle of the narrative, Semple delivers a gut punch in the form of a fourteen-page letter written by Bernadette, a former MacArthur grant-winning architect, to her old mentor, in which she mostly complains about Seattle, using several of the common annoyances I bring up in conversations with my friends and family on the east coast. In response, her mentor writes only four sentences, concluding: “If you don’t create, Bernadette, you will become a menace to society.”

Semple presents her protagonist’s mid-life crisis as one born of complete disconnection: disconnection from her art, from her husband, and from her city. I love this novel for many reasons, including its wit and the many playful jabs at Seattle culture. Moreover, it has become one of my favorites for its portrayal of the disconnection I have experienced in all areas of my life, including my faith. I find a special kind of peace in Semple’s eventual conclusion that there will always be opportunities to reconnect. I hope that remains true, no matter one's age.

If you enjoyed this list, you will love ImageUpdate! Make sure you’re subscribed here.