There is no such thing as an artist: there is only the world, lit or unlit as the light allows. When the candle is burning, who looks at the wick? When the candle is out, who needs it? But the world without light is wasteland and chaos, and a life without sacrifice is abomination. What can any artist set on fire but his world? … What can he light but the short string of his gut, and when that’s burnt out, any muck ready to hand? His face is flame like a seraph’s, lighting the kingdom of God for the people to see; his life goes up in the works; his feet are waxen and salt. He is holy and he is firm, spanning all the long gap with the length of his love, in flawed imitation of Christ on the cross stretched both ways unbroken and thorned. So must the work be also, in touch with, in touch with, in touch with; spanning the gap from here to eternity, home.

FEW BOOKS TO COME ACROSS MY DESK  lately have stirred so many emotions as The Abundance: Narrative Essays Old and New by Annie Dillard. In the Atlantic, the critic William Deresiewicz says that the book “might just as easily be called The Absence,” because the author has published nothing new for years. It’s a clever lead-in, but devoid of substance. Our online culture, with its constant demand for hitting the feeds at peak times every day, may dictate constant publication unto death as a requirement for any self-respecting author, but thank God Annie Dillard grew up before the advent of the internet. I prefer to look on her body of work and celebrate the abundance.

In 1994, Image was in its infancy, and I was living in Wichita and working with the Milton Center, a nonprofit devoted to fostering excellence in creative writing by people of religious faith. Thanks to a major grant, we were able to put on a conference, the highlight of which was giving an award to Annie Dillard. We chose as a theme the phrase “Spanning the Gap,” taken from Holy the Firm and included in the epigraph above. We wanted to explore the way writing itself might span the gap between here and eternity.

I was assigned the task of introducing her, which more or less scared the hooey out of me. I had only read a few scattered pieces of hers, and the only full book I was able to read in preparation was Holy the Firm, because it is so short.

I remember very little about the introduction, except that I described her as “a nature writer on speed.” What I lacked in insight I tried to make up in verve. Her reading was of course electrifying as she paced back and forth, declaiming from one book or another. The audience was pleased.

Later, at the reception in her honor, she said something appreciative about the introduction and we exchanged pleasantries while my heart thudded in my chest like Muhammad Ali taking out a lifetime of frustration on a punching bag. Later I would write her to invite her to join Image’s editorial advisory board, and she would send three poems that we later published.

And that, I thought, was that. Except that it wasn’t.

A couple years later I was at a literary festival manning the Image table, where we sold back issues and subscriptions. I knew that Annie was going to be one of the headliners for the event, but it never occurred to me that I’d encounter her in person.

At one point I looked up from the table to see something of an entourage passing by across the hall. There was Annie, striding purposefully ahead, surrounded by a gaggle of English majors from the college where the festival was being held. Then she turned her head and spotted me. Without breaking stride she veered suddenly in my direction, and as she approached the table I stood up shakily. Calling out my name, she spread her arms wide and engulfed me in a bear hug. And just as suddenly she was off again, trailed by her young acolytes.

Well, I thought, that’s that. But it wasn’t. In the cafeteria at lunch I had just filled my tray with pizza and a soda when I saw her again. Once again she strode in my direction.

“What’s wrong, Gregory?” she asked. (She has always called me Gregory.) “What did I do to offend you?”

I mumbled out a garbled protest.

“But when I hugged you earlier, you seemed to shrink away,” she said.

Perhaps I had quailed a bit when she came hurtling at me with that hug.

“I’m sorry,” I muttered. “I guess I was just taken aback, since, well, you’re Annie Dillard and I wasn’t sure you even remembered me.”

“It was those poems I sent you,” she replied. “They were shit, I know.”

I assured her that they certainly were not, and that seemed to satisfy her. Off she went.

Certainly, I mused, that was finally that. But no.

That evening was her big reading, held in the college’s gymnasium, which was filled to capacity. I had managed to secure a seat a few rows back and settled in. After the introduction she began her usual pacing as she thumbed through one of her books—For the Time Being, I believe. Then she stopped, shielded her eyes against the bright lights, and looked out into the crowd.

“Gregory,” she bellowed. “Are you there?”

“Yes, Annie, I’m here.” The people in the seats next to me leaned away and stared.

“Gregory, I hate repeating what I’ve read, even at a different venue. Did I read the passage about [something or other] in Wichita?”

I swore that she had not.

After reading a few passages, she told the crowd that she had had the privilege during the day of visiting a public high school in the town, where she spoke to the students about literature.

“At one point,” she said, “I mentioned the poetic theology of Gregory of Nyssa and I was delighted to see them all nodding, as if they were familiar with his thought. Later, when I told the school’s principal about this, he said the students probably had not heard of Gregory of Nyssa but just nodded as a sort of polite reflex.”

Then she offered another passage or two, and it was time for Q&A. The questions were about as bland and generic as possible, including things like what time of day she wrote and whether she wrote every day. I grew increasingly frustrated. Here was a world-class mind who had read from a brilliant work of theodicy, alluding to Teilhard de Chardin, the Hasidic masters, ancient Chinese culture, and more, and she was reduced to talking about her writing habits.

As the questions began to peter out, I fought to hold my tongue but failed.

“Annie,” I said after raising my hand, “can you tell us a little bit about why you love the Hasidim so much?”

“Is that you, Gregory? What a wonderful question. Thank you.”

And she proceeded to give a bewitching five-minute exposition of what it was about these Jewish mystics that moved her and thanked the audience.

As the clapping died down, the gentleman sitting next to me turned and shot me a quizzical glance.

“You must be Gregory of Nyssa,” he said.

I paused for just a moment. 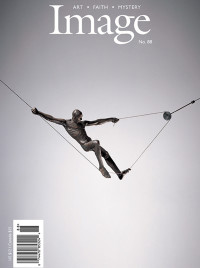