IN HIS BOOK The World Beyond Your Head, Matthew Crawford talks about what he calls “ecologies of attention”—the social infrastructure that shapes and channels the way we attend to the world. In an earlier age, quiet spaces cultivated the sort of attention that freed you up to read War and Peace. In the frantic ecology that is now our default, you can’t pump gas or ride an elevator without some corporation trying to steal your attention.

We need the arts to imagine the world otherwise. But such an invasion of the imagination, such an invitation to another world, has to overcome its competitors. This has always been the case, of course. The long human grind of mere survival, still a daily reality in too many places, has always threatened to consume any time or energy for play. Plato’s philosopher-kings banish poetry from the city, while consumerism’s corporate-kings are more sly, turning every endeavor into a commodity. Fascists shut down the theater while the gods of stem shut down the music program.

But human longing has always managed to overcome such threats in order to make art that limns the beyond. Somehow our ancient forbears, exhausted by hunting and gathering, made time to create the ancient beauty that adorns the walls of caves in Lascaux. A Hebrew shepherd, and the poor of Appalachia, made stringed instruments sing. Those oppressed by slavery bequeathed to us jazz and the blues. We don’t deserve A Love Supreme. Out of the unspeakable horrors of the Shoah, Night appeared.

Every work of art that is true or beautiful is, one might say, a pièce de résistance, telling the truth about how the world really is and offering us a portal to what we’re called to be. Such art resists lies, apathy, and all the forces that would diminish us to mere consumers or enemies or copulating pieces of meat. Such imaginative works are at once disconcerting and enticing. They remind us that we’re not as good as we think we are, and they call us to so much more than this. As in Terrence Malick’s Thin Red Line, a dappled light finds its way through the cathedral of palms while war rages below, making us look up and wonder. And hope.

But how to overcome distraction? How to break through the bedazzling glare of our screens, the latest threat to parade as an angel of light?

The problem isn’t simply that the technologies of distraction prevent us from making or appreciating art. This isn’t simply a competition for attention. The concern is more egregious: our distraction demeans us. Like the dreaded Entertainment in David Foster Wallace’s Infinite Jest, our social media feeds are dopamine dispensers. In a way that Wallace couldn’t have imagined, we carry in our pockets the possibility of unceasing jolts of novelty. We just have to open Facebook or Instagram. There’s always something new in our feeds: some tantalizing delight, some new outrage, and most of all, some new affirmation—a like, a fave, a comment, like an intravenous shot of recognition.

If I’ve learned anything from Saint Augustine, it is an eyes-wide-open realism about our tendency to ruin things. And so, unsurprisingly, even our distractions have been hijacked by the worst angels of our nature. Now we turn to these devices over and over again looking for that peculiar joy of late modernity: the joy of outrage. The delight we take in recognizing what is detestable. The twisted bliss of offense. The haughty thrill of being aghast at the latest transgression. We can’t believe he said that, and we secretly can’t wait for it to happen again. Like love’s negative, the joy of outrage is expansive: it only grows when it is shared.

And so we spend our days shrinking not only our attention but our souls’ capacities. In some cosmic attic, our collective portrait, like Dorian Gray’s, is absorbing all the effects of our habits. With each hungry “refresh” and mocking retweet and smug dismissal, this portrait of our soul is shriveling beyond recognition. We are better than this.

What is the calling of art in such a world? And how can the arts disrupt these habits, perhaps even teach us to be disappointed by distraction? Who will sing the song that transports us?

I won’t pretend the answer is simple, or that I have figured this out. Heaven knows how much time I’ve lost to Twitter, and how many times I’ve had to apologize. I have no plans to delete my account in a quest for purity.

But I know at least this: Instagram won’t save us, and tweeted verse will not undo what we’ve done to ourselves. But neither is there any special enchantment to reading in print. So this is not the Luddite’s redoubt, nostalgically canonizing codex or canvas as if history had come to an end in some glorious past. Every medium now reaches us inside the ecology of attention masterminded by Silicon Valley. We take pictures of our books and coffee, for heaven’s sake. The point isn’t platform but desire: what do we want when we pick up our phones? We don’t need better media, or to romanticize old media. We need to change what we want.

In a world of incessant distraction, the way out might look like learning how to be bored. A little ennui could go a long way; it could be the wardrobe we need now. We need to learn how to be bored in order to wean ourselves off distraction and open ourselves to others and the Other—to make ourselves available for irruptions of grace.

In a recent conversation with Terry Gross, the filmmaker Paul Schrader made a provocative observation: “People don’t leave church because they’re bored,” he suggested; “they go to church to be bored.” (The resonance this has for me personally might stem from our shared formation in Reformed churches.) But what Schrader means by “boredom” here is something more like stillness, the quiet that is the condition for contemplation. The quietude that is a prelude to reverence. To listening. To maybe even hearing.

For a culture jacked up on diverting entertainments, such stillness is going to look and feel like boredom. And it will be indescribably difficult—as impossible as a Holstein landing a grand jeté.

But what if art—paradoxically—could teach us how to be bored? It’s no accident that Schrader’s affinity for holy boredom parallels his devotion to transcendental style in film and his appreciation for “slow cinema” (even if he insists on a difference between the two). In the new edition of his book, Transcendental Style in Film, Schrader discusses boredom as an aesthetic tool. It is the cinematic manifestation of a principle: “Deny the viewers what they seek. Deny, deny, deny.” (Why am I thinking of Calvinism again?)

“Why would a viewer put up with such abuse? Such boredom?” Schrader asks. “Well, most viewers don’t,” he admits. And there may be a broader truth for us to consider there. But he goes on to note another possibility. Slow films, he says, can “hook the viewer.” Masters of slow cinema, he points out:

use boredom as an aesthetic tool. Boring morphs into mesmerizing. These are the truly important films. Why do we take it? The boredom. The distance. …[B]ecause effective slow cinema filmmakers are masters of anticipation. Employing striking visuals and auditory tricks and bits of activity, the slow film director keeps his viewer on the hook, thinking there is a reward, a “payoff” just around the corner. It’s adroit blackmail. If I leave, I’ll miss what I’ve been waiting for. Even the seasoned viewer of slow cinema anticipates something. Some moment. Some unexpectation. The wait will be worth it.

We need artists with the courage to teach us how to be bored. Who tease us with anticipation even when we’re befuddled by the poem. Whose prose demands an attention that we want to give because of promises laden therein. Whose sculpture arrests us and frustrates us and jackhammers into our soul and unsettles us with recognition. The creators who teach us to be bored will be cultivating in us habits of stilled attention in which we might finally hear our creator.

Sitting on the corner of the Tuileries Garden, on the bank of the Seine, is the remarkable Musée de l’Orangerie, a gem that displays 145 paintings collected by Paul Guillaume. The collection is a who’s who of early twentieth-century French painting, featuring works by Cézanne, Gauguin, Matisse, Modigliani, Renoir, and many others.

But on a recent visit I was taken with the role played by Claude Monet’s famous Nymphéas—the eight massive canvases of water lilies painted especially for the museum’s space. Before you descend to the main collection, you are invited into two oblong rooms where muted natural light falls gently from skylights. Taking up almost the entirety of the walls are swelling images of Monet’s gardens at Giverny. In the first room, you inhabit the garden through time—from darkness to rising sun to the golden hour of twilight and the spooky beauty of dusk. In the second room we are invited to see—or perhaps better, sense—the ponds and lilies and willows from different angles, to get lost in the garden, as it were, to float on its ponds.

There is a hidden intentionality behind all of this, a partnership between the artist and the museum. Monet made the promise to donate his work the day after the Armistice in 1918. He wanted to create a monument to peace and give a gift to the people of France. But he also knew something about the world in which they lived—the fog of war; the doldrums of a dirty, demanding city; the exhaustion of work. So as he envisioned his work and its role in this space, he was conscious of a desire to create a sanctuary. Conceiving the installation early on, Monet wrote, “Nerves strained by work would relax in its presence, following the restful example of its stagnant waters, and for he who would live in it, this room would offer a refuge for peaceful meditation in the midst of a flowering aquarium.”

Not everyone will be able to achieve such peaceful meditation (“most viewers don’t,” Schrader reminds us). Monet imagined all of the competition outside the gallery—the specter of war, the burdens of industry and commerce. He couldn’t have imagined all the competitors that would make their way inside: the demanding tour-bus drivers clapping to keep their customers on schedule; the selfie sticks and preening postures of those who reduce his work to a backdrop. It’s not easy to be bored. It’s harder than ever to float.

Teach us, artists, how to be bored again. Invite us into the boredom that is the antechamber to the mesmerizing. Tease us with some unexpectation. Bore us so that God can bore into our souls and we can find ourselves again. 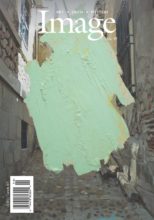