Emmanuel Osahor is a Nigerian-born Canadian visual artist based in Toronto. His practice engages with beauty as a necessity for survival and a precursor to thriving, depicting gardens as constructed sanctuaries that manifest attention and care. By prioritizing engagement with the beautiful, his paintings offer space for tending to the complexities of marginalization and inequality inherent in contemporary existence.

Image: Could you speak a bit about your experience immigrating to Canada and the perspective that has given you?

Emmanuel Osahor: In Nigeria, I watched a lot of North American TV, and given the way North America represents itself to the outside world, it’s easy for a young person to believe that it is some sort of paradise, especially in contrast to the way the African continent is depicted in the same media. You start to think there is something wrong with your continent, because we are described as “developing,” and North America is “developed.” I thought this was because there were still extremes of poverty and marginalization in Nigeria, but once I arrived and started building a life in Canada, I realized that the same poverty and marginalization exist here. When you read the news more closely, you realize that, wait a minute, no one knows what they are doing! 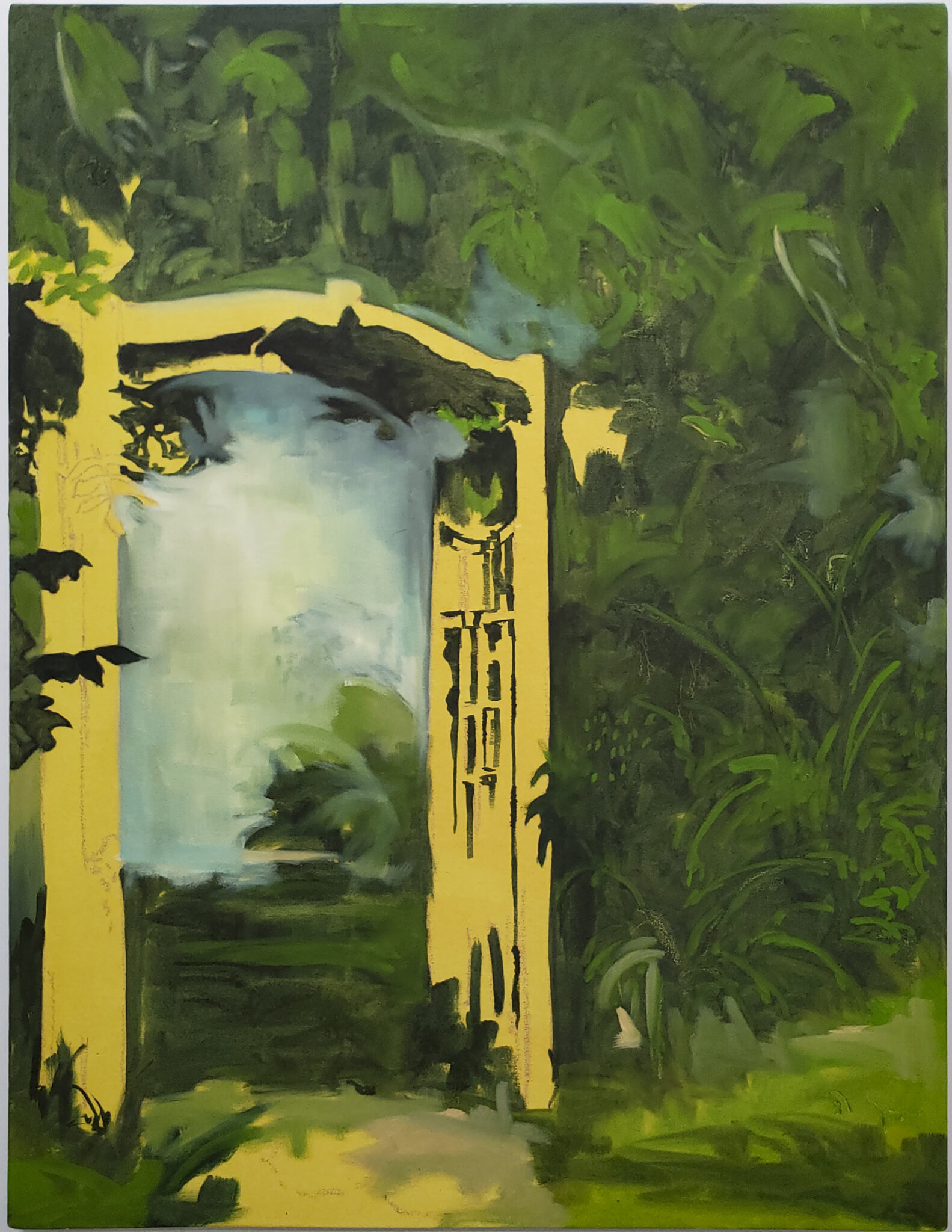 EO: It was profoundly influential, and I think it gets to the religious influence in my work, which is this experience of the “already and not yet.” I’ve been struck by the immense beauty in the communities I have been a part of, both in Nigeria and now in Canada, as well as grieved by the levels of hardship people face because of injustice, and these days I often find myself not knowing what to do with this two-sided coin. The motif of the garden, which I explore in my work, has become a place for me to sit with this contradiction. Not to ignore it or provide solutions, but to just sit with it. 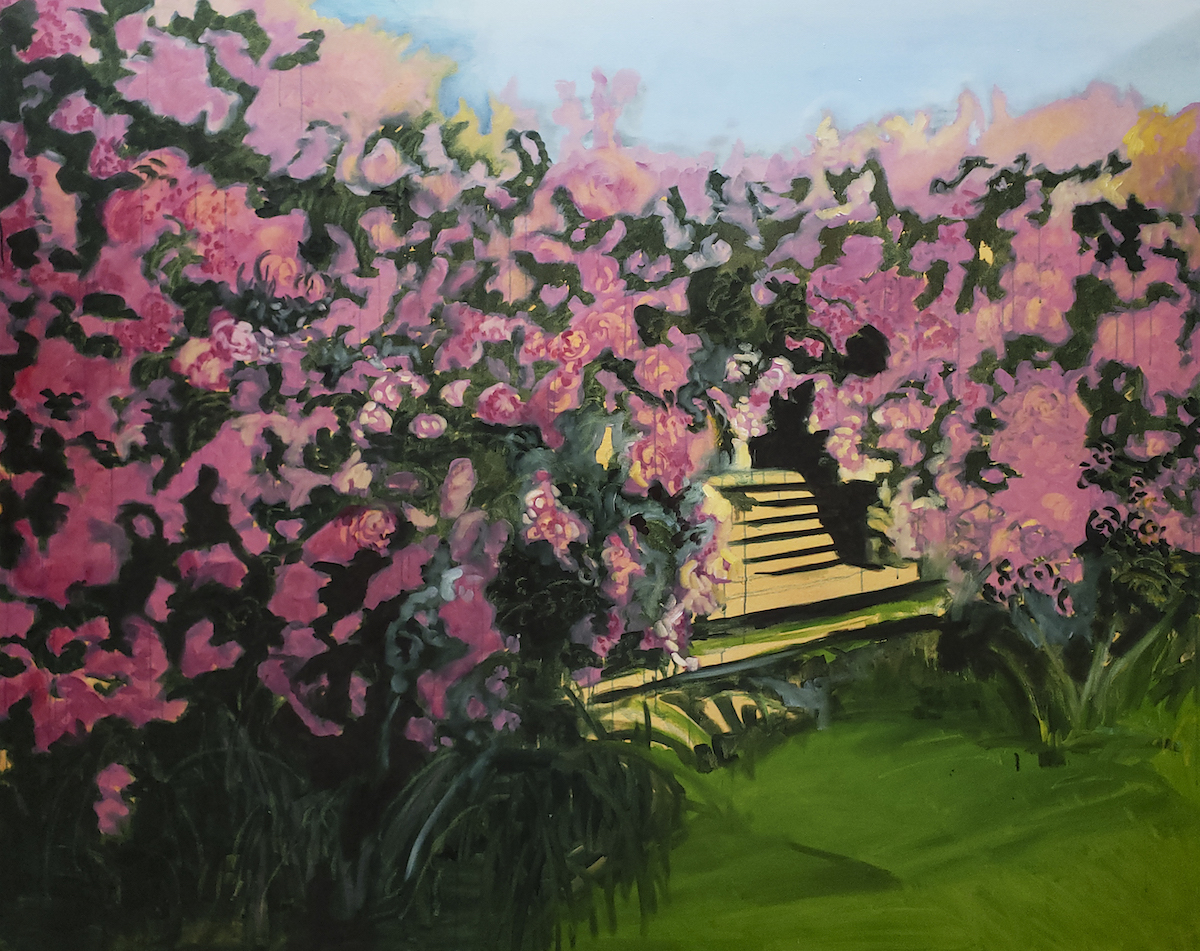 Image: Speaking of dislocation, and lost and regained places, do you think there’s such a thing as “diasporist art,” as the painter R.B. Kitaj suggested?

EO: I do, and it’s a very important element of contemporary artistic practice these days. I think it is the American art historian John Peffer who talks about how contemporary experience is diasporic because most of us either have a personal experience of recent migration (ourselves, our parents, or our grandparents) or else “culture” has migrated to us (as in the impact of globalization on people living on their ancestral lands).

In the work of contemporary artists of African diasporic backgrounds, in particular, it seems clear to me that there is a navigation of multiple identities or worldviews. There is a restlessness and unease that actually becomes quite productive, because it manifests as a curiosity that invites you to not take your own or others’ worldviews for granted. I think the diasporic artist has the capacity for a radical empathy. These artists make work that foregrounds their love for and desire for deeper connections to certain places and communities. I think it makes for work that is extremely compelling and reaches beyond ideological and other silos.

Image: What question do you find yourself struggling with most in your work? 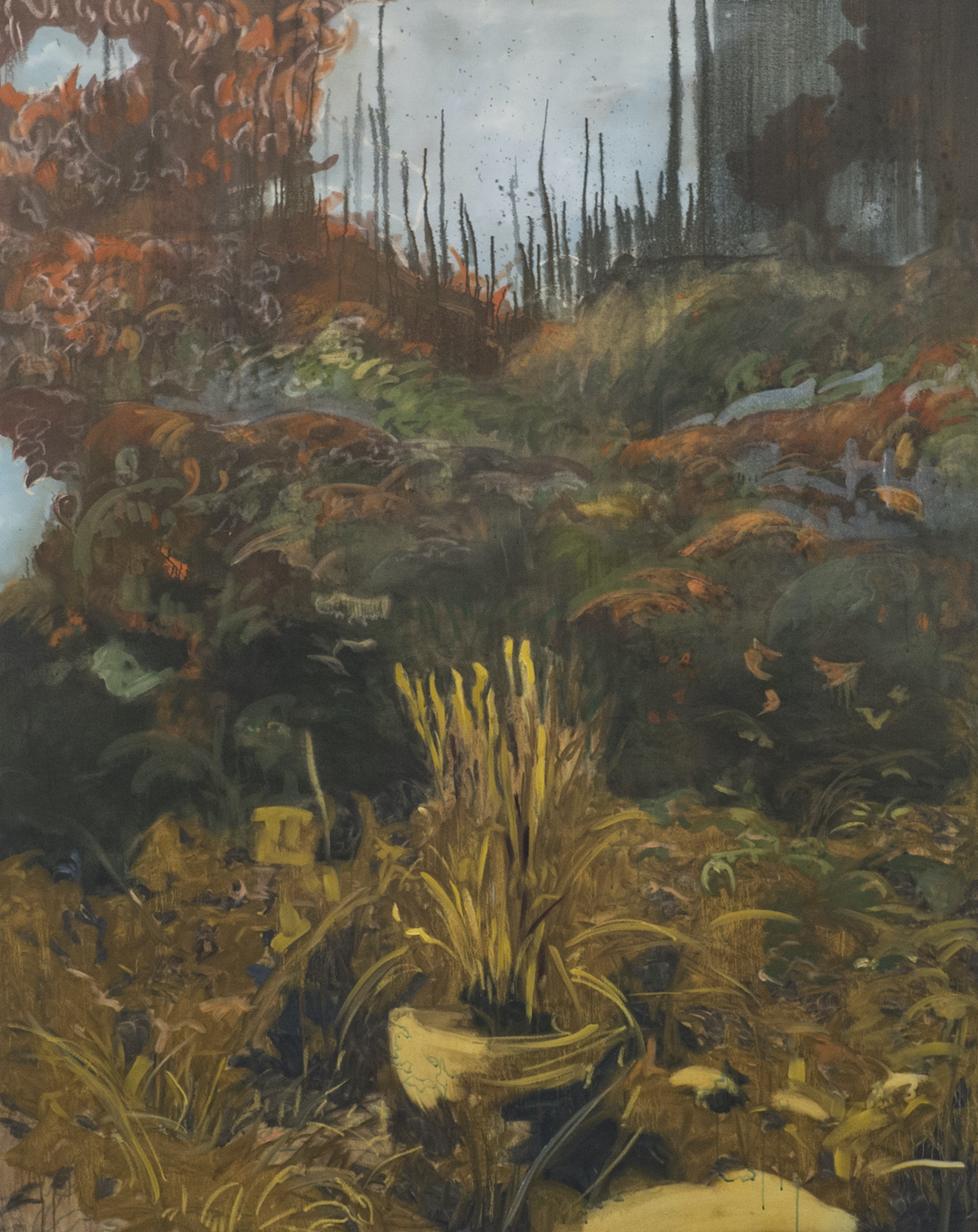 Image: You read a lot more theology than most artists I know. What theologians have your attention right now?

EO: I don’t know that I read a lot of theology, but I’ve been lucky to have close friends and family who do, and most of my theological understanding has come from conversations with them. Funny enough, recently I listened to James K.A. Smith’s On the Road with Saint Augustine as an audiobook in the studio while I worked. It was a revelation. I hadn’t known that Augustine was a brother, a fellow African! And the notion that his theology and practice were influenced by his diasporic personhood was fantastic to discover. I’m also a fan of Richard Rohr’s concept of “falling upward.” It invites a radical perspective that I don’t need to figure everything out but can trust that God is committed to me regardless of where I find myself. I find it challenging and never really know what to do with it most of the time, but I’m trying to make peace with that. 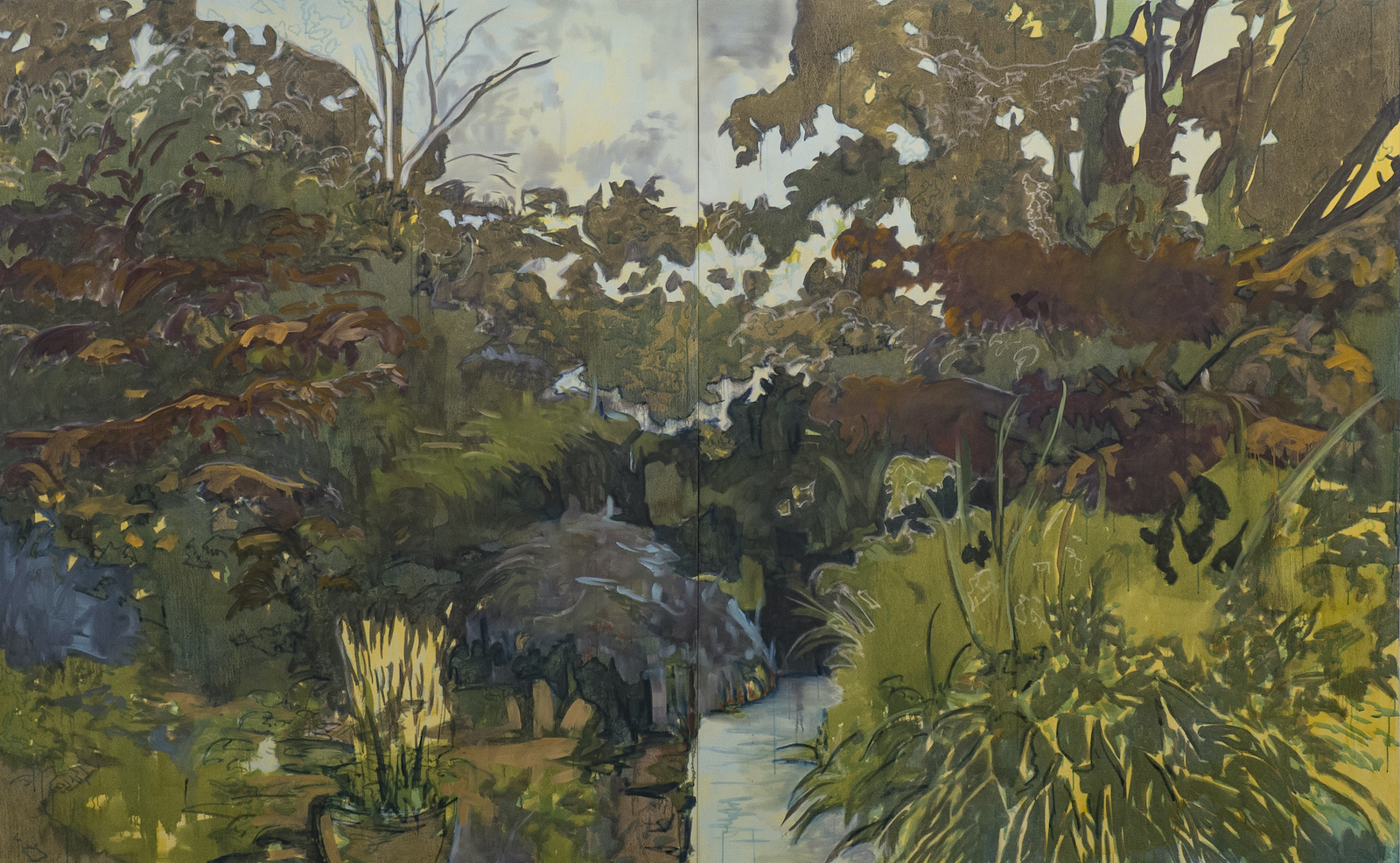 Image: Do you have a particular ritual when working in your studio, religious or not?

EO: Off the top of my head I would say no, but as I think about it, I’m always trying to be fully present when I’m in the studio, and depending on the season, I’ll use different strategies to get there. If it’s not too cold, I’ll walk to the studio and use that time as a way to focus my mind on being present to the making. Sometimes I’ll light a candle in the studio and sit still for a while. Other times, when I’ve got too much energy, I’ll turn up the music and throw myself into the work—Afrobeat usually does the trick. The studio is a special place, and being able to spend my time making is such a gift. In a way, the making is its own ritual. When you are fully in it, you are not really thinking about the news or other anxieties anymore. Making can be frustrating, but the process is thrilling, and often you end up on the other side with something that surprises you, and you can’t wait to get back to the studio. 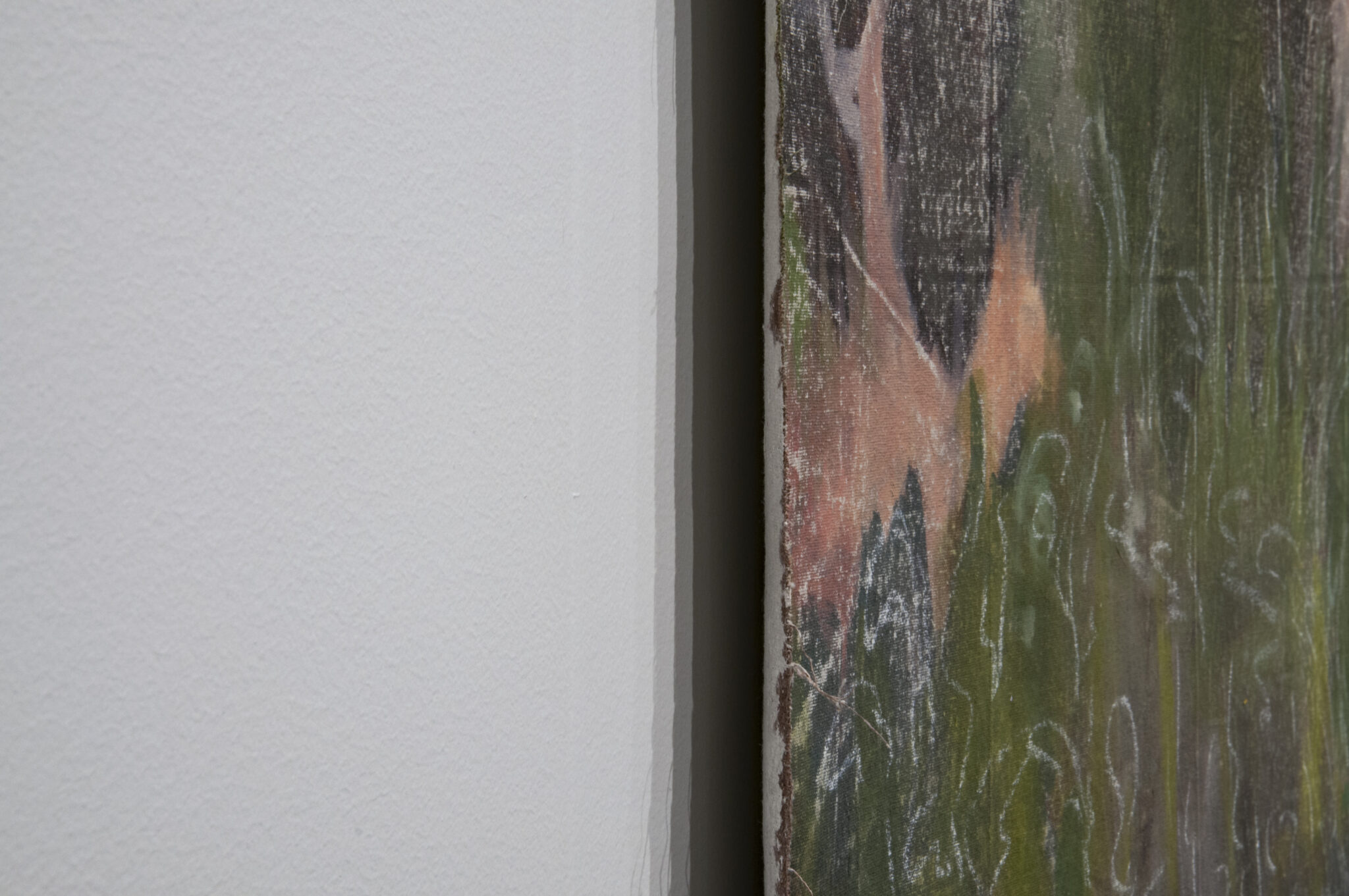 Emmanuel Osahor. I Have Been Thinking of My Mother’s Garden, (detail) 2021. Oil on  unstretched canvas. 96 x 68 inches.  Collection of the Art Gallery of Ontario.

Image: What has been the most surprising response that someone else has had to your work?

EO: I recently showed a painting titled Lilacs (for Farah) of a lilac bush set ablaze by the sun and enveloping a wooden bench. I was referencing a photograph I had taken in the University of Guelph Arboretum. I remember the colors of the sun-blasted lilacs were so enchanting, and their perfume was intoxicating. I could not bring myself to sit on the actual bench, because I was afraid I would pass out from sensory overload. When I showed the painting, many people commented that all they wanted to do was sit on the bench. They wished they could enter the painting and stay there. That was profound for me, because rarely does the viewer feel the exact same way the artist felt when making an image. I don’t want my work to be a one-to-one transcription of what I’m thinking. In fact, I am always hoping the paintings transform themselves and remain open for the viewer. But in this case it was a gift to see that the work was able to make an experience that I valued so palpable to other people. 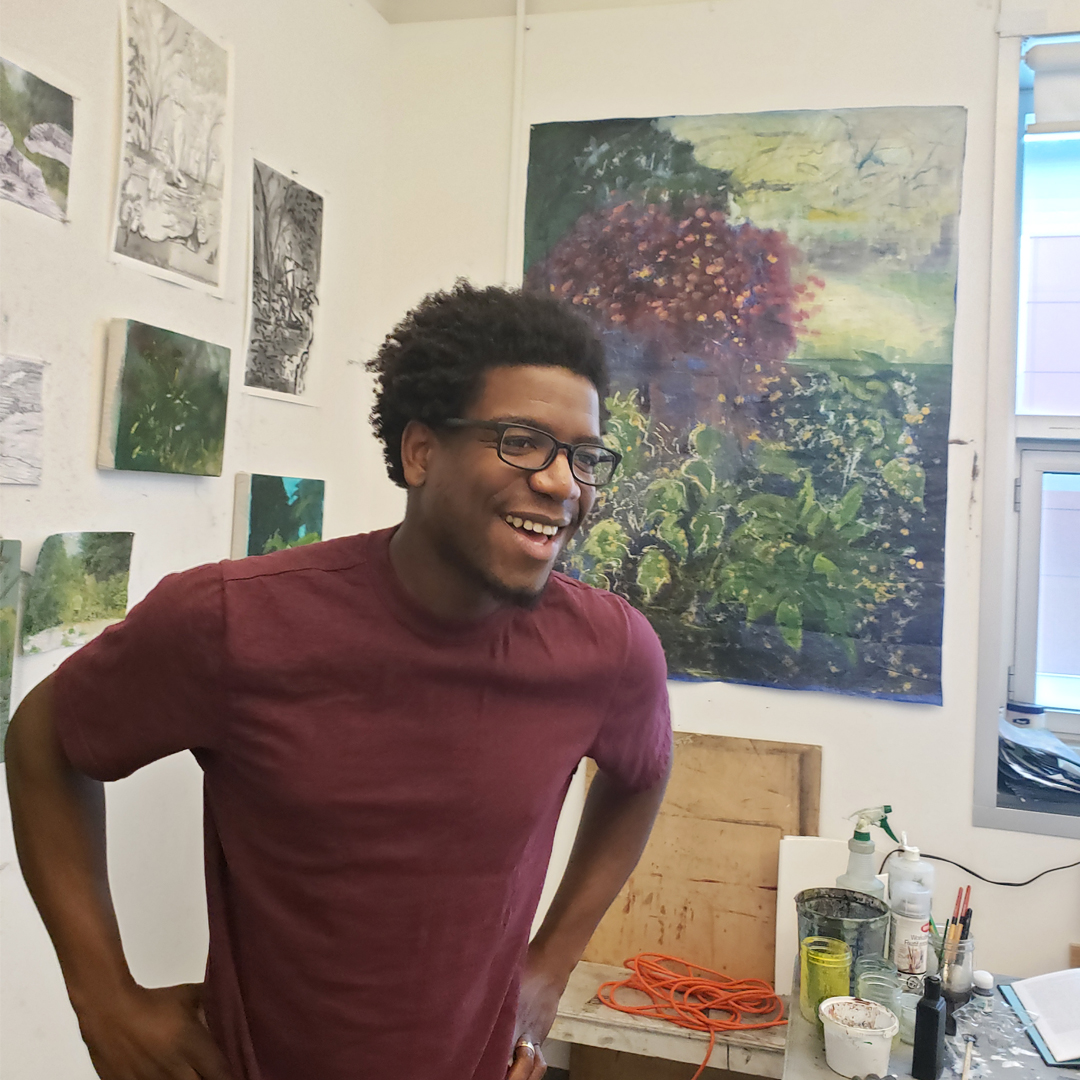 Tags: Emmanuel Osahor In the Studio