My father was an engineer, but the world of slide rules (it was a long time ago), logarithmic tables, and anything above the simplest math both baffled and tormented me. Geometry was the only mathematics course that I managed to perform respectably in. When I graduated, my school headmaster wrote to my parents that they “need not worry that Ted might amaze the world as a mathematician.” Modern art seemed comfortably distant from exacting computation and calculation.

I don’t believe my artistic interests have changed much since I described them in issue 40 of Image—but my processes have gotten more complex. The piece reproduced here, Dance, completed in 2017, is comprised of two hollowed-out apple stumps that are poised on a four-by-eight-foot sheet of hot-rolled steel. Their relationship is held in suspended animation by a twisting column of maple segments that springs from the interior of one stump and disappears into the other. At its highest point the twisting column stands about chest level. Behind this ensemble is a wall of luminous cold-rolled steel sheets. 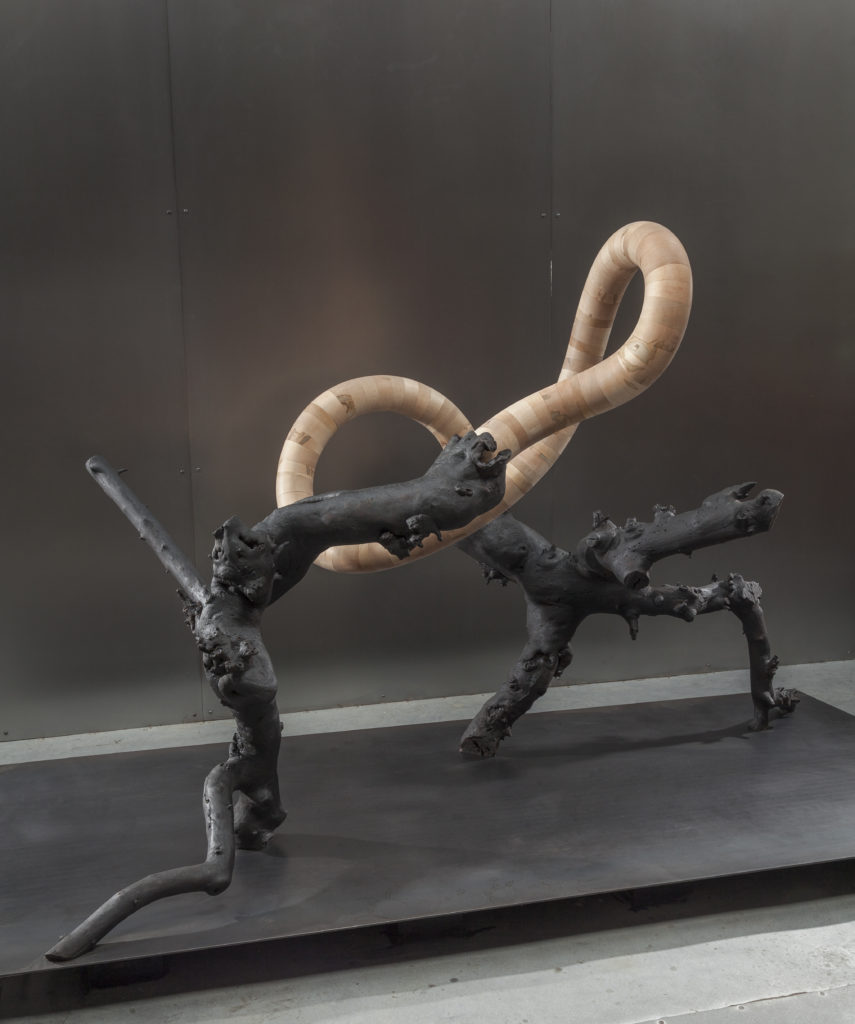 The dance is a recurring theme in art, with roots in antiquity. I found the apple forms to be evocative of that theme, suggesting related figural movements. But I needed something to physically balance, hold, and unite the “figures.” I once heard a friend describe her parents’ long partnership as being like a dance, and the segmented column gave me an image of being united through time, as well as providing stability. Around 2000, I began asking my engineering colleagues at Messiah College for advice on how to solve structural and technical problems. The person I most consistently consulted was Dr. Timothy Van Dyke. He has calculated wind loads and the stresses and failure points of joints in some of my public commissions. When I showed him a drawing of the column I wanted to make, he declared it an interesting problem and offered to calculate how to build it. Tim taught himself new ways to use a 3D CAD program and, after a couple of months, gave me five pages of exacting measurements and images on how to cut eighty-four wedge-shaped discs—each with a unique orientation. If made carefully, they would fit together around a steel spine I had fabricated. It took me and four assistants over four years to finish Dance—while also working on two commissions.

So what had happened? Artistic desire led me back to the world I thought I’d escaped—computation. But in the interim between my youth and “maturity,” the world has changed, and stunning new technologies—ones my father helped nurture in their infancy—offered me a way to enjoy the fruits of a knowledge I could never master. I’m grateful for all of those who opened that world to me.