Weird magic, it seems now, a spell to believe
in the candles crossed like swords
across your neck for the feast of Saint Blaise—

God preserve you, the priest intoned again
and again. We stood in line,
the whole school, as the white tapers

were pressed against each neck to ward off
sore throats, a lost voice, something
worse. Now, that life’s like an old black coat

I’ve unbuttoned and hung in the closet
and won’t ever wear again, though
I can’t quite give it away. I can still feel

my way back to the guilty thrill as I fingered
the crucifix on that worn rosary,
the thick cross with a little door on the back

closed tight with an even littler screw.
It held a relic, someone said—I remember that
hushed voice—a few specks of bone

from some forgotten saint’s shoulder or ankle,
something I had to see, those gray flecks
smaller than rice grains I stared at

in queasy wonder, tilting the cross
so they’d catch the light—a little, a little
more—until they slipped out and blew away. 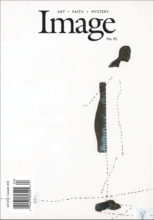