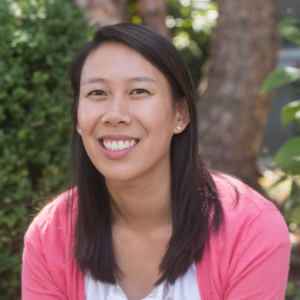 “I know / what it’s like to be hardened in the face of a miracle, for some / insane part of me to care only about checkboxes on a list…” This line in Ashley Wong’s poem “Post-Miracle,” published in Image issue 95, encapsulates the poet’s tension between compassion for the hardened, as well as an understanding of what they are missing. As a writing instructor who has taught both university students in Timor-Leste and middle schoolers in Boston, Ashley emphasizes that “her pedagogical vision is to train young people to think critically, creatively, and compassionately about themselves and the world around them.” Her poetry, published in Prairie Schooner, Crab Orchard Review, and Poetry International among other journals, reflects this vision in its ability to be compassionate with a critical eye.

Read “Post-Miracle” as it appears in Image issue 95.

Ashley Wong grew up in New Hampshire. As a second-generation Chinese American, she comes from a family of dentists and engineers and assumed she would follow suit. She discovered poetry, however, in boarding school at Milton Academy, and the textures of language became a means for her to explore her cultural identity as an Asian American, a part of her she had formerly disregarded.

She went on to earn a BA in English from Georgetown University, where she experienced a spiritual awakening through on-campus Bible studies with Asian Baptist Student Koinonia—a transformative time in her life, which inevitably found its way into her poems. As Ashley pursued an MFA at Boston University, her vision as a poet began to be inspired by Brother Lawrence’s The Practice of the Presence of God, with her poems striving to capture snapshots of life, spiritual realizations, moments of elation and moments of devastation, and the writing process, a way to connect with God.

After her MFA, Ashley received a Robert Pinsky Global Fellowship to travel abroad to Timor-Leste, a place of staggering mountains juxtaposed with postcard-worthy beaches, where stray roosters strut the streets and the hollow shells of bombed out buildings still scatter the city, remnants of Timor’s war-torn history. Ashley was drawn to the extremities the nation had suffered and hoped to bear witness to its fragile political condition. Ashley taught poetry at the National University of Timor-Leste in Dili, discovering the joy of sharing literature with nearly a hundred students, despite broken desks and poems printed on tiny pieces of paper because resources were so limited.

This experience in the classroom forged Ashley’s way into full-time teaching. She is currently an English teacher at The Meadowbrook School in Weston, Massachusetts, where she teaches sixth, seventh, and eighth grade, as well as an instructor at GrubStreet creative writing center in Boston. Her pedagogical vision is to train young people to think critically, creatively, and compassionately about themselves and the world around them. She loves reading Shakespeare with her students, giving them experimental writing exercises, and teaching them to place all clichés in a coffin.

Ashley’s poems have been published in Prairie Schooner, Image, Crab Orchard Review, Salamander, Poetry International, Fugue, and the 2011 Montreal Global Poetry Anthology. She and her husband Tim, a landscape architect, and their one-year old son live outside Boston, where they serve in the college ministry at Antioch Baptist Church in Cambridge. When she’s not teaching or writing or chasing her son around, she loves exploring wildlife sanctuaries and trying out new recipes from her favorite food blogs.

My writing ebbs and flows with the currents of life. There have been periods of intense writing, such as during my MFA program at Boston University or three summers ago when I attended the New York State Summer Writers’ Institute at Skidmore College and began numerous drafts that became the beginnings of future poems or when I returned from an RV trip through Alaska. There have also been periods of intensely experiencing life and processing that through prayer and meditation on the Word of God, rather than through writing poems. This past year of becoming a mother has been one of those periods of intensely living and growing as a person—experiences that very well may find their way into a poem one day. I have learned to embrace the slow-cooker poem that sometimes takes years to write because the experiences need time to be processed.

I have become increasingly interested in the form of a poem on the page and the visual arrangement of words to evoke meaning. Adding this visual layer to the experience of a poem has pushed my creative boundaries beyond content, diction, and sound, and consequently, I have been drawn to read more poems that catch my eye upon first glance.