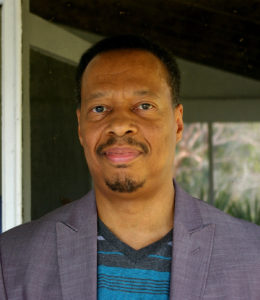 Claude Wilkinson’s poems tend to send us scurrying off to learn more about certain visual artists. The first poem of his we published in Image #76 is a meditation on a photo taken by Gordon Parks in Fort Scott, Kansas, in 1949, part of a series on African American neighborhood life intended for Life magazine but never published there. (They are beautiful, and you can see some of them here.) Wilkinson’s poem adds another layer to a photo of a death-bed scene with two mourners. Where photography freezes time, a poem can allow it to unspool. Wilkinson imagines what the flowers on the wallpaper have seen, the history of the room, and the thoughts of the bedside figures—the way death is opening a door that allows them a glimpse of the kingdom, figured as a fruiting tree. Not all Wilkinson’s poems are about painters and photographers, but his way of looking at the world seems informed by a long engagement with visual art. He dwells on the natural world in a way that always invites us to look beyond and through it, to assume that all we see—a tree full of egrets; a summer meadow; two rural characters swapping stories—has been arranged with a painter’s intention, for our benefit, to teach us something. His pace is unhurried, the observations unwind gracefully, but with gentle pressure, insisting: look here.

You can read his poems “Early Morning on the B Line…” and “Meadow Flowers (Goldenrod and Wild Aster)” in Issue 95 and online.

Claude Wilkinson is a critic, essayist, painter, and poet. His criticism has explored such diverse artists and authors as photographers Maude Schuyler Clay and James Van Der Zee, fiction writers Chinua Achebe, John Cheever, and Flannery O’Connor, playwright Charles Fuller, and poet Etheridge Knight, among others. In 1993, exhibition juror, James L. Seawright, Jr., Director of the Visual Arts Program at Princeton University, chose Wilkinson’s work to receive the W. M. Whittington, Jr. Purchase Award. And in 1995, as one of six prominent cultural institutions invited to identify leading emerging artists, The African American Museum in Dallas, Texas, recommended Wilkinson for a figurative painting commission in the House of Seagram’s Perspectives in African American Art ’96 program. For three decades now, his paintings have been exhibited nationwide in numerous invitational, juried, and solo shows. His poetry collections include Reading the Earth, winner of the Naomi Long Madgett Poetry Award, and Joy in the Morning, which was nominated for an American Book Award, the Griffin Poetry Prize, and a Pulitzer Prize. Other honors for his poetry include a Walter E. Dakin Fellowship and the Whiting Writers’ Award.

My new collection of poems titled Marvelous Light will be published by Stephen F. Austin State University Press in September 2018. The poems oftentimes reference specific works of art as I imagine them having a kind of seasonal import for apprehending our stages of life. Of course, also within the poems’ overarching theme is an attempt to discover divinity’s role in the creative process. I am also completing another manuscript of poems currently titled “World without End,” whose theme is rooted in the seemingly infinite spiritual implications woven throughout our natural world experiences.

My current scholarly pursuits include exploring aspects of cultural representation in contemporary Southern photography, as well as my interest in ideologies of elitism and separatism that were prevalent in the political aesthetic of the Black Arts Movement in the 1960s.

For the past several years, I also have been working on three groupings of paintings—scenes from the delta and hill country of Mississippi, which is currently my physical home; scenes from New England, which I consider to be my spiritual home; and scenes from world travels, in which European gardens are frequently my center of interest. Once I have finished several writing projects that are in progress, I hope to devote a significant amount of time solely to painting.