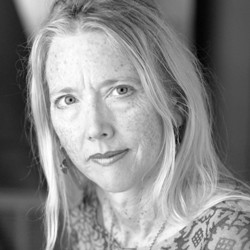 Part psychologist, part mystic, in her poems Lisa Russ Spaar offers a beautiful and compelling portrait of the mind at prayer. An ongoing series of poems explores the imagined insomnia of various historic and literary figures, from Thomas Merton and Hildegard von Bingen to Virginia Woolf and Franz Mesmer—using sleeplessness as a way of investigating, among other things, the soul straining upward in the dark. In a way that theology or personal essay never could, the insomnia poems offer a frank and nuanced picture of our laboring toward transcendence, our grief and longing over our distance from our maker, but also our love for the world with which we are so marvelously entangled. Her poems luxuriate in beautiful language, and pulsate with rich, sensory life, but they’re also modest in temperament; they replicate the place-bound, idiosyncratic, sometimes comic rhythms of real thought, as it moves between the transcendent and the here-and-now. Her themes are love, sorrow, literature, night, ecstasy, household life, the heavens, and the natural world—and she explores them with a meditative and patient grace, and often with unabashed sexiness. Her poems honor the humble, concrete life of things, the passionate life of the body, and find within them the beginnings of an answer to their theological longings. Spaar is also a generous and perceptive reader of poetry and a talented reviewer and interviewer.

Lisa Russ Spaar is the author of Satin Cash: Poems (Persea, 2008), Blue Venus: Poems(Persea, 2004) and Glass Town: Poems (Red Hen, 1999), for which she received a Rona Jaffe Award for Emerging Women Writers in 2000. Twelve of her poems appear in Exquisite History: The Land of Wandering: Poems & Prints (The Printmakers Left, University of Virginia, 2005) and numerous anthologies, most recently in Best American Poetry 2008. She is the author of two chapbooks of poems, Blind Boy on Skates (Trilobite/University of North Texas, 1988) andCellar (Alderman Press/University of Virginia, 1983), and is editor of Acquainted With the Night: Insomnia Poems (Columbia, 1999) and All That Mighty Heart: London Poems(University of Virginia, 2008). A new collection of poems, Vanitas, Rough, will appear from Persea in fall 2012. Her work has appeared in many literary quarterlies and journals, includingDenver Quarterly, Image, Kenyon Review, Paris Review, Ploughshares, Poetry, Slate,Shenandoah, Southwest Review, Virginia Quarterly Review, Yale Review, and elsewhere. The recipient of awards from the Academy of American Poets and the Virginia Commission for the Arts, Spaar is the founder and Director of the Area Program in Poetry Writing at the University of Virginia, where she is Professor of English, an Advising Fellow, and the winner of an All-University Teaching Award (2009), a Harrison Award for Undergraduate Advising, and a Mead Honored Faculty Award. She was awarded a Guggenheim Fellowship for 2009-2010, the 2009 Library of Virginia Award for Poetry, and a 2010 Outstanding Faculty Award of the State Council of Higher Education for Virginia, and the Carole Weinstein Poetry Award for 2011. She serves as poetry editor for the Arts & Academe feature of the Chronicle of Higher Education.

It is a Friday morning in late August, and I am on the cusp of a new academic year. In an hour, I’ll attend a meeting. Tomorrow I’ll walk the dog, shop for groceries, and visit with my youngest daughter, home for just a few more weeks before she returns to her studies. I’ll drag a sprinkler hose around my beds of black-eyed susans, roses, and tattered phlox, and shake around some granulated bobcat urine (where does this really come from?) in a farcical attempt to keep at bay the local herd of deer. To prepare for courses I’ll commence teaching next week and for the poetry commentary I write for the Chronicle of Higher Education, I’ll be re-reading Anne Carson’s Eros, the Bittersweet, John Ashbery’s recent translations of Rimbaud, and new poems by Jane Hirshfield. On Sunday I’ll wake early, read the Lectionary page, and then head out to the country to spend time with my aging parents, an experience that has become my practice of Sunday worship for the past several years since my mother’s dementia has worsened and both parents have battled cancer. This week’s visit will involve turning into sauce and canning several baskets of Roma tomatoes. This is a long way of saying that my writing endeavors in any moment are shaped by the privilege of attending to this rich mix of what I am reading, watching, hearing, doing. My “current project” is always to try to pay attention. Gerard Manley Hopkins once wrote, “What you look hard at seems to look hard at you.” If I’m lucky, that’s true for whatever I’m writing – new poems, revisions, e-mails, essays, reviews, or statements about “current projects!” As Charles Wright puts it in “Looking Around,” “Proper attention is our refuge now, our perch and our praise.”