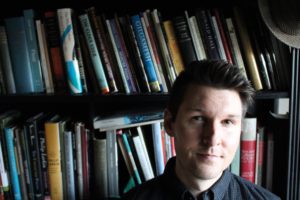 Beginning many poems with a scriptural epigraph, as he did for his latest poem in Image, Michael Shewmaker fleshes story from line. Shewmaker’s poetry dwells on words and their character, manifesting in a grander creation of character by such obsession. In his work, one meets a variety of personas, each one of whom is compelling. The sound of his writing draws readers in—“Their shorn heads shined like gourds,” he writes of listeners in the Children’s Ward—but it is his form and content—his natural enjambment and wrestling with the stillness of dark—that keeps readers reading. And it keeps us here at Image excited for the born Texan’s current project: a beast of a book-length poem, a leviathan.

Right now I’m working on a book-length poem tentatively titled Leviathan. It’s a sort of modern reimagining of The Book of Job set in East Texas. My version of Job is the grandson of a wealthy wildcatter, so he’s been raised on old oil money. I’m not sure how the idea came about, but I’ve been fascinated by the original book for as long as I can remember. It’s one of the first stories that made me ask some of the hard questions. It still haunts me. Writing the poem, then, is a way for me to confront that. I also became quickly obsessed with how Christ might occupy the mind of a Job who is alive and suffering today, especially if today’s Job was raised in, say, a Southern Baptist church. (The Old Testament Job, of course, didn’t have the figure of Christ yet to lean on.) As much as I love the original, the characters also read like cardboard archetypes to me. I wondered if I might be able to breath some life into them (the old flaw: Imago Dei). So, unsurprisingly, the poem is becoming increasingly about Texas and the people I grew up with and around. I hope it confronts a lot more than what I’ve led on here, but these are some of the initial tensions that interested me and continue to call me back to the page.

I’m also writing shorter poems as they come, but I’ve never been one to split my attention very well, so they show up rarely and often result in a distracted mess. I do have a handful, though, that I hope will serve as the foundation for my next collection. I try not to think about it too much. I’m a big believer in keeping myself in the dark and writing the poems on their terms—one at a time—and trusting that the book will emerge naturally out of that process.