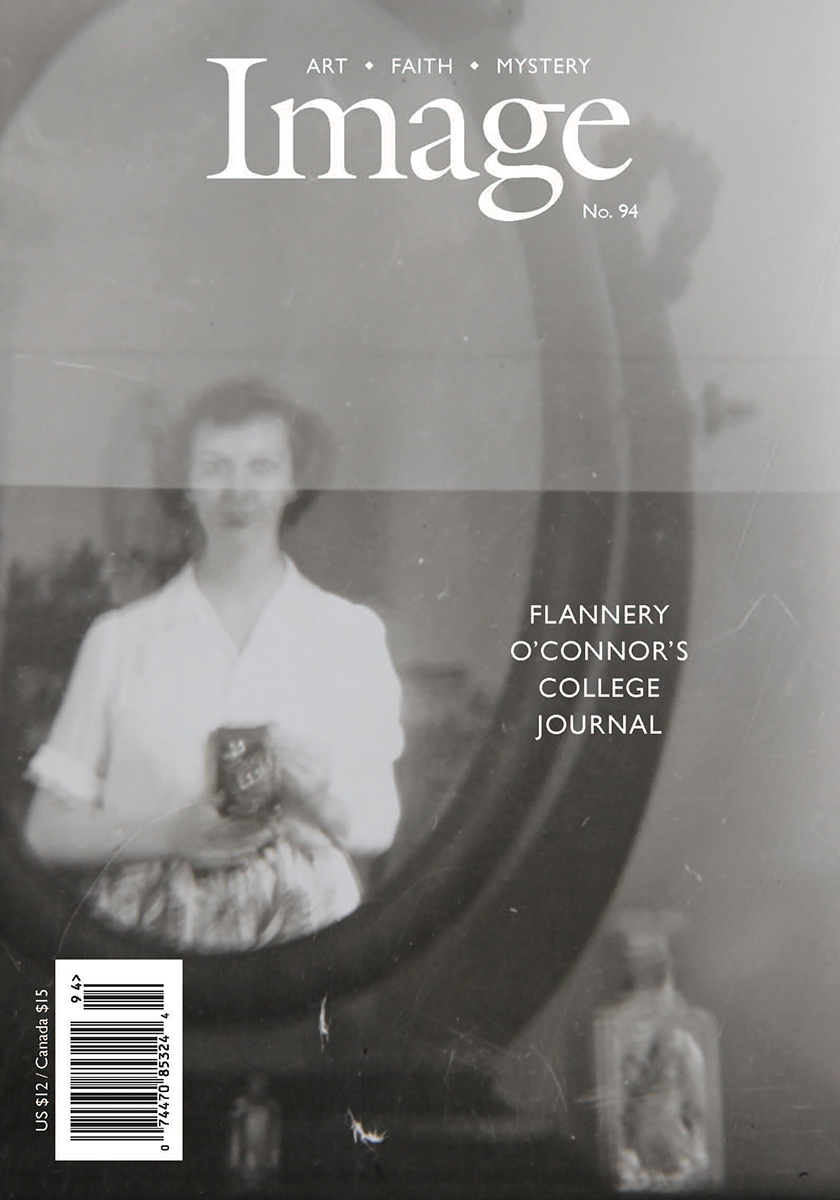 THIS NOVEMBER, IMAGE, the influential quarterly journal of art and faith, will become the exclusive publisher of a college journal kept by one of the canonical writers of American literature, Flannery O’Connor.

For a limited time, Image is celebrating this remarkable literary event by offering 25% off new personal subscriptions. Order by October 22 and your subscription will include the O’Connor issue.

Order Now and Save

Written when she was eighteen years old, the journal reveals the same intelligence, humor, and earnest faith one encounters in her letters, as well as the beginnings of the fearsome intellect found in her stories and essays. Her self-deprecating humor, loyalty and love of her family, and her yearning to become a literary success are all in evidence.

Published by arrangement with O’Connor’s estate, the journal is prefaced with a short introduction by Jesuit scholar Mark Bosco, who has recently completed a documentary on her life. The issue will also include several previously unpublished photos, including a self-portrait photo taken through her dresser mirror.

O’Connor lived from 1925 to 1964, almost entirely in the state of Georgia. Her three short story collections and two novels are, taken together, a landmark of twentieth-century American fiction. Her comic, harrowing, and often shockingly violent stories grapple with mystery at the heart of faith without sentimentality or didacticism. She saw herself as a religious writer working in a secular age, and in her own words: “to the hard of hearing you shout, and for the almost blind you draw large and startling figures.”

With her trademark wit already in evidence, the eighteen-year-old O’Connor entitled her college journal “Higher Mathematics.” In it she keeps a daily record of her thoughts, dreams, amusements, and fears for a period of forty days. She is conscious of her powerful literary and intellectual gifts, yet anxious about whether they will come to anything. The entries contain a range of reflections, from a critique of contemporary social science and the dullness of many of her college classes, to close observations of domestic life with her mother and extended family, to the disciplines she is already practicing as a writer. Her longing for sophistication and love is balanced by a deep loyalty and affection for the people near her. She is equal parts satire and warmth. Her characteristic voice is present throughout: alternately mordant, skeptical, spiritual, and funny.

Jan. 11, ’44. If I should begin to feel sorry for myself—however erroneously—I could easily move myself to a liquid-eyed condition, and that would be disastrous. I have such an affection for myself. It is second only to the one I have for Regina [her mother]. No one else approaches it. I realize that joyfully just now. If I loved anyone as much or more than myself and he were to leave, I would be too unhappy to want myself to advance; as it is, I look forward to many profitable hours. I have so much to do that it scares me.

Why is Flannery O’Connor’s work important to Image journal?

When Image was founded in 1989, the editors wanted to publish a quarterly that would explore the relationship between art and faith. We had seen plenty of bad examples of that—work that was preachy or sentimental and artistically sub-par. Against all that, Flannery O’Connor stood as a beacon for us. She was an artist of the highest caliber, read and appreciated by the larger culture, including those who did not share her religious commitments. We not only loved her fiction but also admired the balanced, insightful Christian literary aesthetic she formulates in the essays collected in Mystery and Manners. So we’ve always referred to her as one of Image’s patron saints.

How did you acquire the permission to print these journal entries?

A few years ago Image’s editor, Greg Wolfe, delivered the Newman Lecture at Loyola University in Chicago, at the invitation of Fr. Mark Bosco, SJ, who was at that time the director of the Hank Center for the Catholic Intellectual Heritage. Fr. Bosco was then in the process of completing a documentary about O’Connor’s life and work. As it happened, his colleague Fr. Michael Garanzini, then President of Loyola, had also been named a trustee of the O’Connor Estate. In doing research at Emory University, Fr. Bosco had come across O’Connor’s college journal—a hand-written document few scholars knew about, which she facetious nicknamed “Higher Mathematics”—and he felt that Image would be the ideal venue for it, as both a nationally recognized literary quarterly and a place that calls O’Connor a patron saint. So he made the proposal and the Trust accepted it.

What do you hope this will convey to Image readers?

Why are we interested in the biographical details of the great artists? Because we hope to find some insight into the way an artist transmutes the realities of everyday life—from personal relationships and experiences all the way up to the highest philosophical and intellectual concepts—into the stuff of art. That why letters, diaries, journals, and such are a treasure trove. O’Connor was a precocious student, extraordinarily brilliant and widely read. Her college journal provides glimpses of her development as a writer and thinker, from her budding sense of humor—dry and wryly observant—to her early awareness of her vocation to the writing life, with all the struggles and sacrifices it would entail, to her growing sense of how her theological viewpoint would enable her to shed light on an increasingly secular culture. “Higher Mathematics” offers us all a rare peek into the mind and heart of one of the greatest writers of the twentieth century and a staple of the American literary canon.

Don’t miss out on this rare literary moment. Subscribe now and save 25% before the limited-time offer ends.

Order Now and Save