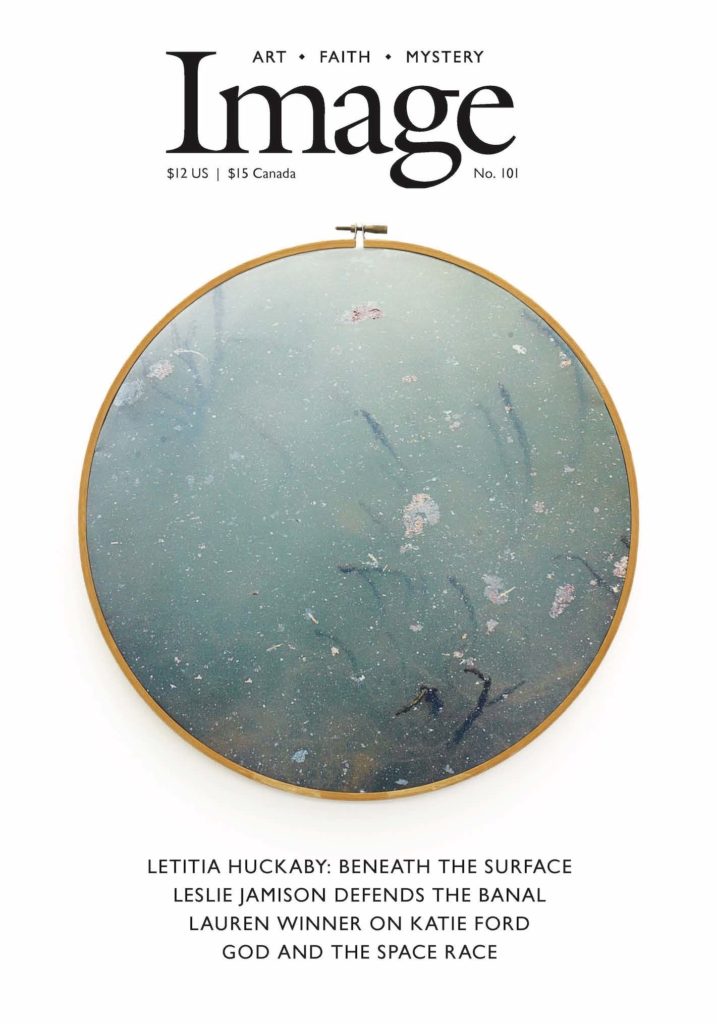 The cover features photographer and fabric artist Letitia Huckaby. Inside, you’ll find: James K.A. Smith on Carolyn Forché; an interview with Leslie Jamison on getting clean, Hilma af Klint, and the upside of shame; Daniel Domig on the roots of painting; fiction by Vedran Husic on the last days of one of the assassins of Archduke Ferdinand; Matt Milliner on the secret meaning of bourbon distillation; Adam Roberts on the space race and the search for God.

Eric Pankey, The Depths of August; The Taking of Christ

Paul Mariani, In the Realm of Kings and Queens; They Too Go Round

Robert Cording, Acts of Attention: On Poetry and Spirituality

Farah Ali is from Karachi, Pakistan. Her poems have appeared in Versal and Glass: A Journal of Poetry, and her short fiction in Shenandoah, Copper Nickel, and elsewhere. Her awards include a Pushcart Prize. Her collection of stories, People Want to Live (New Rivers) will be out in 2020.

Dick Allen (1939–2017) was variously known as a mystical poet, a poet of history, of science, and of Zen Buddhism. His eclectic style ranged from formal to free verse. In his later years he often wrote in a hybrid narrative-lyric form of his own invention that he called “Randomism.”

Heather Christle is the author of four poetry collections, most recently Heliopause (Wesleyan). Her first work of nonfiction, The Crying Book (Catapult) will be out in November.

Katharine Coles’s most recent books are a memoir, Look Both Ways (Turtle Point), and a collection of poems, Wayward (Red Hen). She has received awards from the NEA, NSF, and NEH, as well as from the Guggenheim Foundation.

Robert Cording has published eight collections of poems, recently including A Word in My Mouth (Wipf and Stock) and Only So Far (CavanKerry). A new book, Without My Asking, is due out this year. Recent poems have appeared in the Georgia Review, Image,Southern Review, Hudson Review, New Ohio Review, and Best American Poetry 2018.

William Virgil Davis’s most recent book is Dismantlements of Silence: Poems Selected and New (Texas Review). His first book, One Way to Reconstruct the Scene, won the Yale Series of Younger Poets Prize.

Daniel Domig studied painting at the fine arts academy in Vienna, Austria, where he now lives with his family. His work has been shown at Diana Lowenstein Gallery in Miami, 33 Orchard in New York, the Austrian Cultural Forum in New York, Lentos Kunstmuseum in Linz, the Kunsthalle in Vienna, and Unttld Contemporary, also in Vienna.

Katie Ford is the author of Deposition, Colosseum, Blood Lyrics, and If You Have to Go (all from Graywolf). She is the recipient of a Lannan Literary Fellowship and the Levis Reading Prize and teaches creative writing at the University of California, Riverside.

Amelia Franz earned her MA in creative writing from Texas A&M University and has published short stories in the Texas Review, Oyster Boy Review, and other magazines. She lives in the Baltimore area and works as a freelance copywriter.

Jane Galin is a writer of poems and essays. She lives in Portland, Oregon.

Lawan Glasscock serves as executive director of Christians in the Visual Arts. She embraces visual culture through an anthropological and Christian lens.

Ashley Mace Havird, current poet laureate of Caddo Parish, Louisiana, has published three collections of poems, including The Garden of the Fugitives (Texas Review), which won the X.J. Kennedy Prize. Her poems have appeared in Shenandoah, Southern Review, and Crab Orchard Review. Her debut novel is Lightningstruck (Mercer).

Vedran Husic´ was born in Bosnia and Herzegovina and raised in Germany and the United States. His collection of stories, Basements and Other Museums (Black Lawrence), won the St. Lawrence Book Award. He has received fellowships from the Virginia G. Piper Center, the Fine Arts Work Center in Provincetown, and the NEA.

L.S. Klatt is the author of four poetry collections, including The Wilderness After Which (Otis). His essay “Blue Buzz, Blue Guitar: Wallace Stevens and the Poetics of Noisemaking” was published recently in the Georgia Review.

Daniel Kraft is a writer and educator who lives in Memphis, Tennessee. A graduate of St. John’s College Annapolis, he holds a master’s in Jewish studies from Harvard Divinity School.

Heather Lanier is the author of two poetry chapbooks, The Story You Tell Yourself (Kent) and Heart-Shaped Bed in Hiroshima (Standing Rock Cultural Arts). Her memoir about raising her daughter is forthcoming from Penguin Press.

Paul Mariani is University Professor of English emeritus at Boston College. His eighteen books include biographies of William Carlos Williams, John Berryman, Gerard Manley Hopkins, and Wallace Stevens, and the poetry collections Epitaphs for the Journey (Wipf and Stock) and Thirty Days: On Retreat with the Exercises of St. Ignatius (Penguin).

Matthew Milliner is associate professor of art history at Wheaton College. He has a PhD in Byzantine art history and is increasingly interested in the indigenous and vernacular cultures of his native United States.

Eric Pankey is the author of many collection of poems, most recently Augury (Milkweed). He is the Heritage Chair in Writing at George Mason University.

Adam Roberts is a professor of nineteenth-century literature and culture at Royal Holloway, University of London, and the author of twenty science fiction novels. He was four years old when Armstrong walked on the moon, but, to his regret, has no direct memory of that moment.