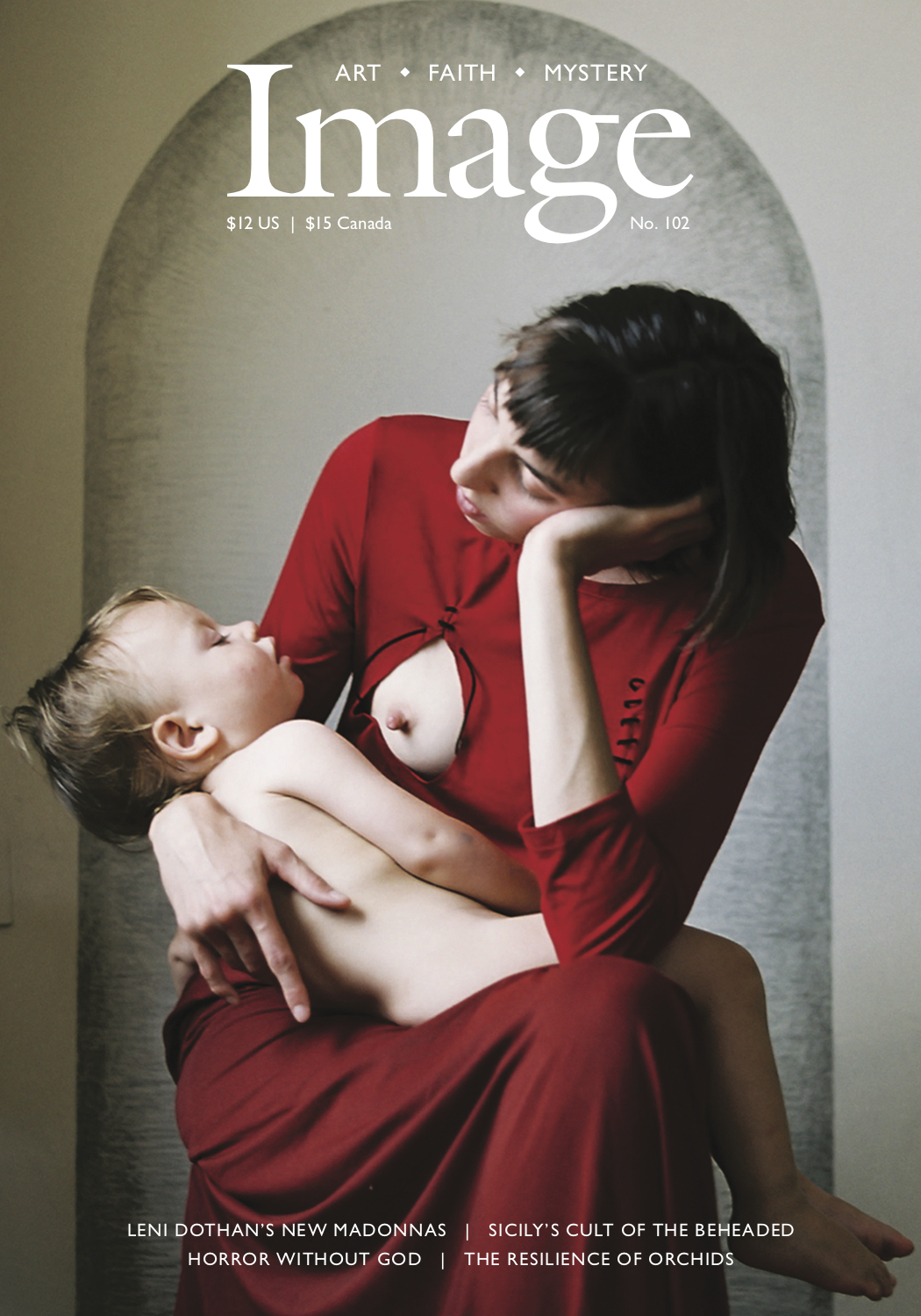 Image Issue 102 is the first issue to fully showcase the work of our new editorial team. We think you’ll notice some differences in style that still honor the best of what the journal has always been.

The cover features the work of Israeli artist Leni Dothan, whose photo essay responds to art-historical images of the Madonna and Child. We’re also introducing two new recurring features dreamed up by art editor Aaron Rosen: “In the Studio,” this time with eminent Bahamian sculptor Antonius Roberts, and “Curator’s Corner,” with Eva Fischer-Hausdorf of the Bremen Kunsthalle. Inside you’ll also find: flash fiction by Ed Falco on the resilience of orchids—and humans. Elizabeth Harper on the Sicilian Catholic folk tradition of the Cult of the Beheaded. Heather Burtman on what she learned about God while interning as a hospital chaplain. Nick Ripatrazone on horror films that don’t believe in God. Katrina Vandenberg on the strange phenomenon of jam. Art advisor Nausikaa El-Mecky asks: can acts of destruction also be works of art? Plus an interview with novelist William Giraldi, poetry by Robert Fernandez, Christopher Howell, Elena Karina Byrne, and more.

James K.A. Smith, Editorial: Besides, Before, Beyond Beauty

Robert Fernandez, Rabies and Angels (Love in a Hopeless Place); Danny and Newt

Sarah Gridley, Custody of the Eyes

Susan Rich Tonight, I Travel Back to Allston Street

Gabriel Fine, What Was Promised

Michael Bazzett, Things to Think about While Shaving; I Had a Little Trouble Believing in God

Matthew Robb Brown, The Givenness of the Oak Leaves

Antonius Roberts, In the Studio

Elizabeth Harper, The Cult of the Beheaded

Michael Bazzett’s poems have appeared in The Sun, Tin House, Ploughshares, and American Poetry Review. He is the author of three collections of poetry, and his recent verse translation of the Mayan creation epic, The Popol Vuh (Milkweed), was named one of 2018’s ten best books of poetry by the New York Times.

Heather Burtman, originally from Wisconsin and Ontario, is a master’s student at Yale Divinity School. You can find more of her work in Letters and the New York Times Modern Love section.

Elena Karina Byrne’s fourth book, Phantom Limbs, is forthcoming from Omnidawn in 2021. She is a freelance editor; poetry consultant and moderator for the Los Angeles Times Festival of Books; and literary programs director for the Ruskin Art Club.

Richard Cole has published two books of poetry: The Glass Children (Georgia) and Success Stories (Limestone). He is also the author of a memoir, Catholic by Choice (Loyola). www.richard-cole.net

Leni Dothan is an Israeli-born artist and architect based in London. She holds a degree in architecture from the Bezalel Academy of Art & Design in Jerusalem and an MFA and PhD from the Slade School of Fine Arts at University College London.

Jehanne Dubrow is the author of seven poetry collections, most recently American Samizdat (Diode), and a book of nonfiction, throughsmoke (New Rivers). She is a professor of creative writing at the University of North Texas.

Robert Fernandez is the author, most recently, of Scarecrow (Wesleyan). He lives in Lincoln, Nebraska.

Gabriel Fine is a writer and poet from Colorado currently living in Brooklyn. He has received support from the Fine Arts Work Center in Provincetown, and his nonfiction has appeared in Spin and the Los Angeles Review of Books. “What Was Promised” is his first published poem.

Eva Fischer-Hausdorf is curator of modern and contemporary art at Kunsthalle Bremen. She has recently organized shows including the site-specific installation Nachwirkung by Thomas Hirschhorn, a show on the French avant-garde film Last Year in Marienbad, and Max Beckmann: The World as a Stage.

Sarah Gridley is an associate professor of English at Case Western Reserve. Her poetry collections include Weather Eye Open, Green is the Orator (both from California), and Loom (Omnidawn). Her awards include the 2019 Green Rose Prize, the 2018 Cecil Hemley Award, and the 2019 Writer Magazine/Emily Dickinson Award from the Poetry Society of America.

Elizabeth Harper’s essays and photographs have appeared in Slate, Lapham’s Quarterly, Hazlitt, and the Metropolitan Museum of Art’s catalogue for Like Life: Sculpture, Color, and the Body. Read more at allthesaintsyoushouldknow.com.

Christopher Howell’s twelfth collection of poems, The Grief of a Happy Life, is forthcoming from the University of Washington Press. He teaches in the MFA program at Eastern Washington University and lives with his family in Spokane.

Roxane Beth Johnson is the author of Black Crow Dress (Alice James) and Jubilee (Anhinga). Her poems have appeared in The Pushcart Prize, Harvard Review, Georgia Review, and elsewhere.

Shara Lessley is the author of The Explosive Expert’s Wife (Wisconsin) and Two-Headed Nightingale (New Issues), and coeditor of The Poem’s Country: Place & Poetic Practice (Pleiades). Her awards include NEA and Stegner Fellowships. She was the inaugural Anne Spencer Poet-in-Residence at Randolph College and serves as assistant poetry editor for Acre Books.

Marty Newman is a student of archaeology, history, and kabbala. Born in Czechoslovakia in 1948, raised in Montreal, and educated at McGill University, he moved to Jerusalem in 1985 to study source texts in their original languages. The modern poets who influence him most are Zbigniew Herbert and Richard Wilbur.

Susan Rich’s fifth book of poetry, Gallery of Postcards and Maps: New and Selected Poems is forthcoming from Salmon Press. Her other books include Cloud Pharmacy and The Alchemist’s Kitchen (both from White Pine). She has received an Artist Trust Fellowship, Fulbright Fellowship to South Africa, and a PEN USA Award.

Nick Ripatrazone is Image’s culture editor and author of the forthcoming Longing for an Absent God (Fortress), a collection of essays on lapsed Catholic writers.

Antonius Roberts is one of the most eminent artists in the Bahamas. Born in 1958 in Nassau, he received his BFA in painting from the Philadelphia College of Art (now the University of the Arts). Passionate about preserving Bahamian and African heritage, he played a leading role in the restoration of the Villa Doyle as the National Art Gallery of the Bahamas.

Lauren Slaughter is the recipient of a Rona Jaffe Foundation Writers’ Award and author of a lesson in smallness (National Poetry Review). Recent work appears in New South, Pleiades, and  Four Way Review. She is editor in chief of Nelle, a literary journal that publishes writing by women. More at www.laurenslaughter.com.

Andrew Sorokowski was born in Hartford, Connecticut, and grew up in San Francisco. He has worked as a writer, researcher, teacher, and editor. His translations of the Ukrainian poet Natalka Bilotserkivets have appeared in Subprimal Poetry Art and Peacock.

Katrina Vandenberg is the author of two books of poems, The Alphabet Not Unlike the World and Atlas (both from Milkweed). She is an associate professor at Hamline University, where she also serves as poetry editor for Water~Stone Review.

Frances Wood is a current MFA candidate in poetry at Columbia University. She lives in East Harlem with her family.