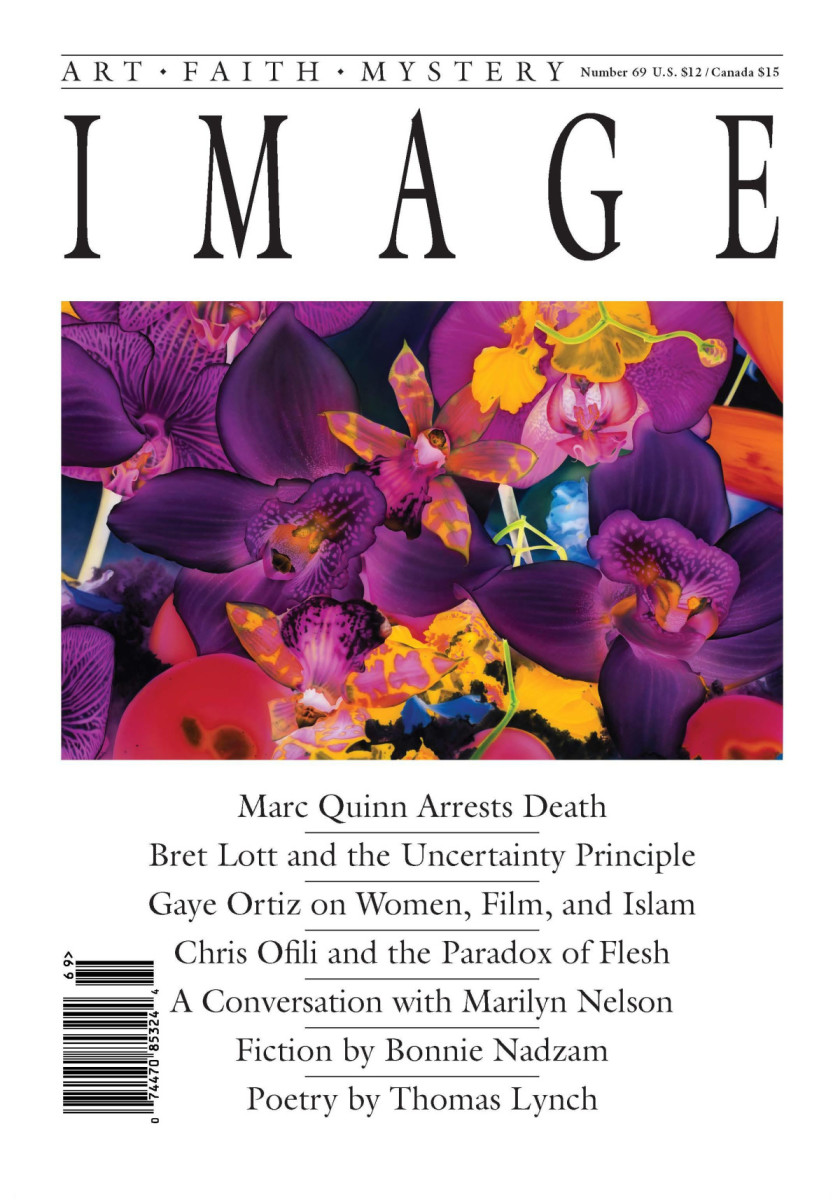 A conversation with Marilyn Nelson; Gaye William Ortiz on women and Islam in cinema; Kim Peavey on theological school; and Bret Lott on the creative writing workshop. With poetry by Thomas Lynch, Jennifer Atkinson, and Fleda Brown; a gorgeous personal essay by Laura Bramon Good; artwork by Marc Quinn and Chris Ofili; and more.

Gregory Wolfe, The Poetry of Exile

Thomas Lynch, His Purgations
He Weeps among the Clare Antiquities
Argyle among the Moveen Lads
Recompense His Paraclete

David Brendan Hopes, For the Virgin of Sorrows

Richard Spilman, The Age of Loss

James Romaine, Marc Quinn: The Matter of Life and Death

Charles Pickstone, Paradox of Flesh: The Art of Chris Ofili

Web Exclusive: Interview with Charles Pickstone on the Art of Chris Ofili

Bret Lott, Writing with So Great a Cloud of Witnesses

Kim Peavey, On Becoming Divine: Within Theological School, and Without

Jennifer Atkinson is the author of three books of poetry: The Dogwood Tree (Alabama); The Drowned City (Northeastern), which won the Samuel French Morse Prize; and most recentlyDrift Ice (Etruscan). She teaches in George Mason University’s MFA program.

Fleda Brown’s new book of memoir-essays is Driving with Dvorak (Nebraska). Her most recent collection of poems, Reunion (Wisconsin), won the Felix Pollak Prize. She is the author of five previous collections, and her prizes include a Pushcart and the Philip Levine Prize. She is professor emerita at the University of Delaware and was poet laureate of Delaware from 2001-07. She is on the faculty of the Rainier Writing Workshop.

Laura Bramon Good lives in Washington, DC, where she works on human trafficking issues for international relief and development agencies. She received an MA from the Johns Hopkins University Writing Seminars and served as the 2005 Milton Center Fellow at Image. Her fiction and nonfiction have appeared in Best Creative Nonfiction, Image, Books & Culture, and Featherproof Press, and at Good Letters, the Image blog.

David Brendan Hopes’s most recent book of poetry, A Dream of Adonis, is available from Pecan Grove Press. He is a professor of literature at the University of North Carolina at Asheville.

Bret Lott is the bestselling author of twelve books, most recently the novel Ancient Highway(Random House) and Before We Get Started: A Practical Memoir of the Writer’s Life(Ballantine). His work has appeared in the New York Times, Yale Review, Georgia Review, and in dozens of anthologies. He teaches creative writing at the College of Charleston.

Thomas Lynch’s most recent books include Apparitions & Late Fictions (stories) and Walking Papers (poems), both published by Norton in 2010. The Sin-eater: A Breviary is forthcoming from Paraclete Press. He lives in Michigan and West Clare, Ireland.

Ed Madden is an associate professor of English at the University of South Carolina and writer in residence at Riverbanks Botanical Gardens in Columbia. His first book of poetry, Signals, won the South Carolina Poetry Book Prize. His poems appear in Best New Poets 2007 andThe Book of Irish American Poetry from the Eighteenth Century to the Present (Notre Dame).

Bonnie Nadzam has published in fiction in many journals, including Epoch, Alaska Quarterly Review, Mississippi Review, Callaloo, Kenyon Review, and StoryQuarterly. Her first novel,Lamb, is forthcoming this year from the Other Press.

Tom Noyes has published two story collections, Behold Faith and Spooky Action at a Distance (both from Dufour). He teaches creative writing in the BFA program at Penn State Erie, the Behrend College, where he also serves as consulting editor for the literary journalLake Effect.

Gaye Williams Ortiz is a lecturer in communications at Augusta State University in Georgia. She is co-editor of the books Explorations in Theology and Film (with Clive Marsh) andTheology and Film: Challenging the Sacred/Secular Divide (with Christopher Deacy; both from Wiley-Blackwell).

Kim Peavey writes and farms in New Hampshire. Her work has appeared in Small Farmer’s Journal, Mothering, and Albatross.

Charles Pickstone, like Chris Ofili, is a native of Manchester. He is the vicar of a predominantly Afro-Caribbean parish in Catford, southeast London, and a frequent writer and lecturer on the spirituality of art. An article previously published in Image won the Bernard Denvir/AICA prize for art criticism in 2006.

Dr. James Romaine is a New York based art historian. He is an Associate Professor of art history and chair of the department of art history at Nyack College. Dr. Romaine is the co-founder the Association of Scholars of Christianity in the History of Art (ASCHA);http://christianityhistoryart.org/.

Richard Spilman is the author of In the Night Speaking, winner of a Sacramento Poetry Center Prize, and a chapbook, Suspension, winner of a New American Press award. He has also written two collections of short fiction: Hot Fudge (Poseidon), a New York Times Notable Book, and The Estate Sale (Texas Review), winner of the George Garrett Prize.

G.C. Waldrep’s collections of poetry include Goldbeater’s Skin (winner of the Colorado Prize),Disclamor (BOA), and Archicembalo (Tupelo; winner of the Dorset Prize). A fourth, Your Father on the Train of Ghosts (in collaboration with John Gallaher) is forthcoming from BOA Editions. He has work in recent or forthcoming issues of American Poetry Review, The Nation, New England Review, New American Writing, and other journals. He teaches at Bucknell University.

Jeanne Murray Walker is the author of seven poetry collections, including A Deed to the Light (Illinois) and New Tracks Night Falling (Eerdmans). Her poems have appeared in Poetry, American Poetry Review, and the Atlantic Monthly. An Atlantic Monthly Fellow at the Bread Loaf School of English, an NEA Fellow, and a Pew Fellow in the arts, she also serves on the editorial board of Image and Shenandoah. Her plays have been produced across the US and in London. She is a professor of English at the University of Delaware and a mentor in the Seattle Pacific University MFA Program.

Read our interview with Charles Pickstone, only available online!