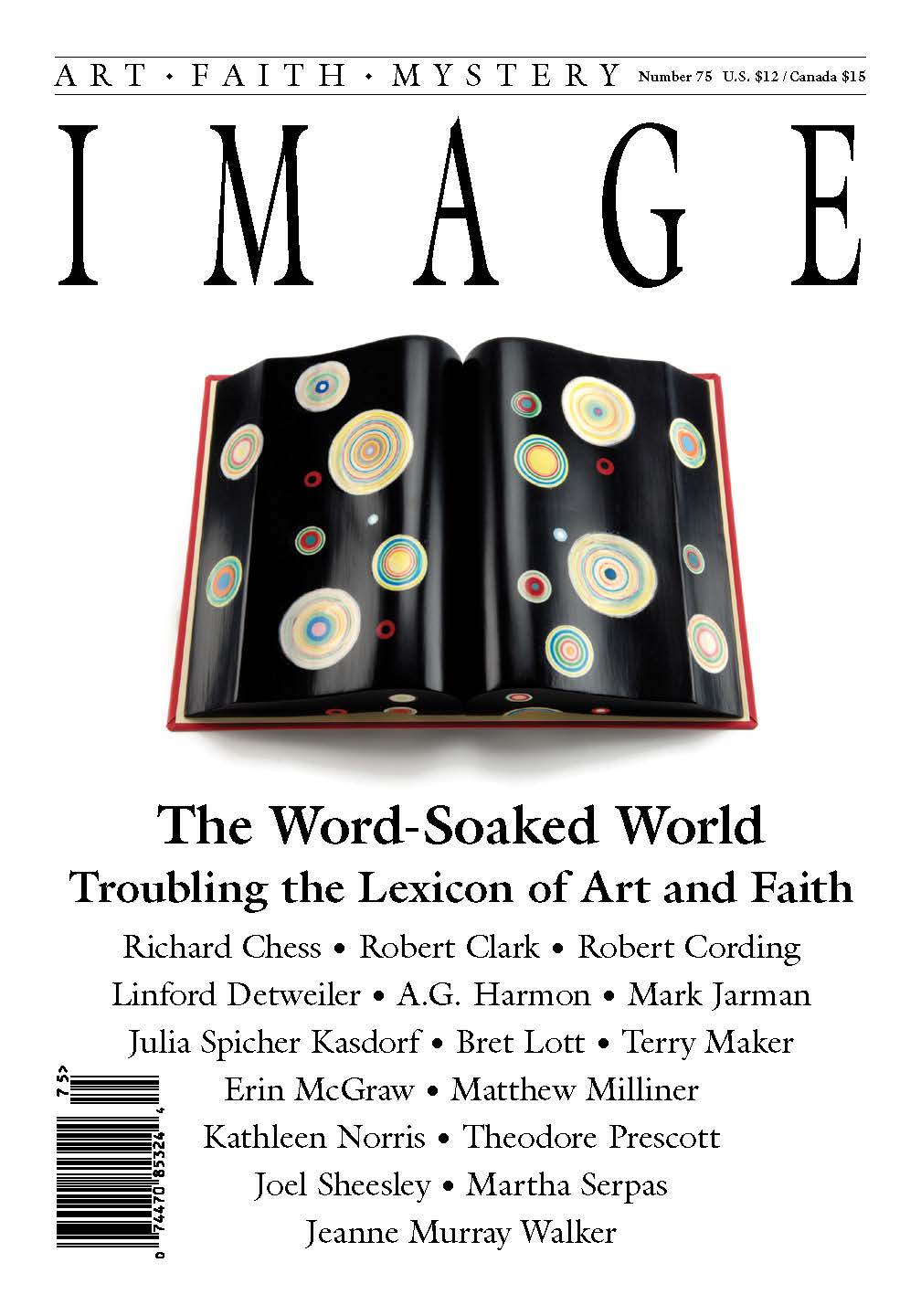 Since 1989, Image has hosted a conversation at the nexus of art and faith among writers and artists in all forms. As the conversation has evolved, certain words have cropped up again and again: Beauty. Mystery. Presence. For this issue, we invited a handful of past contributors to examine our common lexicon as a sort of personal inventory on the part of the journal. Were there words we were using too glibly, we asked, words that needed to be reconsidered, revitalized, or tossed out? The writers’ responses surprised us. Some pieces retain an element of that self-critical spirit we requested, such as the essays on beauty and suffering. But the majority of the essays ended up as a referendum on the power of language, like art itself, to represent and reveal.

Mark Jarman, Language and the Act of Faith

Andrew Hudgins, Orpheus in the Garden
The Offices

Michael Symmons Roberts, In Cutaway
Rare Sighting
Portrait of the Psalmist as Ultra-Singer

Jeanine Hathaway, The Cost of Lessons
On Visiting Carthage

A Conversation with Luci Shaw

Steve Rabey, Of Mind and Matter: The Art of Terry Maker

Judith Harris is the author of two books of poetry, Atonement and The Bad Secret (both from Louisiana State), and a critical book, Signifying Pain: Constructing and Healing the Self through Writing (SUNY). A new book of poems, Night Garden, is due out this spring from Tiger Bark Press. Her poems have recently appeared in The Atlantic, The New Republic, Slate, Narrative, and American Life in Poetry. She has taught at several universities in the Washington, DC, area.

Jeanine Hathaway is the author of the novel Motherhouse (Hyperion); The Self as Constellation (North Texas), winner of the Vassar Miller Poetry Prize; and a chapbook, The Ex-Nun Poems (Finishing Line). She is on the faculty of Seattle Pacific University’s low-residency MFA program.

Mark Jarman’s many books of poetry include Epistles and Bone Fires: New and Selected Poems, winner of the Balcones Prize for 2012 (both from Sarabande). He is Centennial Professor of English at Vanderbilt University.

Richard Jones is the author of seven books of poems, including Apropos of Nothing, The Blessing, and The Correct Spelling & Exact Meaning, all from Copper Canyon Press. Editor of the literary journal Poetry East, he is a professor of English at DePaul University in Chicago.

Alexis Levitin’s translations of poems by Sophia de Mello Breyner Andresen have appeared in over fifty literary magazines, including Boulevard, Puerto del Sol, Prairie Schooner, and Translation, as well as in anthologies such as Gods and Mortals: Modern Poems on Classical Myths and Women in Literature. He has published translations of her fiction with The Literary Review, Rosebud, and Quarter after Eight.

Anne M. Doe Overstreet works as a freelance editor in Seattle and has published her poetry in journals such as Asheville Poetry Review, Nimrod, and Relief. She is the author of the collection Delicate Machinery Suspended (T.S. Poetry) and an associate editor for DMQ Review.

Steve Rabey is a Colorado writer and editor who has authored more than thirty books and two thousand articles for magazines, newspapers, and the web.

Santiago Ramos is a journalist and teaching fellow at the Boston College department of philosophy, where he is pursuing doctoral studies. He has written reviews and essays for Commonweal, First Things, and Image. He is film and TV critic for The Catholic Key and an erstwhile contributor to Image’s blog, Good Letters.

Michael Symmons Roberts’s poetry collections include Corpus, winner of the Whitbread Poetry Award); Burning Babylon; and the forthcoming Drysalter (all from Jonathan Cape). He has written libretti (in collaboration with composer James MacMillan) as well as two novels, and is professor of poetry at Manchester Metropolitan University.

Anya Krugovoy Silver is the author of The Ninety-Third Name of God and the forthcoming I Watched Her Disappear (both from Louisiana State University Press). She has published poetry in Five Points, Southern Poetry Review, The Christian Century, Prairie Schooner, and elsewhere, and teaches in the English department at Mercer University.

Roger Williams has worked for the State of West Virginia for many years. His writing has appeared in various journals, including Image, Hudson Review, and Gettysburg Review.

Terry Maker’s work is represented by the Robischon Gallery in Denver, Colorado, and Kirk Hopper Fine Art in Dallas, Texas. Her website is www.terrymaker.com.

Read our reader interview with Linford Detweiler, only available online!