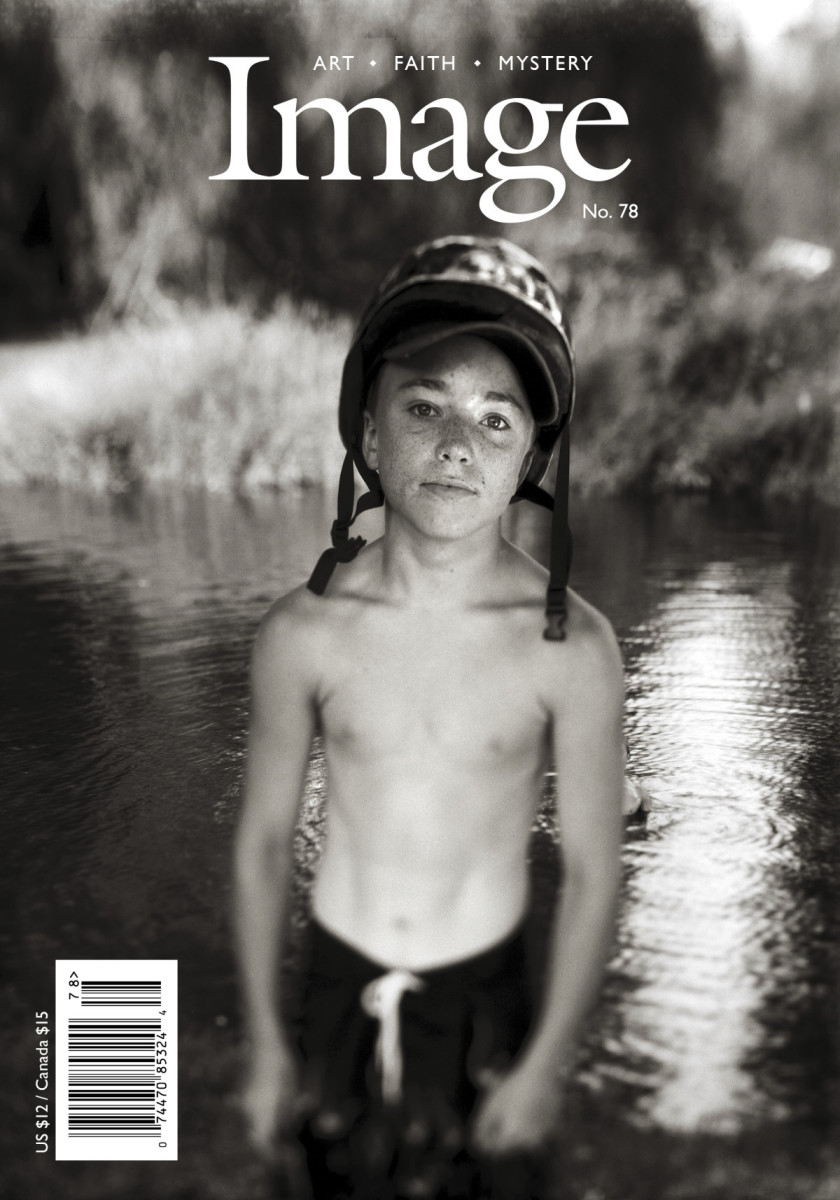 New work by Richard Rodriguez; poems by Jennifer Maier, Javier Sicilia, Bruce Beasley, and Karen An-hwei Lee; and Gregory Wolfe on the meaning of comedy in our time. Plus, Jeffrey Overstreet considers the collaborative portraits of Fritz Liedtke; Steve Prince’s art “wrought in the spirit of the possible”; a conversation with author Robert Clark; and more.

Gregory Wolfe, The Steeple and the Gargoyle

Javier Sicilia, The Track in the Wilderness
Translated by Dan Bellm

Bruce Beasley, Repetition Compulsion
Cleft for Me Let Me Hide Myself from Thee

Garret Keizer, Of Unicorns
When Honor Faced Off Against No Honor
When It Was Still Possible to Turn Things Around

A Conversation with Robert Clark

Richard Chess is the author of three books of poetry, most recently Third Temple (Tampa). He is a regular contributor to Image’s blog, Good Letters. At UNC Asheville, he directs the Center for Jewish Studies and serves as the Roy Carroll Professor of Honors Arts and Sciences. He is active in the movement to integrate contemplative practices into higher education and has participated in the Jewish Mindfulness Teacher Training Program.

John F. Deane was born on Achill Island in 1943. In 1979 he founded Poetry Ireland and the Poetry Ireland Review, which he currently edits. He has published several collections of poetry, including Snow Falling on Chestnut Hill: New & Selected Poems and Semibreve (both from Carcanet).

Katy Didden is the author of The Glacier’s Wake (Pleiades). A recent Hodder Fellow at Princeton University, she will join the creative writing faculty at Ball State University next fall.

Ryan Flanagan grew up in Turnersville, New Jersey, and is currently a Toulouse Dissertation Fellow at the University of North Texas. His nonfiction has appeared in CutBank and Diagram.

Carrie Fountain’s poems have appeared in American Poetry Review, Poetry, and Tin House. She is the author of two poetry collections, Instant Winner and Burn Lake (both from Penguin). The latter won a 2009 National Poetry Series Award. She is writer-in-residence at St. Edward’s University in Austin, Texas.

Margaret Gibson is the author of eleven books of poetry and one prose memoir, most recently Broken Cup and Second Nature (both from Louisiana State). Her awards include the Lamont Selection for Poetry, the Melville Kane Award, the Connecticut Book Award in Poetry, and two Pushcarts. She has been a finalist for the National Book Award and is professor emerita of the University of Connecticut.

Graham Hillard is the editor of the Cumberland River Review and an associate professor of English at Trevecca Nazarene University. He has contributed to The Believer, Notre Dame Review, Los Angeles Review of Books, Oxford American, The Weekly Standard, and other magazines. He has been a resident fellow at the Virginia Center for the Creative Arts and a Tennessee Williams scholar at the Sewanee Writers’ Conference.

Kathleen L. Housley is the author of nine books, most recently the poetry collection Epiphanies (Wising Up) and The Sage of Time and Chance (Wipf & Stock), a novel based on Ecclesiastes.

Judith Kunst is the author of The Burning Word: A Christian Encounter with Jewish Midrash (Paraclete). Her poetry has appeared in The Atlantic, Poetry, Able Muse, Measure, Southern Poetry Review, and other publications, as well as through the Spark and Echo Arts project. She lives with her family at La Lumiere School in northwest Indiana.

Morgan Meis is critic-at-large for The Smart Set and an editor at 3 Quarks Daily. He has a PhD in philosophy from the New School for Social Research and is a 2013 Whiting Award winner.

Mark Sprinkle is an artist, craftsman, writer, and curator. His PhD from the College of William and Mary focused on the phenomenology of art in domestic environments. He has served as senior fellow in arts and humanities at the BioLogos Foundation and now convenes conversations on art and faith from his home in Richmond, Virginia. www.marksprinkle.com.

John Terpstra is a poet whose most recent collection, Brilliant Falls, won the Hamilton Literary Award, and a nonfiction writer whose most recent work is The House with the Parapet Wall (both are from Gaspereau Press). He has been short-listed for both the Governor General’s Award and the Charles Taylor Prize and is, by trade, a furniture-maker.

Daniel Tobin is the author of seven books of poems, including Second Things, Belated Heavens (winner of the Massachusetts Book Award in Poetry), The Net, and the forthcoming From Nothing (all from Four Way); as well as the critical studies Passage to the Center (Kentucky) and Awake in America: On Irish-American Poetry (Notre Dame). His awards include fellowships from the NEA and the Guggenheim Foundation.

Brian Volck is a pediatrician who received his MFA in creative writing from Seattle Pacific University. His first collection of poetry, Flesh Becomes Word (Dos Madres), was released in 2013. He is coauthor of Reclaiming the Body: Christians and the Faithful Use of Modern Medicine (Brazos). His essays, poetry, and reviews have appeared in America, The Christian Century, DoubleTake, and Health Affairs.

Read our interview with Steve Prince, only available online!