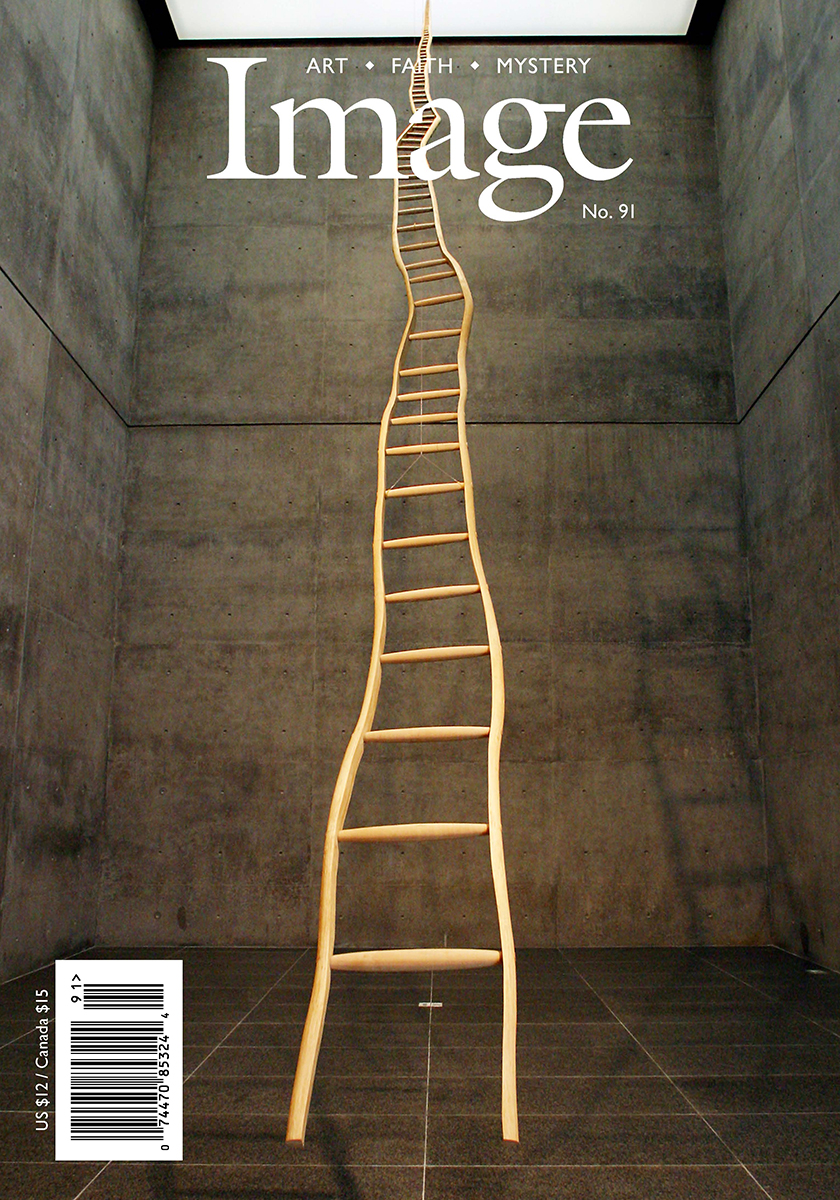 Featuring the art of renowned African American sculptor Martin Puryear, winner of the National Medal of the Arts, as well as the art space created by Irish American painter Sean Scully at the thousand-year-old chapel of Saint Cecilia in Montserrat, Spain. Fiction by Mika Seifert that imagines life in a dictatorship where ladders and stairs are banned; Swedish fiction writer Torgny Lindgren reimagines the patriarch Joshua as a man of metaphysical hunger; and Marilyn Abildskov story deals with the Mormon practice of baptisms for the dead. In nonfiction: Amye Day Ong’s bittersweet, comic memoir about childhood illness and Christian genre fiction, and Stina Kielsmeier-Cook on her husband’s loss of faith and her own more ambiguous spiritual journey. Becca J.R. Lachman reviews what she calls New Monastic poetry—work by writers who crave community and are finding it in surprising ways. Gregory Wolfe on Scorsese’s Silence. Interview with Michael Gruber, whose literary thrillers have supernatural underpinnings. Plus poems by Adélia Prado, Javier Acosta, Abdellatif Laâbi, and others.

Luke Johnson, Tom as a Series of Declaratives
Earthquake

Adélia Prado, The Girl and the Fruit
Daughter of the Ancient Law
The Scar
Lamentation to Move Jonathan

Tadeusz Dabrowski, [I strive to live as if...]
Jam Jars

Abdellatif Laâbi, To My Son Yacine

Karen L. Mulder, Presence in a Space: The Flickering Contradictions of Martin Puryear

Stina Kielsmeier-Cook, The Doubt that Breathes Beside You

Marilyn Abildskov is the author of The Men in My Country (Iowa). She has published stories and essays in Agni, The Sun, and New Ohio Review. The recipient of fellowships from the Rona Jaffe Foundation, Yaddo, and the Djerassi Writing Residency, she lives in the San Francisco area where she teaches in the MFA program at Saint Mary’s College.

Javier Acosta, winner of Mexico’s Aguascalientes National Poetry Prize, has published seven books of poetry, most recently Manual del extravío (Manual for Straying). He is professor of art and hermeneutics at the Universidad Autónoma de Zacatecas.

Paul Anel was ordained a Catholic priest in 2010 and has lived in the diocese of Brooklyn, New York, since 2008. A member of the Heart’s Home Movement, he ministers to artists, organizing studio visits and international art residencies.

Dan Bellm has published four books of poetry, most recently Deep Well (Lavender Ink) and Practice (Sixteen Rivers), winner of the 2009 California Book Award. He teaches translation and poetry at Antioch University Los Angeles and translates poetry and fiction from Spanish and French, including Jorge Esquinca’s book-length elegy for his father, Description of a Flash of Cobalt Blue (Unicorn) and The Song of the Dead by Pierre Reverdy (Black Square).

George David Clark is an assistant professor of English at Washington & Jefferson College. His first book, Reveille (Arkansas), won the Miller Williams Prize and his new work appears in Agni, Gettysburg Review, The New Criterion, Southern Review, and elsewhere, as well as online at Verse Daily and Poetry Daily. He is the editor of 32 Poems.

Tadeusz Dąbrowski’s poems and essays have been translated into twenty languages and have appeared in The New Yorker, Paris Review, Agni, American Poetry Review, Tin House, Crazyhorse, The Common, and elsewhere. He is the author of the poetry collections Black Square and then forthcoming Post (both from Zephyr), editor of the literary bimonthly Topos, and art director of the European Poet of Freedom Festival.

Christian Detisch’s poems and reviews have appeared in Blackbird, Minnesota Review, Superstition Review, the Academy of American Poets website, and elsewhere. He received his MFA in creative writing at Virginia Commonwealth University, where he served as the Levis Fellow coordinating the Levis Reading Prize, and lives in Washington, DC, where he works as an activist.

Tom Geddes, former head of Germanic collections at the British Library in London, has translated the novels of Torgny Lindgren and other Swedish writers including Lars Gustafsson, Björn Larsson, and Per Wästberg, and the Norwegians Nikolaj Frobenius, Gunnar Kopperud, and Jan Wiese.

Jessica Goudeau has a doctorate in poetry from the University of Texas. She has written for the Washington Post, Muftah, and other publications, and is currently writing a book about her decade working with refugee artisans. She blogs at jessicagoudeau.com and tweets as @jessica_goudeau.

Luke Johnson is the author of the poetry collection After the Ark (New York Quarterly). His poems have appeared in New England Review, Poetry Northwest, Southern Review, Threepenny Review, and elsewhere. He is poetry editor at storySouth and teaches high school English in Nashville.

Stina Kielsmeier-Cook has written for The Other Journal, Geez, and The Englewood Review of Books. She manages the publication Bearings Online at the Collegeville Institute and lives in Minneapolis, MN.

Karen Kovacik is the author of the poetry collections Metropolis Burning (Cleveland State) and Beyond the Velvet Curtain (Kent State) and the editor of Scattering the Dark, an anthology of Polish women poets (White Pine). She served as Indiana’s poet laureate from 2012 to ’14.

Abdellatif Laâbi is the second writer of Moroccan descent to be awarded France’s prestigious Prix Goncourt and is considered by many to be Morocco’s greatest living poet. His collection Beyond the Barbed Wire: Selected Poems (Carcanet) focuses on the poetry he wrote during his years as a political prisoner in Morocco in the 1970s and early ‘80s.

Becca J.R. Lachman’s books include Other Acreage (Gold Wake) and The Apple Speaks (Cascadia). Also the editor of A Ritual to Read Together: Poems in Conversation with William Stafford (Woodley), she lives in Athens, Ohio.

Torgny Lindgren is one of the eighteen members of the Swedish Academy who award the annual Nobel Prize in Literature. His novels Bathsheba, The Way of a Serpent, Light, In Praise of Truth, Sweetness, and Hash, and a volume of short stories, Merab’s Beauty, have been translated into English. The story “Joshua” was published in Swedish in the 1986 collection Legender (Legends) by Norstedts, Stockholm.

Antonia Lloyd-Jones translates contemporary Polish fiction, reportage, essays, poetry, and children’s books. She has twice won the Found in Translation award and is a mentor for the Emerging Translators’ Mentorship Program and co-chair of the UK Translators Association.

Greg Miller is professor emeritus of English at Millsaps College and now works as an editor at Sheep Meadow Press. His books include three collections published by the University of Chicago Press Phoenix Poets Series and one by Mercy Seat Press. His poems appear in Spiritus, Slate, and Virginia Quarterly Review.

Karen L. Mulder is a writer, musician, graphic designer, historian, and commentator on visual culture trained at Boston University, Radcliffe, Yale, and the University of Virginia. She currently supports ecotherapy programs in the Shenandoahs, along the Blue Ridge, and in the wilds of California.

André Naffis-Sahely’s debut collection of poetry, The Promised Land, will be published by Penguin in 2017. He has translated over twenty titles from the French and the Italian, including works by Tahar Ben Jelloun, Alessandro Spina, Rashid Boudjedra, and Abdellatif Laâbi.

Ewa Elżbieta Nowakowska is a poet and essayist as well as the translator of Alice Munro’s The View from Castle Rock, Thomas Merton’s Raids on the Unspeakable, and Ewa Lipska’s poetry collection The New Century (Northwestern), among others. Born in Krakow, she is the author of seven poetry volumes and a book of short stories. Her poems have been translated into English, Hungarian, Spanish, and Hebrew.

Amye Day Ong recently received her MFA in creative nonfiction from Columbia College Chicago. She also holds an MA in religion from Yale Divinity School. Her essays have appeared online in The Common and Green Briar Review.

Adélia Prado is one of the foremost poets of Brazil, praised both in literary circles and the mainstream media, described by Veja (Brazil’s Newsweek) as “a writer of rare brilliance and invincible simplicity.” Her longtime translator, Ellen Doré Watson, published two translations of Prado’s work in English: The Alphabet in the Park (Wesleyan) and Ex-Voto (Tupelo). In 2014, Prado was awarded the prestigious Griffin Trust for Excellence in Poetry’s Lifetime Recognition Award.

Mika Seifert is a concert violinist and writer whose short stories have been published in the Antioch Review, Southern Review, Chicago Review, London Magazine, and elsewhere.

Mark Wagenaar’s books are Voodoo Inverso (Wisconsin) and The Body Distances (Massachusetts), winners of the Pollak and Juniper Prizes respectively. He is a visiting assistant professor at Valparaiso University.