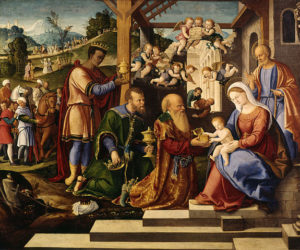 I didn’t play King Herod this year. That role—which my father occupied in my youth and is now all mine!—is a coveted cameo in our family’s annual Epiphany play, full of transparently feigned concern for the welfare of an unexpected (and for Herod, most unwanted) newborn king.

Regrettably, we had no time this year for an Epiphany party—that night or any night. I feel its absence the way one might regret forgetting a child’s birthday.

My childhood imagination was fed with a banquet of German Catholic traditions: feast day cakes, Easter breads, and the burning of last year’s palms on Ash Wednesday to spread over the garden. Advent through Epiphany was the high season of ceremony: an Advent wreath on the kitchen table, paper silhouettes of saints marching across the kitchen window, a puppet show and stockings with fruit, chocolate, and one small, treasured gift on St. Nicholas day (December 6).

We rarely brought a tree indoors before the solstice; the needles had to stay green through the first week of January. December 25 was the first day of Christmas, ushered in with Midnight Mass, then a brief, fitful sleep before a daylong explosion of gifts, family, and feasting. In its wake, a tattoo of Saint’s Days: Stephen, John the Evangelist, Holy Innocents, and Thomas a Becket. New Year’s Day meant soup, sherry (for the mature guests), and visitors.

But the culmination of Christmas was January 6, when the Three Kings themselves left one last gift for each of us before dawn, and evening brought a final Christmas feast, a special guest or family, and The Play. The guests were of my parents’ choosing, often a complete surprise to us kids.

They, as we, were encouraged to dress their parts: kings with paper crowns and bath towel capes, shepherds in makeshift keffiyehs, hints of prodigious learning for Herod’s scribe, and Herod (my father, always) wearing whatever complemented the part’s signature scowl.

One year, my older sister’s Hindu mother-in-law played an angel, waving a sheer wrap atop her sari like wings as she gave sleeping magi the lowdown on Herod, advising they go home by another route. As she finished her lines—my mother serving as prompter from the living room couch—she cried aloud, “I don’t know what it means, but it’s so beautiful!”

With the kings safely on their way home, we moved to the front door, where my mother wrote above the lintel, in chalk, the initials of the kings’ traditional names (Caspar, Balthasar, and Melchior) and the year. Then it was back to the table for cake, conversation, and the close of Christmas’s twelfth and final day.

My wife and I have done what we could to preserve the tradition, keeping it even before we had our own children, reveling in the dearest of my childhood memories. We encouraged each year’s special guests to join in the spirit. One January, our parish priest arrived on our front step already decked out in a bathrobe and dark blue turban with a gold star suspended overheard on a wire. “Thank God I came to the right house,” he gasped as we opened the door.

Our children loved the celebration for years, though they’ve come to see it now as more evidence of embarrassing familial weirdness. They haven’t begun mumbling vacuous psychological dogmatisms about “family of origin” yet, but I know Gresham’s Law applies as much to language as it does to currency. I hope for better, but I’m still bracing myself.

This year, the manic pace of Christmas travel and winter break schedules, as well as the premature delivery of my nephew, whose family we’d planned to have as our special guests, canceled the party and the play.

The kings, however, stealthy and unstoppable as ninjas, left their gifts before dawn. Like St. Nicholas, magi share my enduring fondness for books as presents. My son perhaps sensing a need for politeness, refrained from his usual bibliophobic quips like, “Print is dead, Dad.” Books, like bathrobe magi, pale in comparison to videos, iPods or texting, though electronic diversions may have camouflaged any regret my teenage children felt over the cancelled festivities.

What’s keeping an unobserved Epiphany on my mind is my just-passed week of interviews and observations on the Navajo Reservation. The teens and young adults I met echo my children’s electronically-induced cultural and spiritual amnesia, while their parents remind me of me: wondering how they could have done better in faithfully transmitting a fraying tradition.

Vine DeLoria wrote that electricity did far more damage to Native communities than sham treaties and smallpox-laden blankets. Electric lights and entertainment lured families away from multigenerational fireside story-sharing to indoor enclaves where the stories each generation separately “consumed” were targeted for maximal profit-making effect.

DeLoria is no friend of Christianity, so it’s interesting to find myself making common cause. Then again, defending children from human predation has forced unlikely alliances before. Consumer capitalism cares little which children it eats as long as its gullet stays full. Like Navajo teens who emerge from years of Dine’ bizaad classes unable to utter a Navajo sentence, my children probably can’t tell a novena from a narthex, but they know and crave every variety of electronically-mediated experience.

And how much does it help that I come home from the hospital, check on the kids’ homework schedules or start dinner, then sit down at the computer to “write”—a surprisingly elastic verb which apparently includes emailing, blog-surfing, and book-coveting?

Let’s face it: I’m a pot complaining to the world about my kettle progeny.

Which has me suddenly re-imagining my Lenten discipline this year. What electronic drugs can I learn to live without? Is there still time to show my children the value of (at least) a partially unplugged life? I’m still thinking—not only about what to surrender, but how to most fruitfully fill the newly-available time. Let me know if you have an idea.

.The above painting is by Girolamo da Santacroce and is public domain.