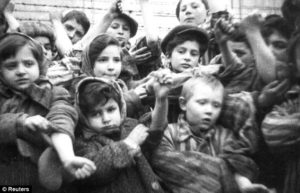 I locked myself in my dorm room one weekend my sophomore year of college.

I had a double minor in European History and German. In one of my Twentieth Century Europe classes, we’d spent our Friday class watching a documentary about the Holocaust. Though it didn’t contain any “new” information, I was struck as if it were.

I wanted to know in a more concrete way what had happened, how this had happened, why this had happened. So I went to the library and checked out every video about the Holocaust I could find: Simon Wiesenthal’s Genocide, Claude Lanzmann’s nine-hour Shoah, various selections from PBS and the History Channel with titles like The Final Solution and Of Blood and Race.

I ate in my room. I didn’t go outside. For three days.

On the third day, my boyfriend at the time found me bleary-eyed and gray-skinned. After hearing me go on and on about the ships of refugees that tried to dock in Manhattan and were turned away to die, he informed me that he didn’t want to talk to me again until I was out of that mood. He instructed me to go home and watch Willy Wonka or anything else not at all related to the Holocaust.

I told him, full of what I then believed to be righteous empathy and love for humanity, that Willy Wonka was more depressing to me than any number of Holocaust documentaries. He rolled his eyes (quite rightly) and drove back to his house.

Because it was and remains for me a grisly pornography, the grimmest of all voyeurisms: the emaciated bodies pile upon pile, the pale and tattooed wrists, the shrunken pelvic bones, the stacks of children’s jackets, the striped shirts.

The impulse not only to understand, but to watch, to watch suffering in its bleakness is a troubling one for me. I remember the veiled way I stared at National Geographic pictures of bodies preserved in lava and clay at Pompei as a child during an elementary school reading hour. I kept the magazine pressed tightly to my chest, chagrined to be seen, unwilling to look away.

I remember also discovering Matthew Brady’s devastating pictures of Civil War battlefields around the same time, and later pictures kept in museums around me of Civil Rights era lynchings and beatings. When I was eight, I saw one of the earliest KKK hoods kept behind glass at a Southern History museum in Vicksburg. I did not yet know what the Klan was or what they had done, but I knew it was evil, and I dreamt that night, terrified, of men in white robes.

Not only can I hear about or read about Rwanda, Bosnia, Afghanistan, Haiti, or Myanmar, I can watch. In real time. At any hour of day or night. On any number of mediums. Just like I can watch Law & Order or CSI or any other grisly fictionalized forensic show.

Ostensibly, witnessing human suffering should make me, should make us all, more willing to act to prevent it. In reality, the opposite effect is often achieved.

One of the urban legends surrounding the televised Tutsi massacres in Rwanda is that a CNN viewer, watching the genocide unfold before him, complained to the network about the violence. He didn’t want to see dead bodies while he was trying to eat his breakfast. It put him off his cereal, he said. Poor man.

In mostly comfortable America, I drive to work each day with a cup of good coffee in a travel mug. I expect planes, subways, and busses to be on time. I expect security lines to be short and efficient. I expect traffic to flow and to operate by a strict set of rules. Every night, I go to bed with clean teeth, a full stomach, in a lamplit room with expensive sheets and a good book to read.

Privilege for me has not always bred deeper engagement in the world, but apathy, a contented numbness that underscores any brief encounter with the horrific—a sense that the problems are so many and so varied that I could never do enough to help anyway. When it comes to car bombs, emaciation, guerilla warfare, I am only a visitor. I am not a resident. When I turn the television off, the genocides end. Outside all I hear is the wind in the trees, not the hail of bullets.

I may never become more than a visitor to the kind of practical fear in which over half the world makes its home. But of course, I can care. And of course, I can act. Kathleen Norris reminds us that to care at all is to cry out. I’m just not sure that a constant bombardment of the images of suffering, so easily turned on and off, is the optimal way to summon the kind of care that leads to action.

Several weeks ago, the iconic sign leading into Auschwitz was stolen. Arbeit Macht Frei, it read. Work makes you free, in English. The phrase was, of course, a mockery and a lie. Neither work nor rest could make them free, and many who survived were never again wholly free in spirit.

I watched the groups of protesters gathered beneath the restored wrought iron sign, holding Israeli flags, pictures, candles. Then I turned the television off, and for the first time in years, I wept for the victims of the Holocaust, and I wept for the numbing of my heart.