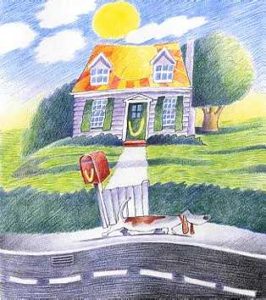 I want a bigger house. When we moved to our little cottage 18 months ago, it seemed perfect for a family of three. We didn’t think another baby was on the way, and anyway, an imagined baby and his paraphernalia took up a lot less space.

Now that he’s a reality, our two bedrooms, one bath, and no closets are making me claustrophobic and irritable, and the idea of him sharing a room with his five year old sister, which I had once romantically thought would make them close, now seems like it will only result in two sleep-deprived kids. For now he lives in our bedroom, which means we’re locked out after 6:30 most evenings, not wanting to risk waking him with the squeak of the doorknob.

But I’m hesitant to move. Growing up, I lived in the same house for the first 15 years of my life, and nothing looms larger in my imagination than my memories of that space. I still recall the details: the feeling of the fabric on the wing chairs in our living room, always cool against the skin; the way the afternoon sunlight flooded the kitchen through the sliding-glass door. I want my children to have those kinds of memories. I want their childhood home to be as familiar as another family member.

The house I grew up in sat on what we used to call Slidell’s only hill, which wasn’t really a hill at all but a mere slope, surely manmade as a protection from the frequently rising waters of Lake Pontchartrain to the south and Bayou Liberty to the west. Many years before Hurricane Katrina, our next-door neighbor, Mr. Sam, who was also the mayor, warned us that there was no levee system in place to protect us from Lake Pontchartrain. But we felt safe there on our hill. While other houses in our neighborhood flooded, ours never did.

Southern Louisiana is so flat that our driveway, a winding, sloped patch of pocked concrete, proved positively exotic to the kids in our neighborhood. We crashed down it on our skates, building enough momentum to sail clear down to the next corner, where I once collided with a car as it pulled away from the stop sign and ended up with my left arm in a sling.

The house itself was unimpressive, a red brick and vinyl siding ranch with a scrolled iron porch railing welded by our neighbor in his backyard workshop. Later, when my parents could afford some upgrades, they added French doors and real gas lamps.

It was just one of many identical houses dotting the marshy territory north of Lake Pontchartrain, assembled in low-slung neighborhoods that flooded any time it rained, which was nearly every day in summer. Then we’d all be on the five o’clock news in New Orleans—our neighbors rowing up to the high ground of Pontchartrain Drive in pirogues, our classmates floating on rafts in the drainage ditches.

I used to dream of waking up underwater, the house rocking gently, my window covered in fishing net. Even our living room, with its wood paneling and dim hurricane lamps and long shag carpet and an honest to God captain’s wheel over the wood-grain television, had a shipwrecked quality. Maybe that’s why one of my earliest memories is dancing with my family to “Yellow Submarine.”

When the waters receded, the grass forced its way through the fragile streets of our neighborhood. They cratered like the moon and once swallowed the entire front tire of my bike. I got another sling, that time on the right arm. More than the pain from the fall, I remember my grandmother sitting next to me on the way home from the emergency room, and how the cherry from her Kent 100 smoldered in the darkness before falling like a star, grazing the blue canvas of my sling before burning a hole clear through the backseat of the Monte Carlo.

Many of my friends lived right in the lakes and the bayous, their swooning camps and A-frames built on pilings that my grandfather swore sank inches into the sandy soil every year. Those slumping houses always seemed romantically dangerous to me, but now, after Katrina, I think it took a certain measure of bravery, or willed ignorance, to build a house in Slidell at all. “The Gulf pushes the lake, the lake pushes everything else, and it all ends up in your living room,” Mr. Sam told us.

He took me on a tour of my old neighborhood after Katrina, the sights familiar to me by then from the national news: a FEMA trailer in every overgrown yard, the white Xs painted on the bricks and siding tallying the number of dead found within. He took me to my old house, the house where I lived with my mother, my first universe, the setting, even now, of all my dreams. Even last night.

He and I walked through a hole where the French doors had been. Inside there was nothing but beams and studs, the foundation gritty under my feet. The water had climbed our little hill and filled our house to overflowing. The ceiling fan blades were bowed and waterlogged. I removed the desiccated tassel from the pull chain, my fingers remembering it as silky and cool, and tucked it in my pocket.

That was years ago now. Since then, the house, like much of the neighborhood, has been completely renovated, updated. It’s now full of natural light, neutral paint and stainless steel appliances. I’m grateful, honestly. It had been crumbling, neglected, since we’d moved away, and the sight of it unloved was heartbreaking to me. Now it exists only in my imagination.

Maybe this little cottage will be that way for Charlotte and Alex. But I hope it will be some other house. One that has closets.

“Maybe it is a good thing for us to keep a few dreams of a house that we shall live in later,” Gaston Bachelard wondered in The Poetics of Space. “So much later, in fact, that we shall not have time to achieve it. For a house that was final, one that stood in symmetrical relation to the house we were born in, would lead to thoughts—serious, sad thoughts—and not to dreams.”

Behind every urge to move, I know, is the desire to find again that little house in Slidell.