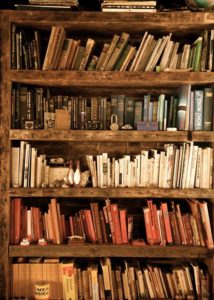 One of my earliest memories is of the bookcase in the second floor hallway of my grandparent’s house falling on top of me. I had been climbing it trying to reach a book on the top shelf when it toppled. I remember lying there, stunned, the weight of the books and their cold, sharp corners digging into my chest and sides. I didn’t panic. Instead, I recall feeling a strange comfort having my shoulders pinned to the floor by so many books.

Years later, as a sophomore in college, I wrote my first short story in the guest bedroom of my grandparent’s house during a thunderstorm. This was a different house, just outside the central Indiana town of Peru, where my grandfather had grown up and where he had moved when he was diagnosed with cancer, to be closer to family and friends. By the time of this visit, my grandfather had been dead six years.

I wrote while lying across the twin bed, a stiff-backed, cadet blue composition notebook cracked open on the comforter. The story was autobiographical and coming-of-age about two brothers visiting their dying grandfather. The youngest brother reads in a book of “101 Fascinating Facts” that if you dug a deep hole and stood at the bottom of it, you could see he stars even during the day, and so throughout the story he attempts to dig a hole in his grandparent’s backyard.

The storm was spectacular and romantic. Every time lightening flashed I could see the furrowed field outside the window and the dark windbreak beyond.

In this memory, two ancient images of leisure and work meet: writing and farming.

In The Eternal Trail, M.G. Lockley makes this observation:

To record the bounty of the field and farm, the cuneiform table was devised. Made from the same clay as the substrate itself, these tablets were laid out like tiny plots of land with rectilinear boundaries and lines of script, like maps or plans of the very fields their information pertained to. In essence, these tablets were symbolic miniatures of the agricultural landscape, just as tracks were symbolic representations of the animal landscape in a previous era. The tablet and the field coevolved as manifestations of an emerging cartographic consciousness.

This was the first time I had ever visited my grandmother alone, so I was able to spend long stretches alone sitting in my grandfather’s vacant recliner next to his small library, reading.

I knew that grandfather had wanted to be a writer, but that was all—I was only twelve when he died and so never had a chance to discuss writing or writers. As far as I knew, my grandfather went from the Navy straight to working on the railroad, no break to seek his fortune or write verse.

The income he earned helped him raise a family of seven children, and later give him the disposal income to subscribe to the Book of the Month Club, and even take a mail correspondence course on how to become a writer. So all I really had to go on, the only trail he left, was his modest library—two low bookcases—and the occasional underlined phrase or starred passage.

Gaston Bachelard writes that libraries used to feel like forests to him, impersonally “before-me, before-us.” I know (and like) the feeling of being lost in the impersonal forest of a library. Though “impersonal” isn’t quite it. To me, the shelved books in the libraries of my youth were indifferent, perfectly content to stay closed. But the books in my grandfather’s library were burning to be opened.

An open book is a lovely thing. Whereas the library and the shelves of closed books stand impersonal “before-me, before-us,” the open book, like the furrowed fields and meadows, is inviting, intimate, communal—“with-me, with-us,” says Bachelard.

Recently my grandmother found among some of my grandfather’s things a handwritten manuscript written in pencil on canary yellow legal ruled paper titled “An Evening in Geneva, Indiana.”

It isn’t exactly a story, it’s more like a memo. In fact, he says as much in the last sentence, but there are aspects of the style, of observations that he makes, and questions he asks that are for lack of a better word “literary” in intent.

A man had been in an accident and my grandfather’s job was to go to his home and interview him, see if his injury claim held water. In a case like this, a standard memo would detail his attempts to interview the man, ending with a plan of action.

According to one authoritative writing guide: “memos pose problems and offer solutions.”

Additionally, a memo writer must bear in mind his audience, who will determine the style, as well as the kind and level of detail.

A memo can be a now-hear-this from the top brass, but it is also an aid to memory, something written during and/or immediately after an event in order to help clarify what happened for later reference and reflection.

My grandfather’s memo intersects with all of these definitions, and in so doing it helps me to begin developing a theory of the memo. The memo, like the novel, can contain anything and everything. What ever falls within the field of the page is the memo—this is what you must remember—take note.

And yet there are aspects of my grandfather’s memo that deepen these definitions—because they include mystery and reflection.

Sitting in his car in the man’s driveway, rain streaking the windshield, the bell in the nearby church steeple tolls thirty-six times—it is seven pm and there is no hearse out front or invading horde to account for this number. He wonders aloud if he is the only one who notices.

Eating lunch at a diner he eavesdrops on postal workers having coffee. After, he notices a teenage boy and girl—sweethearts?—rocking on a porch and is intrigued that they don’t stop to notice him. In fact, there is the feeling that he wanted them to notice him noticing them.

Who is the audience here for this writing that is so alive with self-awareness and self-consciousness?