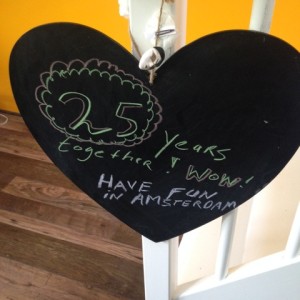 As I write this, my husband and I are on our twentieth day away from home as we travel through parts of Europe and England on holiday. It’s a celebration trip for us—as of this August, we have been married twenty-five years. Though at one point we envisioned six or eight weeks abroad, neither of us has ever been outside of North America before so we kept the scope of the trip manageable and will be headed home in another week.

To save money, we’ve used Airbnb for lodging in a couple of places along the way. If you’re not familiar with Airbnb, it’s a network of people around the world who have rooms, apartments, houses, treehouses, houseboats, RVs, yurts—and any other type of space you can think of—on offer for travelers to use instead of hotels, motels, hostels, or other managed properties. Property owners (or “hosts” as they are called on the site) list descriptions of their spaces along with maps and pictures and, perhaps most importantly, reviews by previous guests.

We booked an apartment in Amsterdam (our first stop on the trip) and a converted shed in someone’s backyard outside of London through the site. Leading up to our arrival in Amsterdam, our host, Camille, provided helpful and detailed instructions about how to get from the airport to the apartment, just as a friend or family member would. He was there to greet us when we arrived. Hanging from the staircase was a heart-shaped chalkboard on which was written “25 years together! Wow!” just for us.

He explained how to use the shower, demonstrated the roof terrace door, and gave us an orientation to his fancy coffee maker. There was a binder of recommendations for day trips we might take. And then, he left us alone in his personal space for three days.

Later in the trip, Karmen welcomed us to her home in a suburb of London after we’d followed her clear and detailed directions. We walked through the house and out into the backyard where our accommodations were—a cross between a tiny cottage and a converted shed with its own bathroom, little fridge, teakettle, and heated floor.

Each morning we were invited into the main house where we sat in Karmen’s kitchen and she fed us bread, cheese, jam, eggs, fruit, coffee, tea, anything we might want. With her parakeets chirping in the background, she told us about trips she and her husband had taken to their homeland of Croatia, to France, to Arizona and Utah, to New York, and all over England. Her daughter lives in Singapore with the new grandbaby. Her own grandmother lives upstairs and may move out to the shed soon since the stairs have become difficult.

Karmen used to teach textiles at the local high school, and now is a freelance jewelry maker and yoga teacher who would like to take up beekeeping. On the morning she wasn’t going to be home, she left a box of food at the door of our cottage and we made our own toast and Nescafe, ate apples and cheese. I wanted to ask her about her many tattoos, including one of what looks like a Hindu goddess decorating two-thirds of one arm.

Obviously, property owners are doing this because if you’ve got a well-kept place in a desirable city, you have a chance to make a tidy extra income. And hosts want good reviews, so they get more bookings. Still, in both places we felt much more like guests than customers. It felt less transactional and more like genuine hospitality.

Though Airbnb is born of modern times and technology, it almost seems a throwback to the art of innkeeping in much earlier eras when for a reasonable fee people opened up extra space in their homes, however humble, to strangers. And to me it’s somewhat remarkable in our suspicious age that people would do this. Hosts are making themselves and their things vulnerable by leaving their homes and appliances and personal belongings in the hands of unsupervised strangers. Guests are trusting that the space will be as advertised, and relying on the hosts for good information and functional plumbing.

It’s a system that operates on the assumption that people will be at their best, and the accountability is based on word of mouth. Airbnb hosts are welcoming strangers in ways we don’t tend to be very good at anymore. Maybe it’s the money that makes the difference, but I don’t think it’s just that. I’ve felt much less welcomed by hotels for which I’ve paid much more. And most of us would be uneasy leaving strangers alone in our homes no matter how much they paid us.

So there’s an art to this thing, or maybe a vocation. I want to learn from Camille and Karmen how to be better at this kind of generous, cheerful, trusting hospitality, and think about how to put it into practice with the strangers in my life.

Sara Zarr is the author of five novels for young adults, most recently The Lucy Variations, which the New York Times called “an elegant novel.” Her sixth, a collaborative novel with Tara Altebrando, came out December 2013. She’s a National Book Award finalist and two-time Utah Book Award winner. Her books have been variously named to annual best books lists of the American Library Association, Kirkus, Publisher’s Weekly, School Library Journal, the Guardian, the International Reading Association, the New York Public Library and Los Angeles Public Library, and have been translated into many languages. In 2010, she served as a judge for the National Book Award. In fall 2014, she received a MacDowell Colony Fellowship. She currently lives in Salt Lake City, Utah, with her husband, and online at www.sarazarr.com.