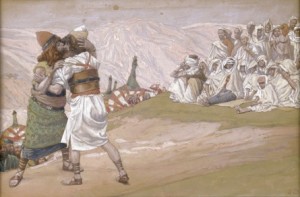 It feels silly to say I studied the classics because of slick marketing copy, but that’s what happened. When I was seventeen, I had no idea what to do with the glossy college viewbooks that began showing up in the mail. They offered up images of interchangeable gothic lecture halls, sunlit quads, and cheering, face-painted football crowds. They offered up equally sunny portrayals of happy, high-earning alumni in successful careers.

Amid that flurry came a flyer bearing names like Homer, Plato, Machiavelli, Descartes, Nietzsche, and Locke—names I knew nothing about, beyond some vague sense of their importance. It advertised a yearlong honors seminar on “Developments in the History of Western Thought” at Loyola University Chicago. The flyer had a message about asking big questions or thinking deep thoughts or some such language calibrated to appeal to pretentious high-school seniors. It probably had more gothic spires or Greek columns.

I was just as intrigued by what wasn’t there: no mention of MCAT scores or graduate-school acceptance rates or first-year average salaries. Spending a year studying classical texts seemed less intimidating than committing to a lifetime in medicine or law or anything else. I chose Loyola largely on the basis of that flyer.

The year began not with Homer or Plato but with a book I had actually heard of—the Book of Genesis. Our professors urged us to read it not as the infallible voice of truth, a literal account of science and history. Nor did they present it as a mere anthropological artifact, reflecting the biases of its authors and nothing more. They were introducing the idea of a great book, a text that yields up riches to both trained scholars and attentive novices.

At least that was the idea. When I sat down in my dorm room to read, twelve years of protestant Christian schooling and Sunday school classes came roaring back, drowning out any new word I might have heard. I had been taught to read the Bible as a package of practical moral lessons. Noah’s rainbow taught us about God’s love. The Tower of Babel taught us about the sin of pride. The Genesis stories in our assigned reading felt familiar and stale. I fought my eyes from glazing over on every page.

I realized how much I’d missed when one of our professors lectured about Jacob, the son of Isaac, scion of the nation of Israel. My Sunday school teachers portrayed Jacob as a sort of plucky underdog, but this professor described a ruthless, vile character. Jacob slid into the world clutching his twin brother’s heel, the second son in a culture in which the first-born inherited everything. From the moment of his birth, Jacob clawed after the position and privilege that his birth-rank denied him. He cheated his brother Esau and lied to his father on his deathbed. After fleeing home to live with his uncle Laban, he traded further deceptions with him.

Then our professor, Mark McIntosh, told a story I’d never heard before. After Jacob flees to his uncle, after he takes on wives and fathers children and builds a small fortune in livestock, he returns to his homeland years later. He brings lavish gifts for his brother: cattle, goats, sheep, donkeys, and camels, an elaborate peace offering to atone for the wealth he stole. He sends servants ahead with the animals and keeps his favorite wife, Rachel, in back with her child. If Esau and his men respond with a bloodbath, he wants them to escape.

Finally, Jacob returns to his brother. Esau runs to embrace him, and kisses him, and together they weep. To the gifts, Esau says, “I have enough, my brother; keep that thou hast unto thyself.”

It was a line I’d never noticed. Reading in my dorm room, I must have skimmed right over it. Here in the lecture hall, our professor was repeating the phrase with what looked like tears in his eyes: “I have enough.”

Those three words, he said, form a profoundly radical statement. They cut against the grain of the dominant culture, then and now. In pagan wisdom literature, McIntosh said, wealth must be stolen. The transformative claim of Genesis is that creatures generate wealth when they meet in communion—divine and human, human and human, plant and earth. The creative potential baked into the universe means we aren’t damned to a dog-eat-dog world.

At the end of that year, I was surprised to hear one of our professors say that this twelve-credit seminar should be the beginning of our study in the classics, not the end. I was still naive enough to think I could learn something as vast as the history of Western thought in a year. And I was still discovering how the notion of “great books” is complicated by questions of power and patriarchy: who gets to decide the canon, whose texts survive the ravages of history, and on.

I’ve been trying to understand why that story stays with me. As an eighteen-year-old full of nerves and worry, I could dimly sense the power of those words and why they excited my professor so deeply. Now, years later, I’m still wondering at their potential for changing my orientation to the world. To say “I have enough” is to renounce striving as a primary mode of being. It is to replace an economics of scarcity with an economics of abundance. It is to replace a posture of fear with a posture of trust.

Those words stay with me mostly as an idea I’ve failed to live up to. I still live hunched with worry and longing most of the time. But I hold on to them like a mantra. They are not a solution to striving but a possibility. They are promise I dearly want to trust, a window opening to reveal a picture of two brothers reuniting after years of conflict, embracing under the desert sun, with enough livestock, land, and kinship to go around.

Jonathan Hiskes writes at the Simpson Center for the Humanities at the University of Washington. Find his work at Jonathanhiskes.com.

This public domain image depicts the "The Meeting of Esau and Jacob" (watercolor circa 1896–1902 by James Tissot).