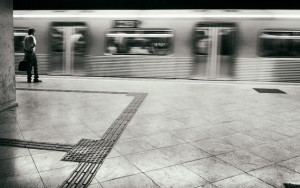 No doubt it was one of the more truly mortifying episodes I have ever experienced.

Right up there with the time my freshman year in college when, alone at a table in the quiet library, I thought I had successfully suppressed a particularly insistent bout of dorm-food gas; but so strained was the effort that when I relaxed prematurely there erupted what must have struck others in the library as the boldest fart in human history.

At least in that instance I could keep on reading Plato and not break my gaze as if nothing had happened, as if the shock of dumbstruck students at the periphery of my vision on both sides was altogether unfounded.

But this time there was no pretending otherwise.

There was a book in my hand, yes, as there was in the hands of many others on the subway when he boarded, a man who in addition to perhaps being homeless was certainly mentally handicapped, and possibly even drunk. Whatever the extent of his plight, it was impossible to understand the details given his garbled speech. But it was obvious what he wanted, even if he hadn’t thought to bring an empty cup for the occasion.

And while I could have kept on reading, as many others did and I sometimes do as well, the moment I looked up his eyes met mine from down the aisle in the crowded car. The glancing exchange lasted no more than a second. But when the hurtling train took a turn and shifting bodies blocked his eye line, he stepped aside to resume the desperate connection with a crooked smile and eyebrows raised like question marks: Yes? You?

Yes. Me. I was pegged, and we knew it. So I reached into my pocket while he made his way toward me, and thought that would be that. In other words: Let’s get this over with.

Little did I know he had a different sense of closure in mind.

Having traveled the New York City underground for a good sixteen years now, I’m still prone to cringe when the solicitations of a homeless person come my way. You’d think that after all this time I wouldn’t feel the glare of both heaven and earth as I debate my response.

But there it is, the glare if I give, and the glare if I don’t. Even if both conceits are really just forms of staring at myself, invariably I feel so publicly, so utterly watched.

Mostly I try to do what my conscience tells me, which is give, as opposed to what those posters from the Mayor’s office tell me, which is give instead to a charity of my choice because panhandling is illegal. (So is running for a third term, Mayor Bloomberg, but I guess that’s beside the point.)

But what I try to avoid all the same is having to pull out my wallet in any noticeable fashion and add to the already discomfiting spectacle.

On this matter, I am forever grateful to Father Mychal Judge, the Franciscan friar and chaplain to the New York City Fire Department who died in the World Trade Center on 9/11. Commissioned to write a screenplay about the man who was every bit the legend in life that he was in death, one day in my research I listened to a friend of his describe the way Judge would give money to the homeless on the street in the most inconspicuous way. Without a break in his gait or conversation with the friend, Judge would habitually pass off bills left and right with the right hand hardly knowing what the left was doing.

When the friend asked him how he did it, Judge explained his trick: you fold each dollar bills in thirds and keep a supply in your front pocket, so you never have to hassle with your wallet or how much to give. It’s a dollar bill every time—enough to buy a bagel or a coffee, but not a fifth of cheap booze—and it’s easily reached for the easy handoff.

Much was memorable that I learned about Mychal Judge; but here was something equally useful, seeing I’m not one to comfortably engage in public displays of altruism. I’ll play the Good Samaritan, but let’s first clear the road to Jericho of onlookers and passerby.

Why this is the case, I do and do not know. In a nutshell, I suppose: vanity of vanities.

But the fact that this is true in my case matters more than the why anyway. An example: even when I sensed almost audibly that a wan-looking man coming down 14th St. on blotto-pilot was going to trip on the cord strip laid across the sidewalk, I wasn’t the first one to respond when he ended up on the ground with blood streaming from his nose.

Perhaps this is why I let myself get pegged by the beggar on the subway, despite not having any folded bills in my front pocket: to force my solicitous, handicapped, and drunken ego out into daylight where it belongs.

But the beggar did not follow the usual protocol of hands crossing the chasm between haves and have-nots; instead, he got right up into my space and stood face-to-face with me as I pulled a bill from my wallet. The crooked smile straightened as I handed it over, and then he did the most unthinkable thing.

He threw his arms around me for a hug, for the entire subway to see. This time I really was being watched, and not just by my own self-conscious eye.

I almost died…but isn’t that the point?

Bradford Winters is a screenwriter/producer in television whose work has included such series as Oz, Kings, Boss, and The Americans. Currently he is showrunner on the upcoming CIA drama for Epix called Berlin Station, starring Richard Jenkins. His poems have appeared in Sewanee Theological Review, Spoon River Poetry Review, and Georgetown Review, among other journals. In August his comic book Americatown, about a near-future enclave of American immigrants abroad, was released by Boom! Studios. He lives in Brooklyn with his wife and three children.

The above royalty free image is attributed to Diego Torres Silvestre on Flickr.