The following editorial statement from issue 86 of Image is adapted from a commencement address given at the Seattle Pacific University MFA in creative writing graduation in Santa Fe on August 8, 2015. 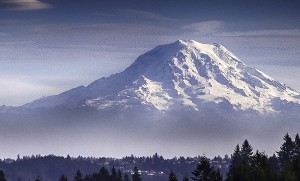 Denise Levertov’s poems nearly always contain vivid reminders of the oral nature of poetry, of poetry as speech addressed to a hearer, and thus in some sense always a conversation. In her seminal poem “Mass for the Day of St. Thomas Didymus,” Levertov chooses to honor the disciple of Jesus who, after the Resurrection, needed to place his hand inside Christ’s wound in order to believe.

“Didymus” means twin, and Levertov intends us to see that she is identifying herself as the other twin. Thomas will not be satisfied until he sticks his hand inside the emptiness in Christ’s flesh—the void or silence that will ultimately speak to him.

The poem, which is separated into the traditional parts of the Mass that are sung by a choir, begins with a Kyrie, a plea for mercy in the face of our terror at both our mortality and the potential destruction of the world itself. Here Levertov can only address a figure who is entirely “unknown.”

But as the poem progresses—moving from the Gloria, a hymn of praise, to the Credo, a statement of belief—the tone shifts. Now the poet is no longer a mere observer of potential doom. She chooses to take a side, saying: “Be, belovéd, threatened world.”

By the Sanctus, the speaker of the poem is convinced that even the “Vast Loneliness” of the universe can be given a “hearth” through the power of imagination. The imagination sends forth a song into what Levertov calls “the harboring silence.” Silence is thus no longer seen as a blank wall but a force that can provide shelter, rest, and replenishment.

In the Benedictus, Levertov blesses everything that contains the spirit, including

And the word, spoken out of silence, becomes flesh.

To whom is Levertov speaking? To us, of course—we who begin to recognize ourselves as her twin. But she is also speaking from the rift within herself to the mystery that abides in silence.

That is why in this “Mass” Levertov deliberately conflates poetry and prayer. Murray Bodo, Levertov’s friend and spiritual director, once said: “Both prayer and the poem are not there ahead of themselves, but are both known only in their doing. They cannot even be imagined except in the ‘words’ that make them, words that in the case of prayer may also be silences.”

In “Immersion,” a poem collected after her death, Levertov went further in her affirmation of silence as fullness of presence:

There is anger abroad in the world, a numb thunder,
because of God’s silence. But how naive,
to keep wanting words we could speak ourselves,
English, Urdu, Tagalog, the French of Tours,
the French of Haiti…

Yes, that was one way omnipotence chose
to address us—Hebrew, Aramaic, or whatever the patriarchs
chose in their turn to call what they heard. Moses
demanded the word, spoken and written. But perfect freedom
assured other ways of speech. God is surely
patiently trying to immerse us in a different language,
events of grace, horrifying scrolls of history
and the unearned retrieval of blessings lost for ever,
the poor grass returning after drought, timid, persistent.
God’s abstention is only from human dialects. The holy voice
utters its woe and glory in myriad musics, in signs and portents.
Our own words are for us to speak, a way to ask and to answer.

Thus the writer, facing silence and the blank screen, should be of good cheer. Braving the silence is still a demanding discipline, reminding us of Eliot’s call to “prayer, observance, discipline, thought and action.” You yourselves will at times be like the poor grass that returns after drought. But in the end Levertov persuades us that silence can speak and enable us to speak.

As writers, our job is “to ask and to answer.” And by “answer” Levertov doesn’t mean anything as foolish as “offer an explanation that exhausts the world’s mystery.” Rather, she is speaking of the need to be answerable, that is, responsible and responsive to that mystery.

To be answerable also means being patient and attentive. As critic James Dougherty has pointed out, Levertov moved to Seattle in 1989 and chose to live in a house with a view of Mount Rainier. “There she found,” Dougherty writes, “in the veilings and unveilings of Mount Rainier, an emblem of the presence of God and of the need for human constancy of attention…. She says of the mountain that ‘its vanishings / are needful, as silence is to music.’”

This is the mountain you graduates have seen—and not seen—many times on your Whidbey Island residencies over the course of this program. I hope you cherish your memory of it for a long time to come.

Now, as you go forth, may you be attentive to the silence, alert to its unveilings and vanishings. May your writing be a dialogue with the “myriad musics” of God’s silence so that we, your readers and hearers, may come to know more truly both the woe and glory of the world.